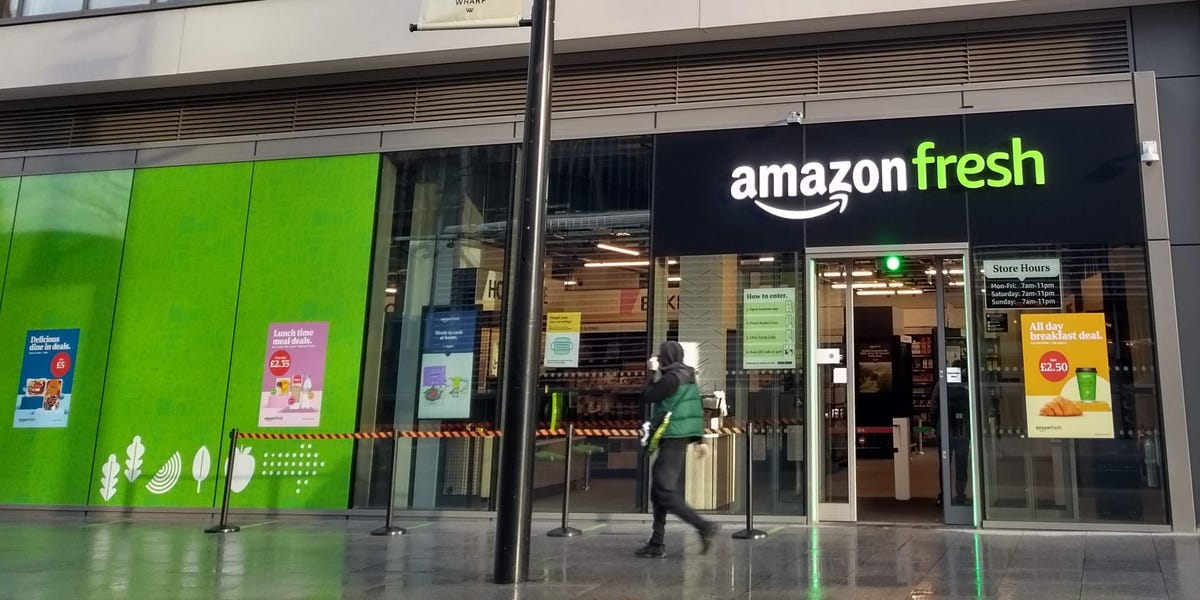 The ecommerce giant now has 17 stores across London, which operate under its Amazon Fresh brand and use Amazon’s Just Walk Out autonomous technology. The stores don’t have cash registers or cashiers and instead use sensors to monitor which products customers pick up.

I went to a store in Canary Wharf, London’s financial hub, to try it out.

The store’s window display was quite plain. There was a poster advertising a deal on hot drinks and pastries designed to lure commuters in …

… as well as instructions on how to actually enter the store.

To get in, you needed to scan a QR code on the Amazon app linked to your account.

I had downloaded the app before I set off to the store, but it seemed counterintuitive to me that the QR code to enter the store wasn’t under the “Grocery” tab on the app, which was dedicated solely to Amazon Fresh deliveries for Prime users.

Instead, I had to click on the basket item at the bottom and then click on “fresh code.”

Once I had a QR code, getting into the store was easy. I went on a Monday afternoon, and though the store wasn’t busy, there was a steady stream of customers throughout my visit.

The layout of the store was quite minimalistic, with a largely green and black color scheme.

Signs inside the store told you how the shop worked.

The store had everything you’d expect from a normal grocery store, including fresh produce …

… and a variety of plant-based options.

It was strange seeing Amazon’s logo on fresh food items like potato salad.

None of the Amazon-branded milk seemed to be organic, though.

Amazon also has a partnership with Morrisons, Britain’s fourth-biggest supermarket, including offering same-day grocery delivery for Prime members. Though most products in the Amazon Fresh store were either big-name brands or Amazon-own brands, I saw a few Morrisons items dotted on the shelves.

I was also surprised to see some cakes made by Booths, an upmarket supermarket chain with around two dozen stores in northwest England. Interestingly, I couldn’t find these cake on Booths’ own website. Booths sells its products online through Amazon Fresh, but as a small, regional supermarket I didn’t expect to see them in the store in London.

… with prices considerably lower than at coffee chains.

One of the machines only made drinks with oat milk.

There was also a stand with hot food …

On your way out there’s a station when you can grab sugar, napkins, and sauce, too.

There was also a bakery section selling fresh bread, doughnuts, and pastries.

Alcohol was available in a small room at the back of the store. To enter, you had to show a member of staff your ID.

There were lots of brands I recognized, including Corona, Budweiser, and Stella Artois.

I struggled to find any Amazon-own alcohol.

The store also had a small Amazon Hub for order pick-ups and returns.

Milk cost £1.30 ($1.70) for 4 pints, which is comparable with other UK grocers, and Amazon emphasized that it was from British farms. Overall, prices in Amazon Fresh didn’t seem any lower than other stores.

The store also sold meal deals, which are offered by many British supermarkets. Deals at other outlets usually allow you to get a main, drink, and snack like potato chips or a chocolate bar deals for £3 or £3.50 ($3.90 or $4.60).

But at Amazon, you paid for the main and then could add a drink and snack for £1 ($1.30) extra. Because I went for quite an upmarket salad, my meal deal ended up coming to £5.50 ($7.20). I’d never paid that much for a supermarket meal deal before.