America’s image around the world worsened by Portland police violence 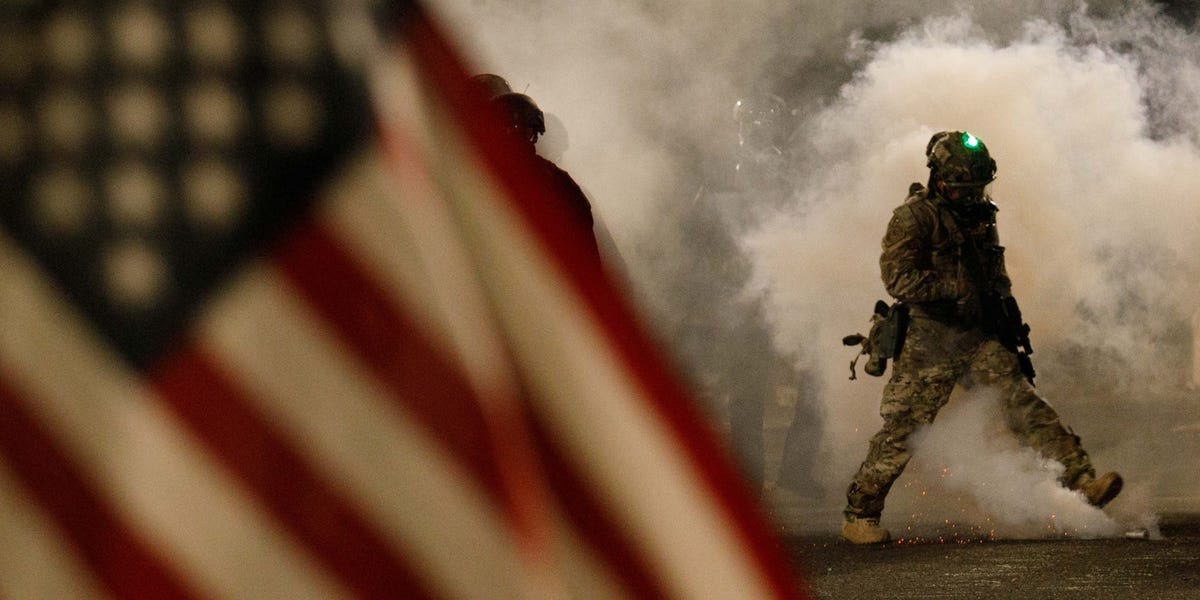 Last month, the European Union urged a foreign government to handle civil unrest with “full respect for the rule of law and human rights.” The country the EU admonished was not some war-torn dictatorship. It was the United States.

While this declaration may have seemed like excessive concern a few weeks ago, it now seems prescient after federal agents using paramilitary gear and tactics stormed Portland, rounding up protesters in defiance of its local and state government.

There’s a special irony in the fact that this police response came in reaction to a movement that grew out of protests over the abuse of police authority.

America’s international leadership was already precarious, and this brutal and tone-deaf response to legitimate public frustration further imperils it. Countries already resentful of America’s world-policing now watch in dismay as jackbooted federal officers, armed like warfighters and with dubious legal authority, descend upon its own people.

These images show a country largely unrecognizable to itself, debasing its most treasured values, and weakening its own moral authority and influence in the world.

The appalling acts of police violence in Portland and elsewhere throughout the past week feed a global impression of American hypocrisy, of a country plagued by the very sort of arbitrary cruelty it regularly denounces abroad.

This isn’t altogether new. As we remember Rep. John Lewis, we can’t forget his peaceful civil rights march across that bridge in Selma in 1965, during which police cracked his skull, and infamously injured dozens of others. But lately, this impression has intensified America’s reputation as a powerful country recklessly wielding its power.

In the eyes of many of its neighbors, America’s globe-spanning wars – on terror and on drugs – grow out of the same pathological fear of dark-skinned people that drives police brutality at home.

America can claim a quarter of the world’s economic activity and its military dwarfs that of its allies and adversaries alike. But its global leadership has less obvious origins. The allure of America’s values is critical to the success of its foreign policy objectives, and the desertion of those values, at home or abroad, is not just a moral failing, but a geopolitical blunder too.

After all, foreign leaders whose citizens are hostile to the US will more likely oppose American policies to win domestic political support. But leaders of countries with pro-American publics will feel pressured to cooperate with the US in ways that advance US national interests. America squanders the global appeal of its values at its own risk.

If a country’s international influence derives in part from the attractiveness of its values, that influence is diminished when it’s seen discrediting those values through capricious acts of violence against its own people – and against people in other countries too.

According to a recent international survey of 10 geopolitically important and diverse countries conducted by my organization, the Eurasia Group Foundation, resentment over America’s unrestrained foreign policy was the biggest determinant of anti-Americanism abroad, after the dislike of President Trump.

The system that treats the symptoms, not the cause

American policing and American foreign policy suffer from similar ills. In both cases, tax dollars are spent excessively to treat symptoms while all but ignoring underlying causes.

The US has doubled public spending on law enforcement since 1970, while cutting funding for social programs which reduce the conditions that contribute to crime. Likewise, military spending has climbed to astronomical levels while funding for diplomatic efforts which could prevent conflict has declined.

And much as America uses its military where intervention is unnecessary or counterproductive, its police over-enforce many laws which ineffectively criminalize social problems like homelessness or drug use and addiction, needlessly increasing the number of potentially violent police interactions.

Perversely, by policing the symptoms rather than the root causes of societal and national threats, the US has created new threats. The twin tendencies to militarize its communities and police the world weren’t inevitable, and are more intertwined than some might realize.

Clinton-era policies which allowed the Defense Department to transfer surplus military equipment to local law enforcement metastasized with the sprawling wars in Iraq and Afghanistan. A bipartisan effort to overturn these policies was defeated on Tuesday in the Senate, but lawmakers should persist. After all, how do you get police officers to act less as warriors and more like guardians – as an Obama administration task force recommended in the wake of the 2014 protests in Ferguson – if you keep equipping them with weapons of war?

Calls to defund the police might seem radical until one considers the historically high amount of taxpayer dollars being spent on law enforcement. There’s a line in the Bible which reads, “for where your treasure is, there your heart will also be.” Democratic presidential nominee Joe Biden has said as much with a more secular spin: “Don’t tell me what you value — show me your budget and I’ll tell you what you value.”

Right now, the United States is a country that apparently values sending grenades and assault rifles – and 600 mine-resistant ambush protected vehicles (or MRAPs), made for the Iraqi battlefield at nearly $1 million a pop – into its communities.

The tense and fiery conversations taking place across the country – among protesters on streets, corporate board members on Zoom calls, and opinion writers on editorial pages like this one – have spread internationally. Protests over George Floyd’s killing have inspired France to confront its own legacy of racist policing, and emboldened Africans denounce their own countries’ police abuses as they invoke the Black Lives Matter movement.

The United States remains an agenda setter in possession of durable and attractive ideals. If striking scenes of police violence reveal it is not living up to its promise of equal rights for all, striking scenes of public protest reveal that America is still a vibrant democracy capable of reforming and improving itself – and inspiring other countries to do the same.

Mark Hannah is a senior fellow at the Eurasia Group Foundation and the host of its None Of The Above podcast.