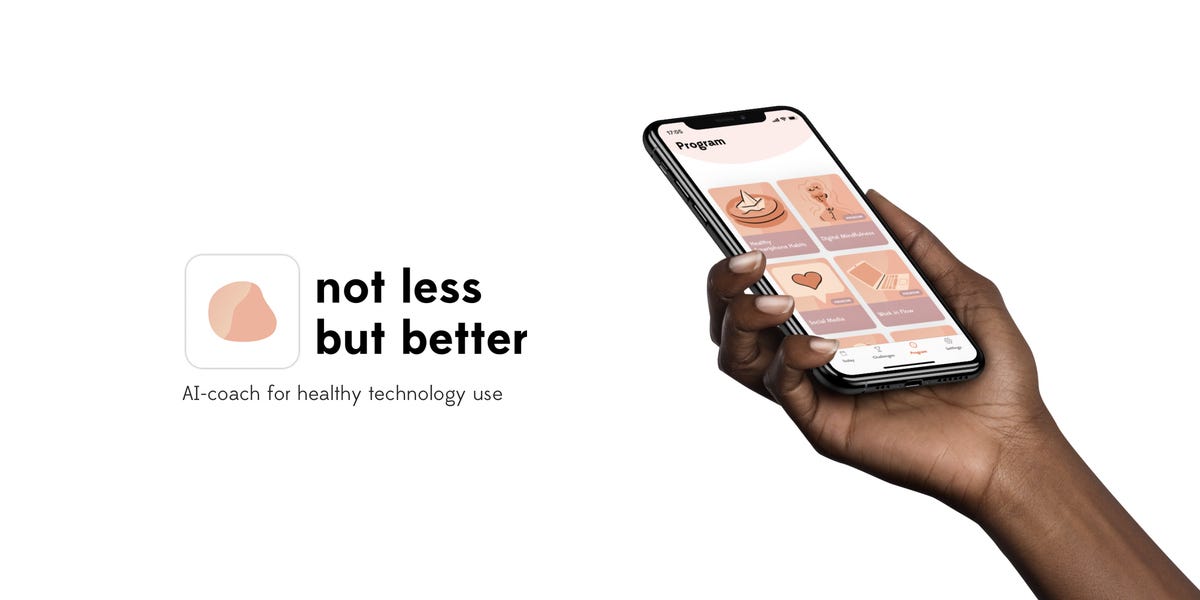 A startup that wants you to have a healthier relationship with your phone has raised 940,000 euros ($1 million) in a pre-seed round.

Not Less But Better is a digital-wellness startup that offers daily micro-training based on cognitive behavioral therapy to tackle phone addiction, binge-watching, and dating-app usage.

The Berlin startup, which was founded in 2020, provides tips on how to stop platforms from autoplaying content and is building out real-time interventions, dubbed a “companion,” to notify people when to put down their phones.

“What the content app is doing right now is teaching you the skill to observe yourself, so you catch yourself when getting lost,” said Christina Roitzheim, a cofounder and the product lead.

Roitzheim said users had asked for a way to inform them when they had become “lost” to their phones. “That got us thinking: Is there a way that we do not have to teach our users how to not get lost, but that we can actually build a tool that helps them?” she said.

Not Less But Better participated in Factory Berlin’s Stealth Mode accelerator for female founders and founders from diverse backgrounds, where it lured final investors into a pre-seed round that was already underway.

Roitzheim was rejected from the program three times before making the cut. She said she took it personally at first, before finding the voice of reason and reaching out for feedback and support.

“You learn to manage your ego, being a founder — so many rejections all the time,” Roitzheim said. “I asked the people who sent me the message if we could maybe sit down and talk about why they think the timing is not right yet.”

Elsewhere, the startup tapped into the female investor network Encourage Ventures in an effort to establish a diverse cap table. Almost half of the company’s angels are women. The $1 million round also included investments from Sebastian Klein, a cofounder of Blinkist, and Ina Schlie, a former senior vice president at SAP.

Georgie Smallwood, the chief product officer of Tier Mobility, and Jesaja Brinkmann, a co-CEO of Cara Care, are also joining the startup’s board.

The startup plans to invest in its technology and product, specifically in the AI-driven real-time interventions, with its fresh funds. The interventions would be hyper-personalized, the startup said, taking into account personal information and the time of day.

The nine-person company also intends to grow to about 14 by the end of 2022.

Check out the startup’s redacted pitch deck below.