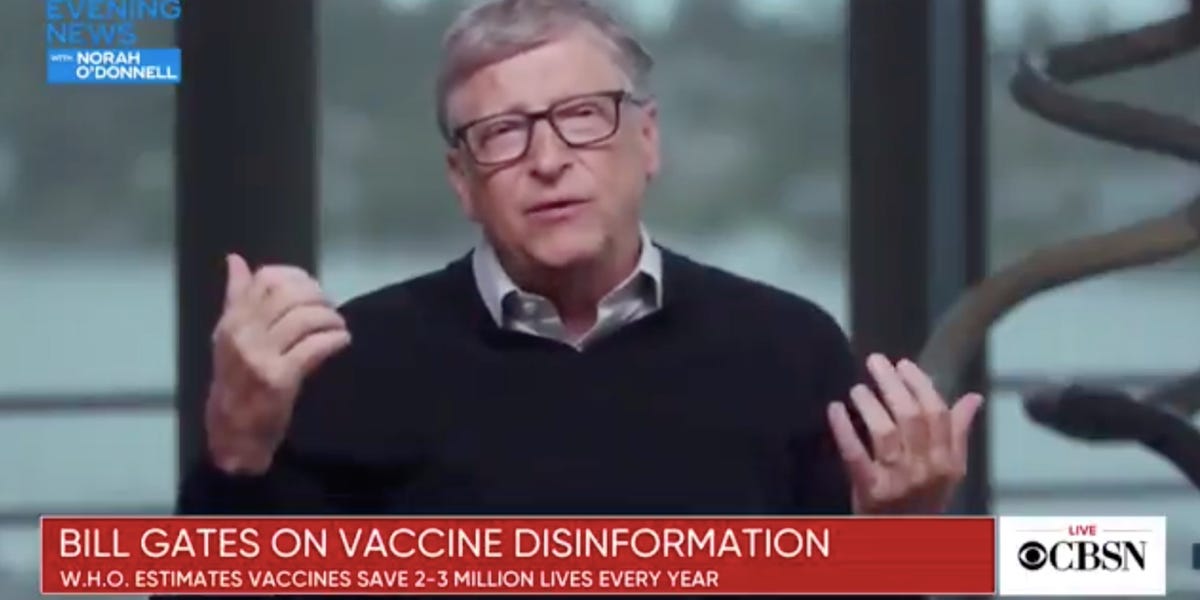 Bill Gates has shot down a conspiracy theory that he wants a mass coronavirus vaccine developed so he can use it to plant microchips in people.

The billionaire made the remarks in a Wednesday interview with “CBS Evening News with Norah O’Donnell,” where he was asked about the coronavirus pandemic and vaccine development, as well as the unsubstantiated theory about Gates’ motive for wanting a vaccine.

Noting that conspiracy theories have spread about Gates during the pandemic, O’Donnell said: “The posts on social media about you and coronavirus are considered the most widespread coronavirus falsehoods that exist.”

She asked: “To be clear, do you want a vaccine so that you can implant microchips into people?”

Gates shook his head and responded: “No. There’s no connection between any of these vaccines and any tracking type thing at all. I don’t know where that came from.”

You can watch the exchange here:

O’Donnell then pointed to the results of a May 2020 poll run by YouGov and Yahoo News, which found that 44% of Republicans, 19% of Democrats, and 24% of independents believed that Gates wanted to use mass vaccination to give people tracking implants.

O’Donnell asked: “How did this conspiracy start?”

Gates replied: “I don’t know,” noting that he and Dr. Anthony Fauci, the director of the National Institute of Allergy and Infectious Diseases, have been among the most-discussed people during the pandemic.

He also said some of the theories are “deeply ironic,” given his work to promote global health.

The Microsoft cofounder has in recent years become a leader in the public health space, having creating the Bill and Melinda Gates foundation with his wife. The organization aims to improve global health and reduce poverty, and had promoted vaccine research and access long before the current coronavirus pandemic.

The foundation is helping support the creation of vaccines against COVID-19, which experts say are very likely necessary before the world can return to normal.

Gates has also warned about pandemics and urged world leaders to take action to prepare for years before the current outbreak.

He said on Wednesday: “Our foundation is about reducing death and bringing equity to health,” but some people still get “the idea that we get accused of creating chips or the virus.”

“I think we just need to get the truth out there, we need to explain our values, so tht people understood why we’re involved in this work and why we’re willing to put hundreds or billions to accelerate the progress,” he said.

Ultimately, about the microchip theory, he said: “It’s a little unclear to me, but I hope it will die down as people get the facts.”

The BBC investigated the theory in late May, but said that it “found no evidence to support these claims.”

It pointed to statements made by Gates in March as a possible spark for the rumor, when he said that at some point “we will have some digital certificates” to show who had been tested for, recovered from, and vaccinated against the coronavirus.

A popular article on Facebook, which propagated the conspiracy theory, referred to a study funded by the Gates Foundation into the possibility of a special link — like an invisible tattoo — that could record testing and virus information on people without using any tracking or databases. This technology has not been rolled out at all.

Neither Gates nor his foundation has ever mentioned microchips, however. The Bill and Melinda Gates Foundation also told the BBC that the rumor was “false”.

Gates said in June that it was “almost hard to deny” the conspiracy theories surrounding him and vaccines “because it’s so stupid.”

“I’ve never been involved any sort of microchip-type thing,” he said, adding: “It’s almost hard to deny this stuff because it’s so stupid or strange.”

In the CBS interview, O’Donnell said Facebook has not removed a popular article substantiating the rumor about Gates and microchips. It is not clear if she was talking about the same one the BBC reported.

She asked Gates if Facebook had a “responsibility” to do more to combat such misinformation.

Gates replied: “They are willing to get rid of anti-vaccination messages that are false there, so there’s a constant dialog about how do they make sure that these completely false things don’t get out there.”

“You don’t want to suppress normal dialog about safety studies, but the conspiracy theories, they are starting to step up on, and we feel like we have a good dialogue with them about how to do that.”