‘Black Guns Matter’ teaches Black Americans how to use firearms 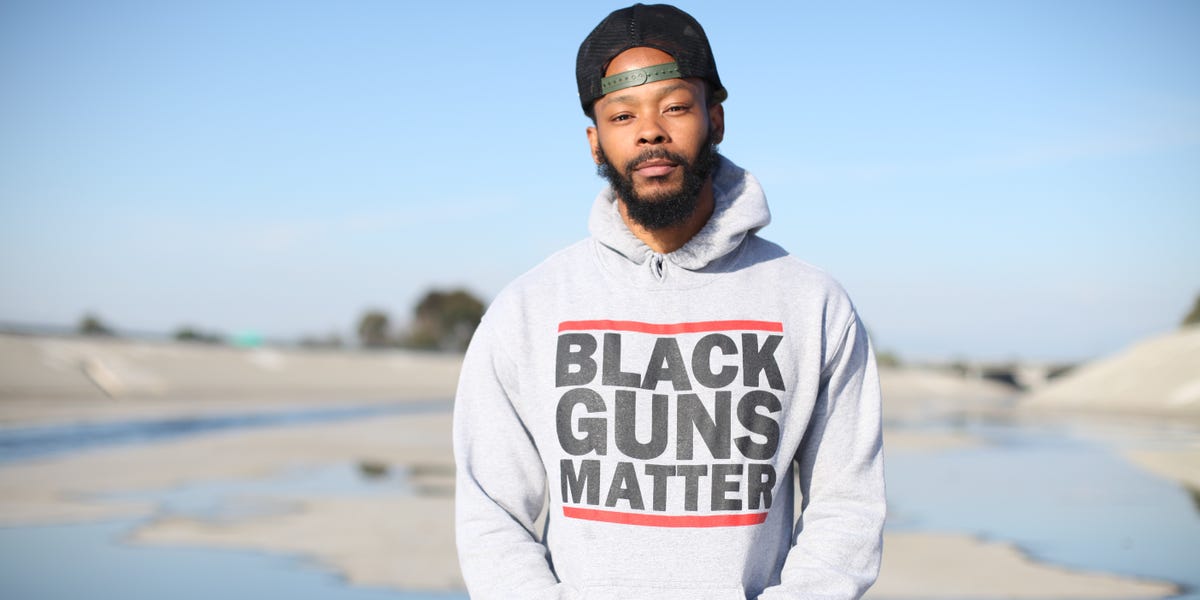 Grief and rage swept the country after the police killing of George Floyd in Minneapolis, Minnesota, in late May. His death renewed debate about racialized police violence and the disproportionate killing of Black Americans, who are up to four times likelier than white Americans to be killed by police.

That debate has typically centered on policing itself. But Maj Toure, the founder of Black Guns Matter, has taken another tack: Advocating for Black Americans to take up arms for self-defense.

While many argue that the way to prevent violence is to have fewer guns, he says the opposite.

“I believe that more Black people would be alive if they were armed,” Toure told Business Insider Weekly.

“So when I hear ‘unarmed Black man,’ I’m sad,” he added, “because there should be no such thing.”

When protests erupted in late May, Toure bought a flight to Minneapolis, where he began teaching crowds about self-defense and Black Guns Matter just a few blocks from Floyd’s memorial.

“If you would like a free basic firearm safety class, you can get it right here,” he told a group of passers-by, setting up a table with replica handguns. “The police, as we see, will leave. They will not come to save you. They will not save our businesses. So if you want that, I’ll do that here. Anyone can come. It is completely free.”

At his class, he demonstrated for crowds proper firearm technique, ran through attacker scenarios, and occasionally challenged the views of spectators who disagreed with his approach.

One common criticism is that gun ownership alone is not enough to protect Black Americans from a criminal justice system perceived as systemically racist.

“What we do know is that when Black people do have guns, they are still shot and killed by police or by other bystanders,” said Amber Goodwin, founder and executive director of the Community Justice Action Fund.

“Breonna Taylor — her boyfriend Pat was lawfully owning a gun, and she was still shot and killed. And so I think the issue was larger than just give people Black people guns.”

About a quarter of Black Americans said they are gun owners in a 2017 survey, compared to 36% of white Americans, according to a 2017 Pew Research Center survey.

But the National African American Gun Association says ownership among Black people is growing — nearly 15,000 new members have joined so far in 2020, according to the founder.

“A lot of times in our community, we are a lot of our politicians, unfortunately say, don’t have a gun. You don’t need a gun. Well, I pushed back on that and say, that’s the very thing that we do need,” founder Philip Smith said.

Black Guns Matter itself has seen a huge spike in interest recently — “phone calls are up about four to six extra a day,” Toure said.

It’s a substantial change since Toure started the organization in 2016 to help Black Americans navigate gun-ownership laws and protect themselves, he said.

“We saw so much ignorance going on,” he said. “Guys that lived in rough neighborhoods may have been missing some information in order to carry a firearm on their person.”

“So what we in essence did was we created the space to let people know what was their process and what process it was of getting a firearm, lawfully carrying it on their person if they chose to, while being safe and responsible.”

As Toure advocates for increased gun ownership, the country remains wracked by gun violence, which is also split along racial lines. Black Americans are 10 times more likely than white Americans to die by gun homicide, and a majority of Americans feel that sales of firearms should be stricter, a recent Gallup poll found.

Nationally, the gun-control debate often falls on partisan lines, with 86% of Democrat and Democratic-leaning independents favoring stricter gun laws, and 31% of their Republican counterparts opposing them, according to Pew. Toure himself ran for a Philadelphia city council seat as a Libertarian, and has spoken about Second Amendment rights at events with conservative lawmakers.

One thing he repeats: Systemic racism has stacked the rules around gun control against Black people.

“I pick my words very carefully: All gun control is racist,” Toure said. “Whether they change it to make it look like, you know, you got to pay a fee, you got to do this, you do that.”

Historians say the links between gun control and racial discrimination go back to slavery and, later, Black Code laws that forbade African Americans from owning guns.

“Gun control in America was initially created to stop melanated beings from having arms,” Toure said.

In the 1960s, the Black Panther Party for Self-Defense advocated for the right to bear loaded arms in public with the goal of protecting Black neighborhoods from police.

Ronald Reagan, then the governor of California, signed a bill outlawing open-carry in 1967. And the National Rifle Association, usually a stalwart supporter of gun rights, advocated gun-control laws at the time.

Today, the NRA opposes most restrictions on firearms. But Toure canceled his membership last year, saying the organization wasn’t doing enough for Black communities. The NRA did not respond to Business Insider Weekly’s request for comment.

When Toure walks into a Black Lives Matter crowd and meets so many people who have never touched a gun before, his work feels all the more pressing.

“People somehow forget that we have the right to defend our lives with firearms,” he said.