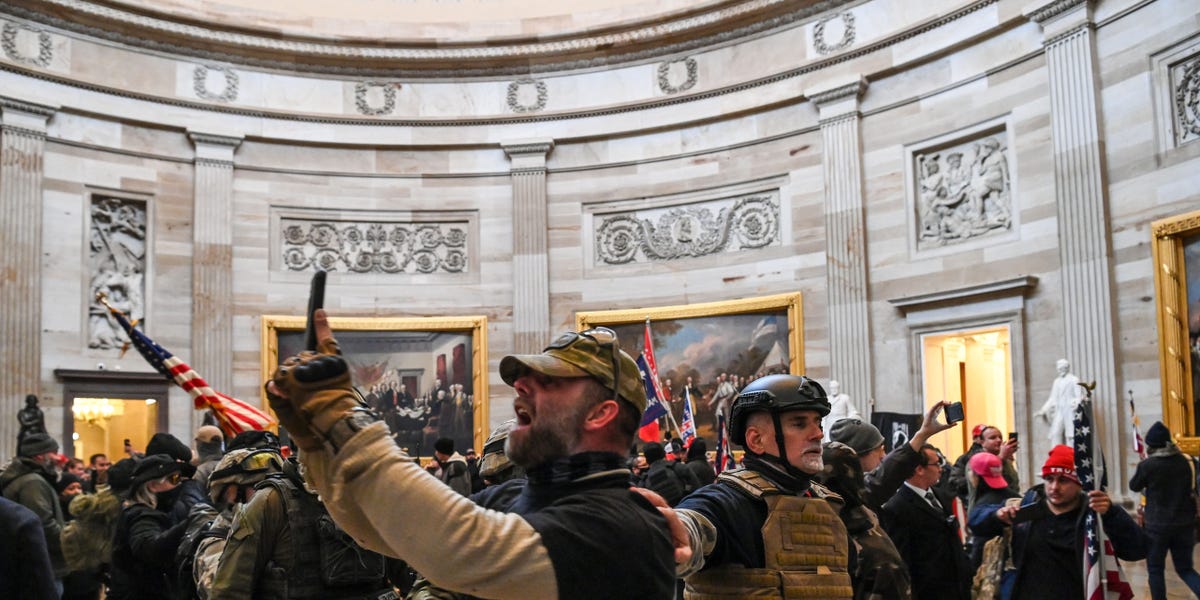 Marriott International, Morgan Stanley, and the Blue Cross Blue Shield Association have all said they will pull political donations to Republican members of Congress who voted against certifying President-elect Joe Biden’s electoral victory.

And financial giants including JP Morgan and Citigroup have said they will temporarily pause all political donations to both the Republicans and Democrats, in the wake of pro-Trump rioters storming the Capitol Wednesday.

Congress met on Wednesday to certify the result of the US presidential election. Fueled by months of conspiracy theories and baseless allegations of election fraud pushed by President Donald Trump and his backers, rioters stormed the Capitol. Five people died during the siege.

Vice President Mike Pence had declined to go along with the plan.

Read more: Lawmakers, Hill staffers, and reporters recount the harrowing experience as a violent pro-Trump mob broke into the Capitol to protest the electoral-vote count

In response, companies including Marriott, Morgan Stanley, the Blue Cross Blue Shield Association, and Commerce Bank said they would stop political donations to those Republicans who backed Trump’s election challenge. Goldman Sachs is likely to follow suit, the Wall Street Journal reported. JP Morgan said it would pause all political funding, to both Republicans and Democrats, for at least six months, and Citigroup for the remainder of the quarter.

“Just coming out with another public letter isn’t going to do much,” Thomas Glocer, former CEO of Thomson Reuters, said last Tuesday following a meeting of top CEOs where they discussed the impact of pulling political donations.

Employees are able to donate to political parties through Political Action Committees (PACs), which pool donations from members.

Marriott, the world’s largest hotel chain, told Insider it made the decision to pull funding following the siege.

“We have taken the destructive events at the Capitol to undermine a legitimate and fair election into consideration and will be pausing political giving from our Political Action Committee to those who voted against certification of the election,” a spokeswoman said in an email.

Morgan Stanley would also halt donations to the GOP lawmakers who voted against certifying Biden’s win, a spokesperson confirmed to Bloomberg. Goldman Sachs is also developing measures in response to the siege, a spokesperson told the publication, which reported the measures would likely include stopping donations to politicians who backed Trump’s election challenge.

Commerce Bank is similarly halting PAC contributions to officials who “have impeded the peaceful transfer of power,” while the Blue Cross Blue Shield Association, which provides healthcare coverage to around 100 million Americans, said it will suspend contributions “to those lawmakers who voted to undermine our democracy.”

JPMorgan Chase, meanwhile, said Sunday it will pause all PAC contributions for at least the next six months

“The focus of business leaders, political leaders, civic leaders right now should be on governing and getting help to those who desperately need it most right now,” it told Reuters in a statement. “There will be plenty of time for campaigning later.”

Citi, whose CEO Michael Corbat said he was “disgusted” by the riots, said it will also halt all PAC donations up to April.

Its PAC raised around $740,000 for federal candidates in the 2019-2020 cycle, the Wall Street Journal reported, citing information from the Center for Responsive Politics. This includes a $1,000 donation to the campaign of Sen. Hawley.

“We want you to be assured that we will not support candidates who do not respect the rule of law,” Citi said in an internal memo to employees last week, first reported by Popular Information.

“We intend to pause our contributions during the quarter as the country goes through the Presidential transition and hopefully emerges from these events stronger and more united.”

Hawley’s office did not immediately respond to a request for comment.

A number of corporations have condemned the insurrection as an assault on US democracy. Apple, Google, Microsoft, IBM, and Facebook have all condemned the attack. Leaders in the auto industry, including General Motors CEO Mary Barra and Ford CEO Jim Farley, have also issued statements denouncing the rioters. Ice-cream band Ben & Jerry’s called for the impeachment of Trump and Coca-Cola called the riots “an offense to the ideals of American democracy.”

Some of Trump’s staunchest supporters also distanced themselves following the riots. Blackstone chairman, CEO, and co-founder Stephen Schwarzman — a longtime Trump ally who previously defended the president’s election lawsuits during a call with top American CEOs — said he was “shocked and horrified.”

“The insurrection that followed the President’s remarks today is appalling and an affront to the democratic values we hold dear as Americans,” Schwarzman said in a statement to Insider.

Meanwhile, Simon & Schuster, one of the “Big Five” publishing houses, canceled the scheduled publication of Hawley’s upcoming book “The Tyranny of Big Tech.”

Hawley responded that “Simon & Schuster is canceling my contract because I was representing my constituents, leading a debate on the Senate floor on voter integrity, which they have now decided to redefine as sedition.”

The publishing house said it did not come to the decision lightly.

“As a publisher it will always be our mission to amplify a variety of voices and viewpoints: at the same time we take seriously our larger public responsibility as citizens, and cannot support Senator Hawley after his role in what became a dangerous threat to our democracy and freedom.”