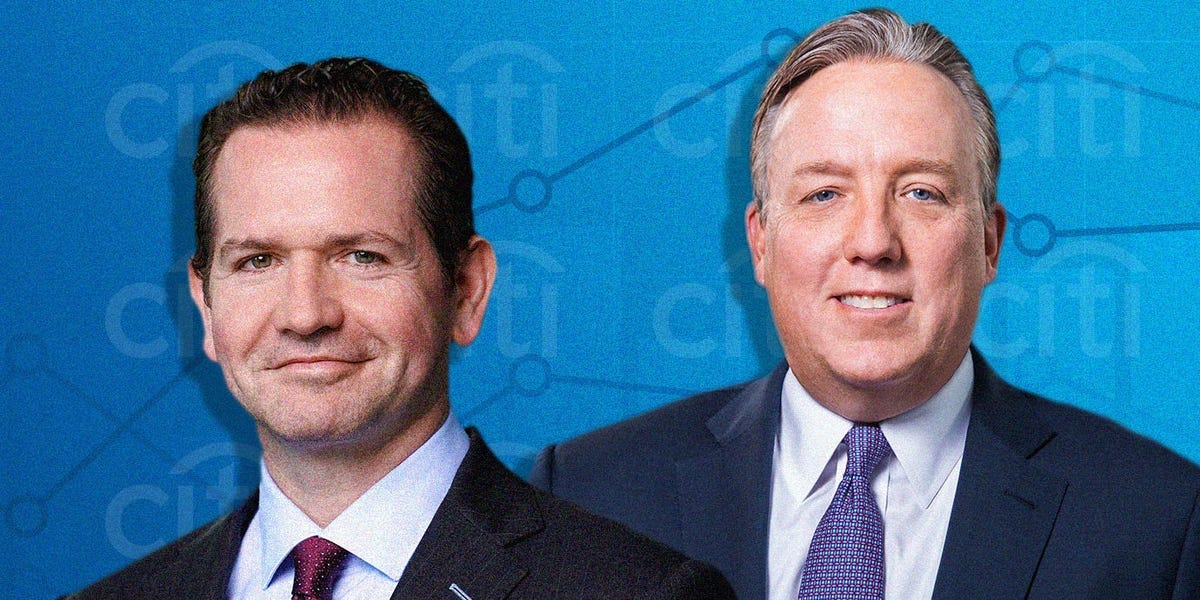 Top brass in Citi’s investment-banking unit are adamant the lender will not shy away from competing against Wall Street peers when it comes to poaching talent and winning deals — even after a spate of banker departures and questions about the firm’s standing in investment banking.

Philip Drury, the global head of technology and communications, told Insider in an interview that he wants the group to be a “global leader.” To get there, he’s willing to think outside the box when it comes to winning deals, motivating Citi’s bankers, and recruiting top talent.

He likened his ambitions for tech and communications to what he learned playing rugby in the 90s for professional club London Irish, under England’s World Cup-winning coach Sir Clive Woodward.

“Forget that you’re a center or a wing,” Drury told Insider, referring to specific positions on a rugby team. “You want the best 15 players on the field. We didn’t think we played a specific position, we’re part of a team and we worked together. That’s one of the concepts behind super groups — convergence and collaboration.”

The investment bank, however, has faced complaints from some of its junior ranks about supposedly disappointing bonuses this year, while others said Citi had allocated more bonus payments in the form of stock, rather than cash. That’s in addition to an FT report last month that said Citi would allocate most of the capital it earned from selling international retail businesses to its trade and treasury services department, commercial banking for mid-sized companies, and wealth management, leaving less for the investment bank.

Speaking at the bank’s investor day earlier this month, Chief Executive Jane Fraser sought to dismiss suggestions that investment banking had become a lesser priority. She said Citi was “hiring more top talent,” and that the bank was merely shifting focus to be more heavily weighted towards growth companies in industries like healthcare and technology.

To highlight Citi’s spending on the investment bank, Fraser said the bank had hired 70 managing directors across its super groups, including 40 located in North America.

The hiring frenzy is expected to continue this year, executives told Insider, including Drury, who’s in charge of Citi’s largest super group.

“The mandate I’ve got is to scale this team, meaningfully,” he said.

Analysts, however, reckon it’s a tall order for Citi to increase its share of the investment-banking pie, especially with the foothold peers like Goldman Sachs, JPMorgan, and Morgan Stanley have in M&A and equity capital markets.

“What stood out to me is that in most asset classes, it’s going to be very hard for Citi to envision cracking the top three,” said Richard Ramsden, who leads investment research on financial institutions at Goldman Sachs. “The barriers are high and the cost of investment is so high.”

Three Citi bankers that spoke to Insider said it was unlikely the bank would crack the top three, especially in M&A and equity capital markets, where companies value advice over lending capabilities. One of the bankers said Citi climbing higher in the league tables was “a pipe dream.”

Ramsden said Citi would be better-placed to “cherry pick” the areas where it’s more competitive, like trade and treasury solutions, and commercial banking, rather than going all-in on trying to top investment banking.

Citi, in a way, has acknowledged this approach. It outlined plans in a March 7 press release to hire 900 people in the next three years in its commercial bank, which serves mid-sized companies.

And trade and treasury, which offers services like holding funds and payment processing, will get a $1 billion injection to its tech budget. It intends to target more middle-market companies and fintechs, which could one day do business with the investment bank, Insider previously reported.

Drury was buoyed by Citi’s plans to boost commercial banking and trade and treasury services. There’s a chance this can translate to greater business at the investment bank as young companies seek financing or advisory services for potential share offerings or M&A opportunities.

“A commitment to the commercial bank is great for our tech business because that means we’re going to start covering clients even earlier in their life cycles,” he said.

Drury said he’s got a license to continue to “make significant investments” to Citi’s tech and communications unit.

“You’ll see us out there competing to attract client-facing bankers across the spectrum in tech, communications, and fintech to complement the strong players we currently have on the bench,” Drury said.

One unique way Drury is motivating his bankers is through the introduction of a high-performance coach.

Ben Fennell, a former college-level rugby player and founder of The Growth House in London, is partnering with Citi’s tech and communications team over the next 12 months on a program to focus on behaviors, mindset, and culture within the group, Drury said.

“We’ve proven that we’re willing to add into places. But I do think in the last couple of years, talent acquisition has become more competitive. It’s always been a distinguishing factor as to why a CEO or CFO selects a bank,” Dickson said.

Having experienced bankers like Drury and Adams at the helm of super groups is comforting for clients. It shows that Citi is allocating proven dealmakers to the sectors it cares about, according to Dickson.

Herb Yeh, the global head of tech investment banking, who departed Citi after nearly 10 years for Evercore earlier this month, is one example.

The formation of super groups meant that Yeh was effectively “layered,” meaning that his reporting line was changed, according to two people familiar with the situation.

When asked if the creation of super groups and the introduction of senior bankers like Drury and Adams caused any tension, Dickson said no.

“What the people in those groups see is confidence, commitment, and direction supported by people who have been successful. That should give them increased confidence that we’re going in the right direction,” Dickson said.