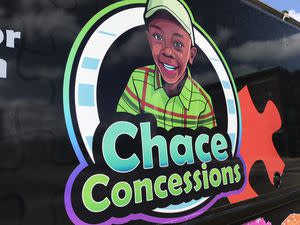 Tae Winston wanted her son with autism to feel appreciated in this world, so she came up with a creative idea last year.

Her idea was to have a food truck where her son and other young people with disabilities could work.

Sunday, that idea became a reality.

Winston welcomed the community for a soft opening of the “Chace Concessions Food Truck”, named after her son Chace.

Chase has been through a lot.

“My son almost passed away three times, he had cancer twice and COVID on top of autism. It’s kind of sad for him and just want him to feel appreciated and loved no matter what he’s went through,” Winston said.

They sell everything from soft pretzels to hot dogs, some of her son’s favorite food.

Chace was there, helping out at the truck.

Winston told News Center 7 that having the community come up to support her and her son was everything.

>> Local recovery home gives back to community with litter cleanup

“It just means so much because a lot of people didn’t even know what autism even was until the truck so now I can see the awareness is being spread,” she said.

On the first Sunday of each month, Winston plans to donate 50 percent of the proceeds to The Autism Society of Dayton.

The grand opening will take place at the Payne Recreation Center in Moraine on April 30.