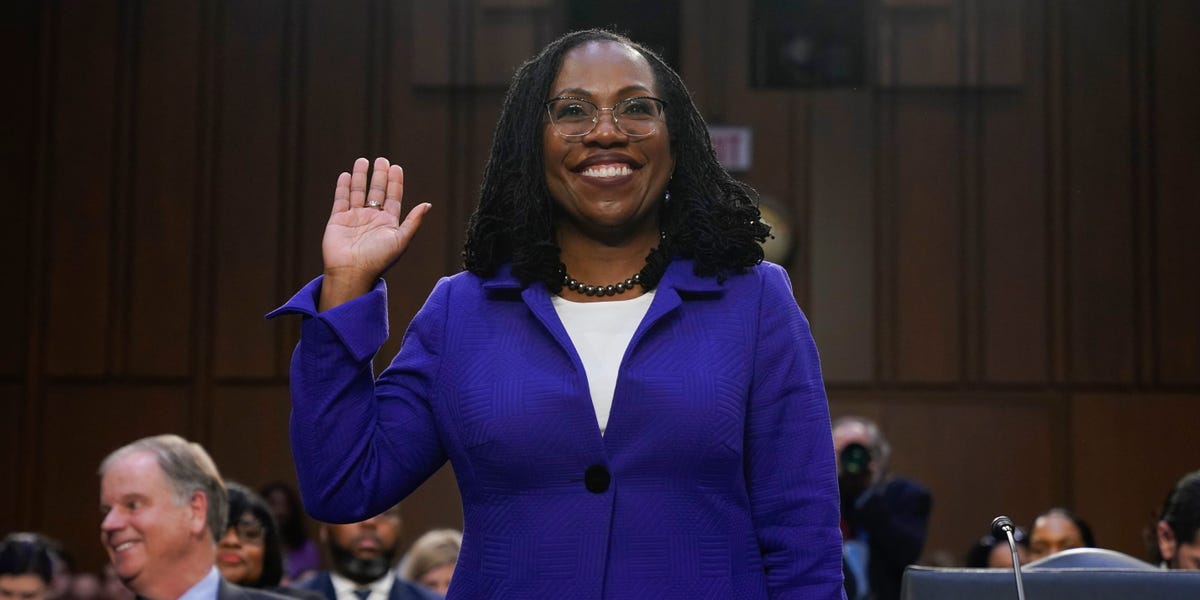 All 22 members of the Senate Judiciary Committee delivered opening statements on the first day of Jackson’s confirmation hearing, lasting over four hours.

Excitement ran high among Democrats, who mostly stuck to a script that highlighted Jackson’s legal background and her qualifications to serve on the nation’s top court. They took turns outlining her resume, which includes a series of legal clerkships, along with stints in private practice, on the US Sentencing Commission, as a public defender, and a federal district judge.

“Your record is one of excellence and integrity,” Democratic Sen. Dick Durbin of Illinois, the committee chairman, told Jackson on Monday. “Throughout your career, you have been a champion for the rule of law.”

Jackson, 51, currently sits on the US Court of Appeals for the DC Circuit, a seat that President Joe Biden appointed her to last year. Biden nominated Jackson to the Supreme Court last month to replace the retiring Associate Justice Stephen Breyer, whom she also previously clerked for. If confirmed, Jackson would become the first Black ever woman on the Supreme Court.

Before Jackson faces questioning from the committee this week, Democrats seized the opportunity on Monday to repeatedly emphasize the history-making moment.

“Please, let me just acknowledge the fact that this is not normal,” Sen. Cory Booker of New Jersey said. “It’s never happened before. The Senate is poised right now to break another barrier. We are on the precipice of shattering another ceiling – another glass ceiling. It’s a sign that we as a country are continuing to rise to our collective cherished highest ideals.”

For Republicans, however, the enthusiasm around Jackson’s nomination fell flat beyond initial congratulatory remarks. Several of them diverted attention away from Jackson’s credentials and background, and instead targeted Democrats over how they handled Kavanaugh’s confirmation hearings four years ago.

Sen. Chuck Grassley of Iowa, the top Republican on the committee, invoked the tense confirmation fight in the first couple of minutes of his 10-minute statement.

“We won’t try to turn this into a spectacle based on alleged process fouls. Good news, on that front, we’re off to a very good start,” Grassley said. “Unlike the start to the Kavanaugh hearings, we didn’t have repeated, choreographed interruptions of Chairman Durbin during his opening statement like Democrats interrupted me.”

Grassley and several other Republicans on the committee brought up Democrats’ treatment of Kavanaugh ahead of Monday’s confirmation hearings, indicating that they aim to approach Jackson with respect and fairness.

“When we say that this is not Kavanaugh, what do we mean?” Sen. Lindsey Graham of South Carolina said Monday. “It means that Democratic senators are not going to have their windows busted by groups. That’s what it means.”

The Supreme Court confirmation hearings for Kavanaugh, former President Donald Trump’s nominee, garnered national attention after the judge was accused of sexual assault. Kavanaugh faced immense public attacks as the hearings centered on the allegations, which he denied. Republicans at the time accused Democrats of trying to tank Kavanaugh’s nomination. Kavanaugh was confirmed to the court with only one Democratic vote.

Beyond recounting Kavanaugh’s fight, Republicans stressed what they would like to hear from Jackson during the confirmation process. Several of them said they want to learn more about her judicial philosophy, as well as her views on rights like free speech and abortion.

For her part, Jackson on Monday described herself as an independent jurist who, if confirmed, will “support and defend the Constitution and this grand experiment of American democracy that has endured over these past 246 years.”

“I decide cases from a neutral posture. I evaluate the facts. And I interpret and apply the law to the facts of the case before me without fear or favor consistent with my judicial oath,” Jackson said during her opening statement.

After the hearing wrapped up, Durbin reacted to his Republican colleagues rehashing the Kavanaugh hearings, saying “this isn’t a history class.”

“Listen, we all learn from life experiences,” Durbin told reporters during a news conference. “Some of these were in our control and some out of our control. I don’t want to relive that history. I think we’re pushing forward.”

Monday set the stage for the tough questioning that Jackson will face from Republicans starting Tuesday. GOP Sen. Thom Tillis of North Carolina, notably, complimented Jackson on her “temperament” as she listened to the senators’ remarks on Monday.

Three Republicans – Graham, Susan Collins of Maine, and Lisa Murkowski of Alaska – voted for Jackson’s confirmation to her current seat on the DC circuit court. The stakes for a Supreme Court nominee are considerably higher. Graham, who had favored another rumored contender for the nomination, federal district judge J. Michelle Childs, has already expressed his opposition to Jackson.

No Republicans on Monday signaled a willingness to throw their support behind Jackson. Democrats can confirm Jackson through a simple majority without any GOP votes, but the party’s top leaders have said they are seeking bipartisan confirmation.