Republicans in Georgia have defied former US president Donald Trump to vote overwhelmingly for Brian Kemp as their candidate for governor.

Kemp was declared the winner on Tuesday night after taking a sizeable lead over his main rival, David Perdue. The result is a bloody nose for Trump, who campaigned heavily for Perdue and vilified Kemp for certifying Joe Biden’s election victory in Georgia in 2020, calling the governor a “turncoat” and a “coward”.

Kemp will face Stacey Abrams, the Democratic candidate whom he narrowly beat in 2018, in November’s midterm election.

The result added to a mixed set of primaries for the former president, who continues to suggest he will run again for president in 2024. Some of the candidates he has endorsed have chalked up notable victories, such as JD Vance in Ohio and Doug Mastriano in Pennsylvania.

But others have fallen short, such as Madison Cawthorn in North Carolina. Mehmet Oz, the daytime television star who Trump backed for senator in Pennsylvania, is heading for a recount in his race against David McCormick, the former hedge fund boss.

Kemp spent Monday campaigning alongside Mike Pence, the former vice-president, to whom Trump has also attached blame for his 2020 election loss.

“I’m not mad at him, I think he’s just mad at me. That’s something I can’t control.”

Perdue conceded on Tuesday evening, saying: “Everything I said about Brian Kemp was true but here’s the other thing I said was true — he is a much better choice than Stacey Abrams, and so we are going to get behind our governor.”

A former US senator, Perdue had spent the last stage of the campaign engulfed in a dispute over remarks he made on Monday about Abrams.

“[She] said Georgia’s the worst place in the country to live,” he told supporters of Abrams, who is black and has lived in Georgia since she was a teenager. Perdue claimed Abrams was “demeaning her race” with comments she made in 2018 that people should not have to go into agriculture or hospitality to earn a living.

Trump’s failure in Georgia will be amplified if Brad Raffensperger wins his race to be the party’s candidate for Georgia’s secretary of state. Raffensperger resisted Trump’s attempts to overturn the state’s election result in 2020 and faced a primary challenge from Jody Hice, who the former president has backed.

With 90 per cent of votes counted, Raffensperger was 18 points ahead of Hice on 52 per cent of the vote. If he finishes with more than 50 per cent, he will avoid a run-off.

Raffensperger claimed victory late on Tuesday night. He did not mention Trump by name but made reference to the pressure the former president had applied to get him to change the 2020 result. “Not buckling under the pressure is what the people want,” he said.

But some of the former president’s favoured candidates prevailed, including Herschel Walker, a former American footballer and Trump ally, who easily clinched the Republican nomination for a US Senate seat from Georgia. He will face the incumbent, Democratic candidate Raphael Warnock, in the general election this fall. 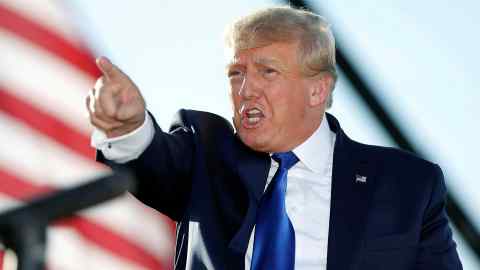 Trump’s backing also held sway in Texas, where Ken Paxton beat George P Bush, one of the youngest members of the US political dynasty, in the race to become the Republican nominee for state attorney-general.

Paxton has supported Trump’s false claims to have won the 2020 election, and secured the former president’s endorsement. That appears to have dispelled any doubts caused by the securities fraud charges that were brought against Bush seven years ago, and the more recent accusations of bribery while in office made by several of his deputies, all of which he has denied.

Texas Democrats were set for a longer wait to find out who their candidate will be for the state’s 28th congressional district. Henry Cuellar, the incumbent and the only anti-abortion Democrat in the House of Representatives, has faced a challenge from leftwing activist Jessica Cisneros.

After several hours of voting, Cisneros held the lead in their run-off, but with many Cuellar-supporting areas still to report most of their votes.