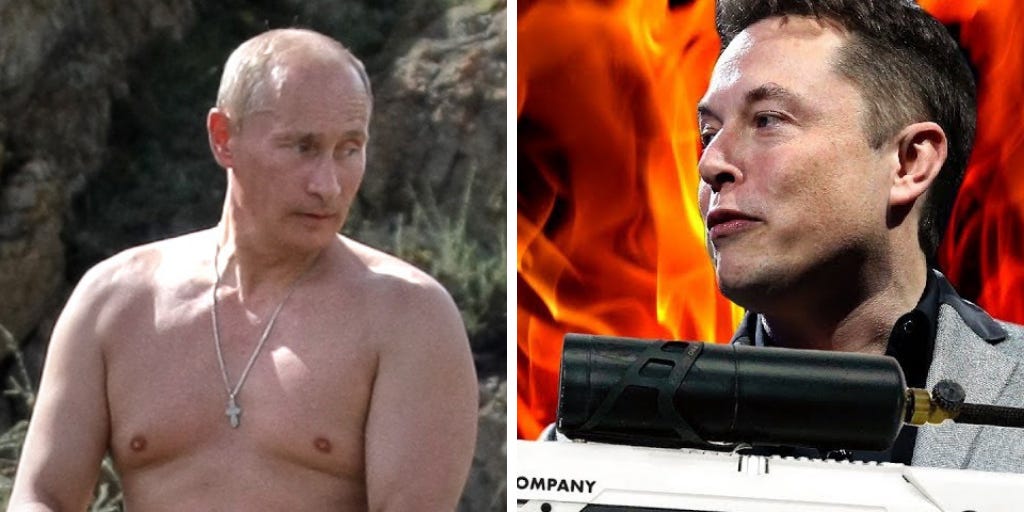 Tesla and SpaceX CEO Elon Musk is upping the ante on his proposed showdown with Russian leader Vladimir Putin over Ukraine, telling the Russian president he could “bring his bear” to the fight between the two.

Musk on Monday challenged Putin to “single combat,” with the stakes being “Ukraine.”

He was swiftly rebuked by Russian space chief Dmitry Rogozin, who posted a quote from Russian poet Alexander Pushkin, which read: “You, little devil, are still young, too weak to compete with me. It would only be a waste of time. Overtake my brother first.”

In response to Rogozin’s tweet, Musk appeared to sidestep the retort, posting a tweet on Tuesday that read: “I see you are a tough negotiator! Ok, you can have 10% more pay per view money.”

Musk’s Twitter retort to Rogozin included a composite image of a shirtless Putin riding a bear, next to what appeared to be an image of Musk with a Boring Company flamethrower, under the words “Choose your fighter.”

In another tweet on Tuesday, Musk continued: “He can even bring his bear.”

It is not clear if Putin owns a bear, but the Russian leader has debunked claims that he has ever ridden one.

Musk then suggested that he and Rogozin “form a book club,” tweeting a quote from Fyodor Dostoyevsky’s novel “The Idiot” at the Russian space chief.

After throwing down the challenge with Putin, Chechen warlord Ramzan Kadyrov mocked Musk. Kadyrov called Musk “Elona,” and claimed that Musk would get destroyed in the match-up with Putin.

Responding to Kadyrov, Musk doubled down on his challenge to fight the Russian leader. Musk tweeted late on Tuesday: “If he is afraid to fight, I will agree to use only my left hand, and I am not even left-handed,” signing off with the name “Elona.”

At press time, Musk also appeared to have changed his username on Twitter to “Elona Musk.”

Musk has not offered specific details about how or where a fight with Putin would take place.

In the meantime, Musk is helping Ukraine by sending shipments of SpaceX’s Starlink internet system to the country. The Starlink app topped the download charts in Ukraine amid fears that internet services would be disrupted by the Russian invasion.