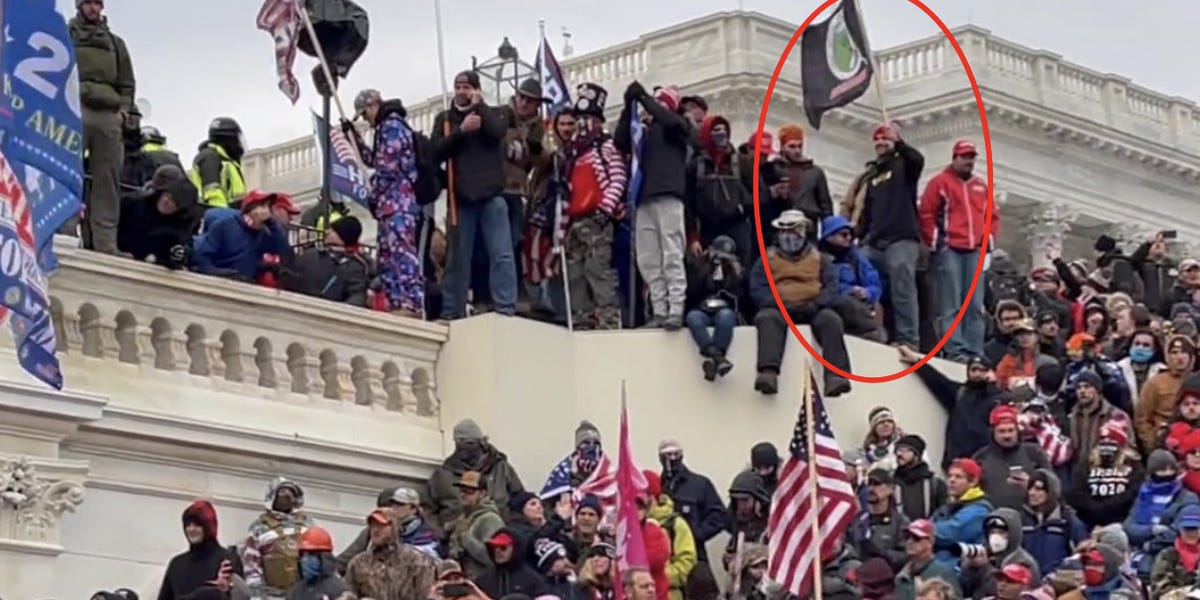 An ex-Army private who threw objects at law enforcement during the Capitol riot received a 44-month sentence after pleading guilty to a felony count of assaulting officers in November.

Nicholas Languerand, of Little River, South Carolina, was sentenced to more than three years behind bars following a ruling by US District Judge John Bates on Wednesday. Languerand, who has been jailed since his arrest in April 2021, will receive credit for time already served.

Prosecutors initially recommended a 51-month sentence for the defendant, but Bates offered a “modest reduction” in his final ruling, citing Languerand’s “extremely difficult and chaotic upbringing,” according to Reuters.

An attorney for Languerand told the court how Languerand’s father spent six months behind bars after blowing up the family trailer in an attempt to kill Languerand’s mother, WUSA reported. Languerand later lived with his father in a run-down home built from downed telephone poles, according to his legal team.

Languerand’s grandparents testified in court this week, describing how their grandson became enamored with the far-right QAnon conspiracy movement ahead of the Capitol riot. Languerand was administratively discharged from his role in the Army after a positive drug test, according to WUSA, and became “consumed” by the extremist movement after he was laid off from work.

Prosecutors say Languerand, who was living in Vermont in January 2021, traveled to Washington DC to attend former President Donald Trump’s “Stop the Steal” rally on January 6, 2021.

After the rally, Languerand made his way to the Upper West Terrace of the US Capitol where photos and video show him throwing a variety of dangerous items at law enforcement, including a large orange traffic barrier, an audio speaker, pieces of wood, and sticks, according to charging documents.

Photos also show him waving a “Pepe the Frog” flag atop the Upper West Terrace, according to charging docs. As Insider previously reported, political extremists in 2016 began associating the meme frog with white nationalism and far-right extremism.

Authorities say Languerand also took an officer’s riot shield, slammed it into the ground multiple times, and then pushed it back at police. According to court records, Languerand left the immediate area after law enforcement officers began using tear gas.

Prosecutors emphasized that, although Languerand did not enter the Capitol building on January 6, 2021, “it was not for a lack of trying.”

An anonymous witness contacted the FBI in February to say Languerand had posted an Instagram picture of himself at the Capitol during the insurrection, according to charging documents. Upon further review, investigators found several social media posts and comments made by Languerand discussing his role in the siege.

“No I never made it inside but I got some good shots in,” Languerand wrote on Instagram on January 6, 2021, according to charging documents. “A [sic] stole a riot shield got pepper sprayed gassed it was lit.”

When agents searched Languerand’s trailer and bedroom last spring, they found a stockpile of weapons, a makeshift human-like target full of bullet holes, and a notebook containing a “target list,” according to a sentencing memo.

On Wednesday, Languerand briefly addressed the courtroom to express remorse. “I have represented my community in an extremely poor way,” he said, according to WUSA.

Languerand’s 44-month sentence marks one of the longest sentences yet in a Capitol riot-related case. Two other men convicted of assaulting officers received 46 and 63 months in prison respectively.

An attorney for Languerand did not immediately respond to Insider’s request for comment.

More than 760 people have been arrested in connection with the attack and more than 170 have pleaded guilty.