Father, Son Who Stormed Capitol Together Both Plead Guilty to 1 Charge 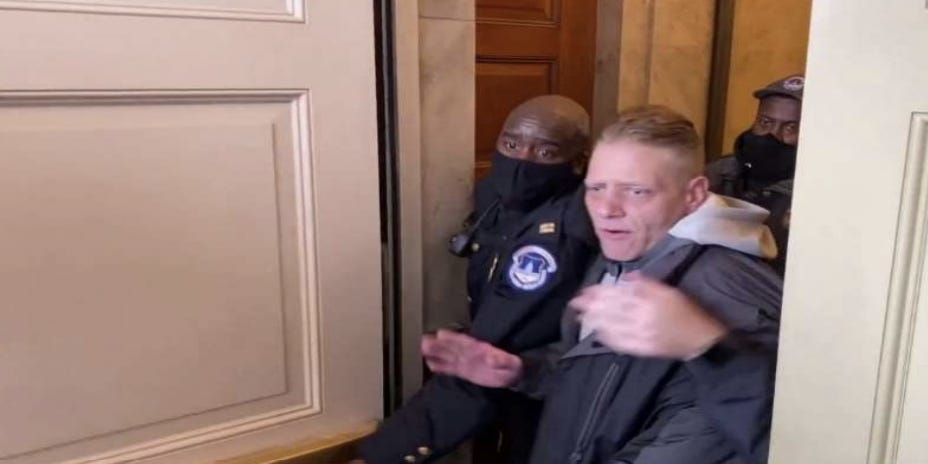 A father-and-son duo from New York state who stormed the Capitol together on January 6, 2021, both pleaded guilty to one misdemeanor charge on Wednesday.

William Michael Sywak, of Hamburg, New York, and William Jason Sywak, of Arcade, New York, appeared before Judge Rudolph Contreras to plead guilty to one count each of parading, demonstrating, or picketing in a Capitol building.

Both men initially faced four charges related to their role in the insurrection, including knowingly entering a restricted building and disorderly conduct. But as the government works to prosecute more than 760 people arrested in connection to the attack, federal prosecutors have offered several non-violent rioters the lesser parading charge in exchange for guilty pleas.

Investigators identified Michael Sywak, the father, in late January 2021, after a photo from the siege revealed a potential match with a booking photograph from a prior arrest, according to charging documents.

When the FBI interviewed Michael Sywak, he told agents that he and his son traveled to Washington, DC, to see the protests on January 6, 2021, but denied entering the Capitol building. Michael Sywak also told investigators that his son, Jason Sywak, did not go inside the Capitol either.

In a statement of offense reviewed by Insider, Jason Sywak acknowledged taking photos and videos while inside the Capitol, which he said he shared online before leaving.

Jason Sywak also admitted to texting an associate describing his experience at the riot after he returned home.

“Things I seen was aw[e]some people handing me pepper spray to get into the push,” he wrote.

He also described other rioters using chemical spray that “overpowered that police pepper spray,” according to the statement.

“The people will not give up an[d] that’s what we were showing them the capitol (sic) is the people house not the governments they work for us lol,” he wrote.

Father and son are set to be sentenced in June. Both are out on personal recognizance bonds in the meantime.

An attorney for Jason Sywak did not immediately respond to request for comment. Insider reached out to a number appearing to belong to Michael Sywak.