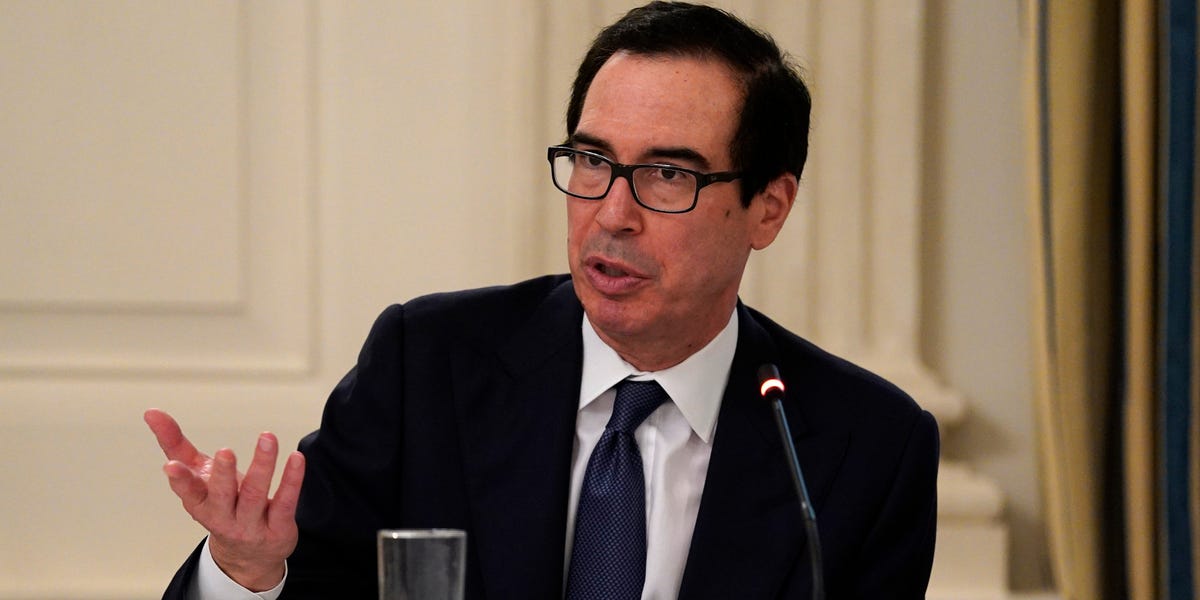 Treasury Secretary Steven Mnuchin said on Thursday that Republicans will seek to implement enhanced unemployment benefits so they cover 70% of a jobless person’s previous wages.

During an interview with CNBC’s “Squawkbox,” Mnuchin said the GOP want to put in place a federal payout that ensures people would have adequate incomes while they’re out of work.

“We want to make sure that the people that are out there that can’t find jobs do get a reasonable wage replacement,” Mnuchin said. “It will be based on approximately 70% wage replacement.”

President Donald Trump had suggested a similar wage replacement rate on Tuesday during his coronavirus press briefing, which would scale it back significantly from the $600 weekly boost that millions of unemployed people are receiving.

According to an estimate from Ernie Tedeschi, a former economist in the Treasury Department during the Obama administration, that rate would amount to a federal supplement of $175 to $200 per week, depending on how large unemployment payments are, as they vary widely from one state to another.

Tedeschi previously told Business Insider that reducing it to that level would prompt income drops ranging from 30% to 50% for jobless people.

Read more: A high-growth fund manager returning 7 times more than his peers tells us how he’s shifting from post-pandemic tech themes into ‘real companies’ — and shares 6 stock picks set to win the market’s next phase

The 70% wage replacement level also drew criticism from top Democrats. Sen. Ron Wyden of Oregon, the ranking Democrat on the Senate Finance Committee, said in a statement to Business Insider on Wednesday that amount wouldn’t be enough  for families to make ends meet.

“Slashing benefits to 70% of wages would cause families tremendous financial pain and the loss of about 3.4 million jobs,” Wyden said.

In March, Congress and Trump passed a $600 federal boost to state unemployment payouts to tide over people during a massive wave of job losses. Those benefits expire within three days for over 30 million Americans collecting unemployment.

Republicans fiercely oppose extending it, saying it disincentivizes people from seeking new work as many people can earn more from the government than their past jobs. However, unemployment stands at 11.1%, and economists project it will remain in the double digits for the year.

Meanwhile, Democrats favor extending the $600 federal unemployment benefits through January of next year. It’s expected to be a major area of debate as stimulus negotiations with Republicans get underway with the pending release of their stimulus plan.