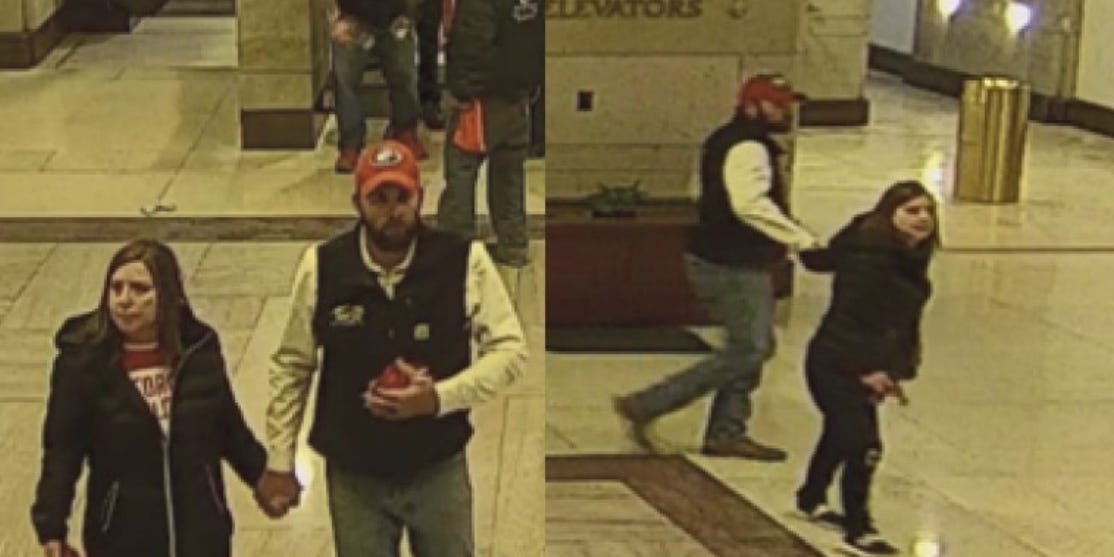 A married couple from Georgia was arrested and charged in connection to the January 6 Capitol Riot last week after a trove of Facebook posts, security footage, and anonymous tips led FBI agents to their door.

Charles Hand III and Mandy Robinson-Hand, of Butler, Georgia, are each charged with four counts connected with their alleged role in the insurrection, including entering and remaining in a restricted building, disorderly and disruptive conduct, and parading, demonstrating, or picketing in a Capitol building.

Their Friday arrests come more than 14 months after a mob of pro-Trump rioters stormed the Capitol in an attempt to stop the certification of the 2020 presidential election.

Prosecutors said the couple was captured on security footage throughout the US Capitol on January 6, identifiable by Charles Hand’s red University of Georgia baseball hat. The Hands also appeared in open source documentary footage from that day, according to court documents.

An anonymous witness who knows the couple from Georgia later identified the Hands in screenshots from surveillance footage inside the Capitol, prosecutors said.

Documentary footage from the scene reportedly shows Charles Hand breaking off a piece of metal fencing from outside the Capitol and putting in his back pocket around 1:00 pm. Security footage later caught the couple entering the building through a breached doorway at approximately 2:30 p.m. local, according to court records.

At one point, law enforcement officers appeared to be involved in a physical altercation inside the building, prosecutors said, citing security camera footage. Charles Hand appeared to try and make his way toward the conflict, but his wife restrained him, court documents show.

Following the insurrection, both Charles Hand and Mandy Robinson-Hand documented their experiences in multiple Facebook posts. Prosecutors said Charles Hand described witnessing “thousands upon thousands of angry Americans marching onto the Capitol to protest and stop the certification of what I personally believe to be an election stolen from the American people.”

Meanwhile, a tipster told investigators that Mandy Robinson-Hand wrote her own posts, in which she said, “We’re in the capital [sic]. Taking our house back,” and “We’ve been tear gassed etc.” Prosecutors said the posts have since been deleted.

The Atlanta Journal-Constitution on Tuesday reported that Mandy Robinson-Hand is a local Republican Party official, serving as the chairwoman of the Taylor County Republican Party.

Robinson-Hand did not immediately respond to Insider’s request for comment on her and her husband’s behalf.

More than 750 people have been arrested so far in connection with the attack, and more than 200 have pleaded guilty.