Giuliani Was Trump’s ‘Dirt-Digger’ and Used by Ukrainians 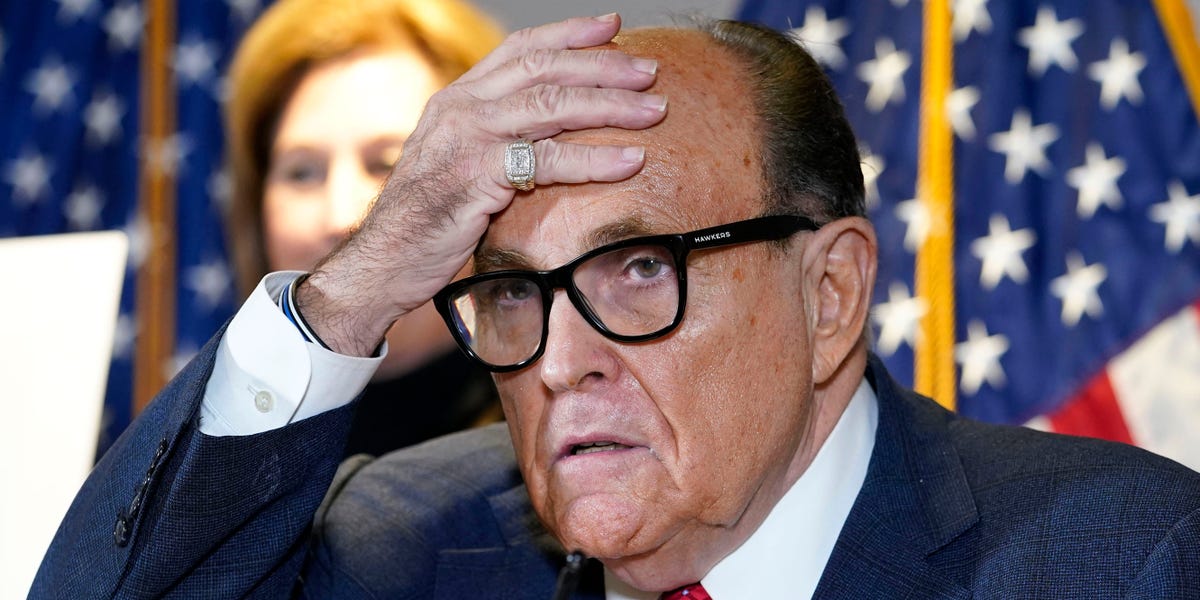 The former US ambassador to Ukraine said Rudy Giuliani was a “personal dirt-digger” for former President Donald Trump and worked with corrupt actors in Ukraine to bring about her unceremonious ouster in 2019.

Marie Yovanovitch testified about some of these details during Trump’s first impeachment inquiry, which focused on his efforts to pressure the Ukrainian president into publicly announcing investigations targeting the Bidens while withholding vital military aid and a White House meeting.

But Yovanovitch strikes a much more candid tone in her book, “Lessons From The Edge,” where she outlines how Ukraine’s corrupt former top prosecutor, Yuriy Lutsenko, used Giuliani as a tool to spread disinformation in the US ahead of the 2020 election and engineered her abrupt firing in the spring of 2019.

She says that Lutsenko was aware that Giuliani wanted to paint then-Democratic presidential candidate Joe Biden as corrupt and sought to “undermine” his candidacy in the 2020 election. So Lutsenko “had concocted a tale of lies and half-truths to oblige Giuliani,” Yovanovitch writes. “Lutsenko reshaped actions that Biden had taken to hold corrupt Ukrainians to account and twisted them into the opposite.”

She goes on to detail how Lutsenko falsely claimed that Biden had ordered the firing of a former Ukrainian prosecutor, Viktor Shokin, to stop him from investigating the Ukrainian energy company Burisma Holdings, whose board Biden’s son, Hunter, worked on. In fact, the opposite was true.

“Shokin was not actively investigating corruption at Burisma, or anyplace else for that matter, which was why the entire donor community had come to believe that Shokin was corrupt and needed to go,” the book says. “This Orwellian construct was just one of the many ludicrous elements of the Giuliani-Lutsenko conspiracy theory.”

Giuliani’s and Lutsenko’s other focus, the book says, was getting Yovanovitch fired from her post as Ukraine ambassador because both men had a vendetta against her — but for different reasons.

Giuliani believed, wrongly, that Yovanovitch was directly responsible for denying a US visa for Shokin, whom Giuliani wanted to meet with as part of his quest to dig up dirt on the Bidens ahead of the 2020 election. And Lutsenko was upset that Yovanovitch — along with other nonpartisan US officials — had described him as a corrupt prosecutor-general working to advance his own interests ahead of Ukraine’s.

Still, the former ambassador writes, she wasn’t worried because “while I’d seen plenty of whisper campaigns and smear efforts in my many years of working in the former Soviet Union, Americans had never been among the key players driving them.”

“Perhaps that’s because anyone considering such an effort would never have gotten close enough to the seat of American power to have an impact,” she adds. “But as I was rapidly learning, where Trump’s administration was concerned, all bets were off.”

Yovanovitch then writes that she wasn’t deterred from her work in Ukraine despite efforts by Giuliani and Lutsenko to undermine her. But she grew increasingly uneasy at the ripple effects their actions had in Washington, DC.

“I knew that Lutsenko was going to try to join forces with Giuliani and that they both wanted me fired,” the book says. “But I still couldn’t imagine that they were going to be successful. The notion that an unscrupulous, disgruntled foreign official or even a president’s personal dirt-digger could actually manipulate the US government to act against a sitting U.S. ambassador was inconceivable to me.”

But, as Yovanovitch later recounts, Giuliani and Lutsenko were successful in their efforts to smear her and she was abruptly fired from her ambassadorship.

As a foreign service officer, Yovanovitch kept a low profile. But she catapulted into headlines in 2019 when House Democrats launched Trump’s first impeachment regarding his efforts to strongarm Ukraine into doing his bidding while withholding security assistance and a White House meeting.

Yovanovitch’s testimony focused on her work in Ukraine and how political forces — both in the US and Ukraine — led to her unceremonious ouster before the end of her term.

She also described how “shocked and devastated” she felt when she learned the details of a July 2019 call between Trump and Ukraine’s president, Volodymyr Zelenskyy, in which Trump pressured Zelenskyy to investigate the Bidens, called Yovanovitch “bad news,” and said that she was “going to go through some things.”

While she testified, Trump lobbed attacks against Yovanovitch on Twitter in a move legal experts said amounted to witness intimidation.

Yovanovitch, when asked to respond to the attacks mid-testimony, said they were “very intimidating.”