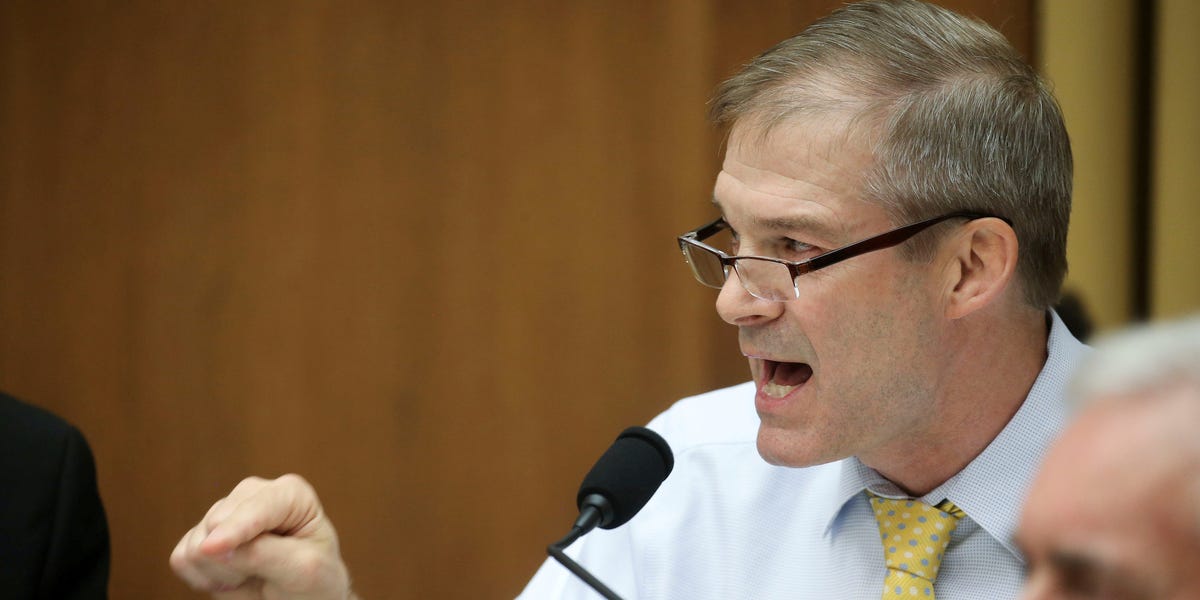 A House subcommittee held a widely anticipated hearing Wednesday whose stated purpose was to grill the world’s most powerful CEOs about whether tech companies have too much market control and violated antitrust laws.

One notable outburst came from Ohio congressman Jim Jordan, one of Trump’s most loyal attack dogs on Capitol Hill.

During the hearing, Jordan asked Alphabet CEO Sundar Pichai if he could “assure Americans” that Google wouldn’t use its features to give former Vice President Joe Biden, the 2020 Democratic presidential nominee, an edge over Trump in the general election.

Pichai testified that Google is “fully nonpartisan” and does not favor one candidate over another in elections.

After Jordan was done with his questioning, Democratic Rep. Mary Gay Scanlon of Pennsylvania was up and said, “I’d like to redirect your attention to antitrust law rather than fringe conspiracy theories.”

Jordan erupted at his colleague, saying, “We have the email,” presumably referring to an email that was leaked to Fox News in which Google’s former head of multicultural market expressed support for increasing Latinx voter turnout.

Other lawmakers in the hearing room subsequently began yelling at Jordan and telling him his time was up, while the subcommittee’s chairman, Rep. David Cicilline of Rhode Island, repeatedly banged his gavel to silence Jordan and restore order.

When Democratic Rep. Jamie Raskin shouted at Jordan to “put your mask on,” Jordan used the comment to pivot to another Republican conspiracy theory about the “unmasking” of former national security adviser Michael Flynn’s name in US intelligence reports following the 2016 election.

In another instance, Rep. Matt Gaetz of Florida used a significant portion of his questioning time to grill Pichai about Google’s search algorithm and suggest it was tailored to hurt conservatives.

“You’ve confessed that there is a manual component to the way in which you blacklist content,” Gaetz told Pichai. “It seems to be no coincidence that it’s sites like Gateway Pundit, The Western Journal, American Spectator, Daily Caller, and Breitbart, that receive the ire or the negative treatment.”

Many of the websites Gaetz mentioned have been known to promote far-right propaganda and conspiratorial content.

“The manual black list targets that Google specifically goes after are those who support President Trump, who hold a conservative viewpoint,” Gaetz said, adding that he believes Google is “engaging in election interference.”

“When you empower individuals, the same individuals that [the right-wing activist group] Project Veritas has exposed as labeling people as terrorists who say, ‘Make America great again,’ or support the president … that, in fact, could be the very election interference that we’re concerned about,” the congressman from Florida said.

At another point during Wednesday’s hearing, Gaetz’s Florida colleague Rep. Greg Steube suggested that YouTube, which is owned by Alphabet, took down a video promoting hydroxychloroquine as a cure for the coronavirus because it wanted to censor right-wing views.

“Yesterday I was sent a YouTube video about doctors discussing [hydroxychloroquine] and discussing the not-dangers of children returning to school,” Steube told Pichai. He added that YouTube has since taken the video down for violating its community guidelines, and he asked why that video was removed when other videos depicting violence are left up.

Pichai replied that when videos promoting cures for a disease are uploaded to YouTube, particularly during a pandemic, the website relies on “local health officials” and the Centers for Disease Control and Prevention (CDC) to review whether claims in the video are legitimate. If a video does not meet CDC guidelines, Pichai said, it gets taken down.

Many Republican lawmakers and the president have promoted hydroxychloroquine as a potential cure for the novel coronavirus, which causes a disease known as COVID-19. But the Food and Drug Administration has determined that the anti-malaria drug is not an effective coronavirus treatment.

The Florida lawmaker also said that many of his campaign emails are getting sent to users’ spam folders and implied that Gmail was intentionally working to undermine him.

Steube then turned to Facebook CEO Mark Zuckerberg and said, “I think at this point it’s fairly obvious that technology platforms have been stifling conservative news and opinions.”

Republican Rep. Jim Sensenbrenner of Wisconsin also grilled the CEOs, at one point asking Zuckerberg about Twitter’s decision this week to temporarily suspend Donald Trump Jr.’s account when he shared the Texas doctor’s video touting hydroxychloroquine as a coronavirus cure.

“I wouldn’t take it myself, but there’s still a debate about whether it’s effective in either treating or preventing COVID-19,” Sensenbrenner said.

“I think what you’re referring to happened on Twitter,” Zuckerberg replied, “so it’s hard for me to speak to that.”