Here are some prominent figures spotted at the Capitol siege 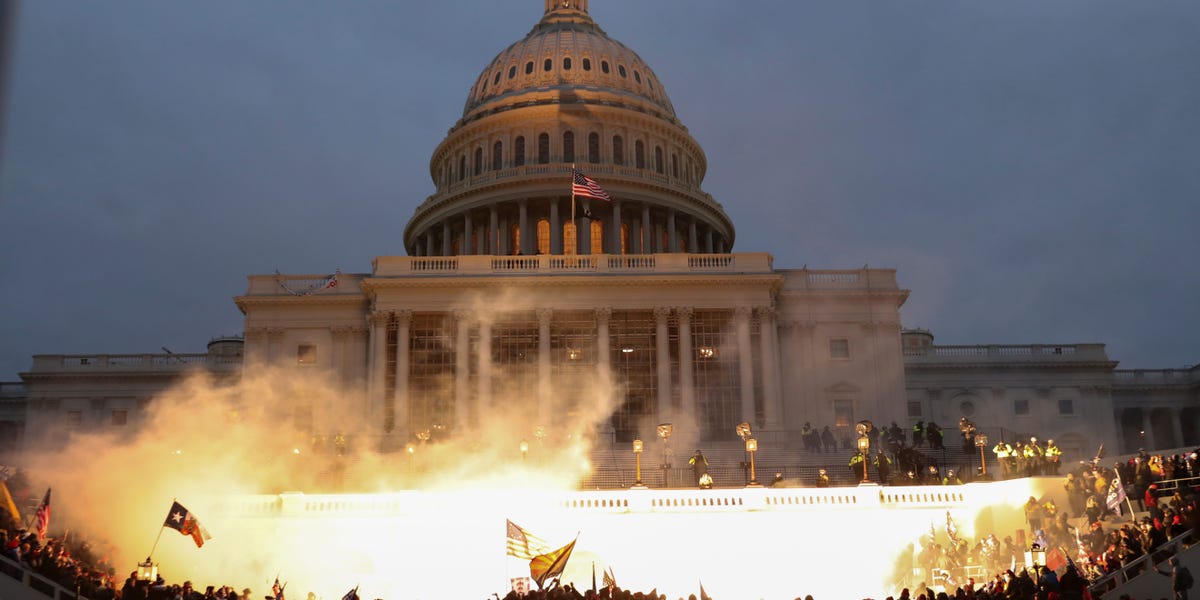 Wednesday’s March for Trump, a protest by Trump supporters against the election of Joe Biden, descended into an evening of unprecedented chaos as extremists stormed the Capitol building.

Four people — including a Capitol police officer— died during the attempted coup, that ended more than four hours after the breach when law enforcement regained control of the government building.

The event has been described by President-elect Biden, DC Mayor Muriel Bowser, and others as domestic terrorism.

The evening is among the most well-documented crimes in US history, and few Trump supporters made an effort to disguise their identify.

Here are some well-known political and cultural figures who were spotted among the crowds inside or outside the Capitol.

Derrick Evans, a newly elected member of West Virginia’s house of delegates, streamed a video as he stormed the Capitol buildingwith a crowd of Trump extremists.

In a five-minute clip of the video posted on Reddit, Evans chanted “Trump! Trump! Trump!” as the crowd forced open the doors to the Capitol. He flipped the camera round to show himself wearing a black motorcycle helmet.

Evans walked around shouting “We’re in baby!” and “Freedom!”

He is heard warning other rioters not to destroy property, and chants, “Our house!”

Hours after he posted and deleted the video, Evans posted on his Facebook page that he was on a bus headed back to West Virginia.

He claimed that he went to the Capitol as an “independent member of the media to film history.”

Roger Hanshaw, the Speaker of the West Virginia House of Delegates, told WV Metro News that “participating in a violent intentional disruption of one of our nation’s most fundamental political institutions is a crime that should be prosecuted to the fullest extent of the law.”

“He will need to answer to his constituents and colleagues regarding his involvement in what has occurred today,” Hanshaw said.

Britney Spears’ first ex-husband, a childhood friend who she married for 55 hours in 2004, attended the protest, Insider’s Kelly McLaughlin reported.

Jason Allen Alexander — who describes himself online as a “journalist researcher at Conspiracy Theories & History” — posted a selfie on Facebook from the event.

“DC. Millions showed up,” he captioned the photo.

It’s unclear if Alexander was one of the rioters who stormed the Capitol as lawmakers were counting Electoral College votes.

He did not immediately respond to Insider’s request for comment.

Spears married Alexander, who she grew up with in Kentwood, Louisiana, during a trip to Las Vegas in January 2004. Their marriage was annulled 55 hours later.

Jake Angeli, a leader in the QAnon conspiracy-theory movement, took photos from the Senate sais and marched through the Capitol with a megaphone, Insider’s Rachel Greenspan reported.

Angeli, who is known for wearing red, white, and blue face paint and a horned helmet, regularly attends far-right rallies in Arizona, The Arizona Republic reported.

QAnon has been responsible for the popularization of Trump’s voter-fraud conspiracy theories, and several other rioters were also scene in branded paraphernalia.

Angeli told Globe and Mail correspondent Adrian Morrow that police “politely asked him to leave” after they reportedly let him into the building.

During the livestream, Gionet talked to other rioters about what they were doing in the building and suggested he would sleep inside a lawmakers’ office and use the desk phone to call President Donald Trump.

At another point in the stream, a police officer inside the building appeared to be taking selfies with rioters

In an email to Insider, Gionet disputed being called a “white nationalist,” but he is characterized as such by the Southern Poverty Law Center,  Tenbarge reported.

Nich Ochs, who founded the Hawaii chapter of the Proud Boys, was arrested by the FBI in Honolulu on Thursday night after returning from Washington DC.

Ochs posted a selfie smoking a cigarette inside the Capitol building during the violent siege on Wednesday. He stood smiling next to another man who was wearing a hat and sunglasses.

Proud Boys, a largely pro-Trump group made up of chapters around the US and abroad, hosts members who do have racist, white supremacist, anti-Islam, and anti-Semitic views. The Southern Poverty Law Center, a nonprofit that tracks extremism, categorizes the Proud Boys as a hate group

Ochs rose to low-level infamy last year when he ran an unsuccessful bid for state legislature and received an endorsement from the Trump ally and convict Roger Stone.

He was arrested at Daniel K. Inouye International Airport on one count of unlawful entry into restricted buildings or grounds.

“We didn’t have to break in, I just walked in and filmed,” Ochs told CNN. “There were thousands of people in there —  they had no control of the situation. I didn’t get stopped or questioned.”