I Watched Meta’s ‘Surviving 9/11’ at SXSW and Found It Stomach Churning. 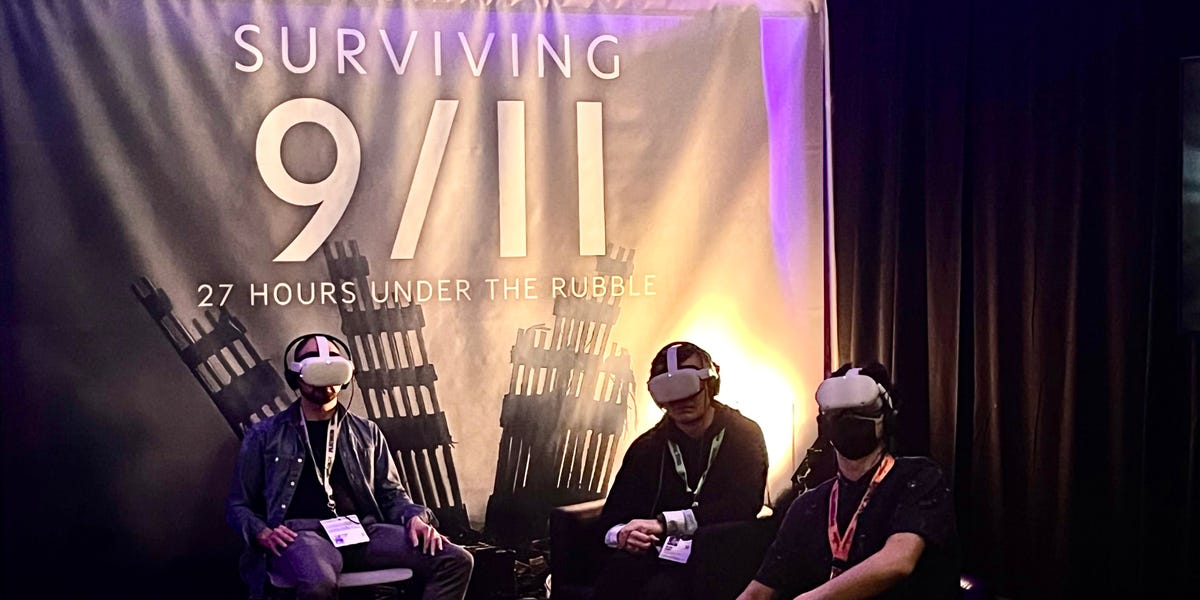 Twitter users have been up in arms after a blogger posted a picture of two people wearing Oculus virtual reality headsets at an exhibit called: “Surviving 9/11: 27 Hours Under the Rubble” at the South by Southwest tech conference.

The blogger, Dave Infante, has since deleted his original tweet but the outrage has continued, with people accusing Meta, the parent company of Facebook and Oculus, of profiting off 9/11, turning it into a video game.

After I saw the tweetstorm, I was curious to experience the exhibit. It was so popular, I had to endure an hour and a half waitlist to get in. Finally, I got a text telling me to “check back in at the Surviving 9/11 – 27 hours under the rubble booth to see if your spot is secured.”

When I arrived, a volunteer told me the experience was meant to be “hopeful” and handed me an Oculus headset.

Unlike much of the content on Oculus, Surviving 9/11 is not a video game but actually a somber 20-minute first-person documentary about Genelle Guzman-McMillan, a Trinidadian immigrant who was the last person to be rescued at Ground Zero.

I did not find the documentary tasteless, but my stomach churned watching scenes vividly recreating being high in the twin towers as the first plane hit, and seeing debris falling outside the window. The parts using archival footage of the World Trade Center Observation deck overlooking the New York skyline before 9/11 were also gut wrenching. As was the whole experience of Guzman-McMillan being trapped under the rubble for 27 hours.

TV networks mostly refrained from showing the planes flying into the World Trade Center after the attack, but that is one of the first things you see in the documentary.

Because Oculus is such an immersive experience, the realism here is hard to take. It actually felt like I was walking around the World Trade Center on a beautiful New York day. And it was all the more jarring because I was upstairs from some loud parties and music at the conference.

After I took off my headset, I asked the documentary’s producer, Victor Agulhon, if he was surprised by the controversy and he said he was not.

“It think it’s mostly a misconception about what VR is,” he said, explaining that it’s not just for video games, but also “a storytelling platform.”

As for the criticisms leveled at this documentary specifically, he said, “9/11 is obviously a very sensitive topic,” explaining, “It’s one of these experiences where if you haven’t seen it, you don’t understand.”

But I do wonder if the fact that he and the other filmmakers are not American — they are French — meant they didn’t fully grasp just how sensitive 9/11 is in the American consciousness.

Although his team had worked hard to make a tasteful project, Agulhon also said, in retrospect, he wished the booth was designed differently, and didn’t show Meta’s logo right next to the image of the smoldering rubble.

Meta did not actually produce Surviving 9/11. It is just distributing it. Still, the company has been under scrutiny before for seeming to trivialize serious topics. In 2018, it received backlash after demonstrating a virtual reality shooting game at the Conservative Political Action Conference (CPAC) right after the Parkland school shootings. The year before, Facebook CEO Mark Zuckerberg was heavily criticized for doing a VR tour of hurricane ravaged Puerto Rico.

On its website, Oculus says: “Thanks to VR, you can walk on the World Trade Center Plaza, reach the observatory deck, and admire the New York City skyline—all as they were before 9/11.”

I appreciate Agulhon wanting to stretch the limits of VR storytelling by demonstrating that it can be used for serious topics, but I’m conflicted. Just because VR has made it possible does not mean this is something that should be done.