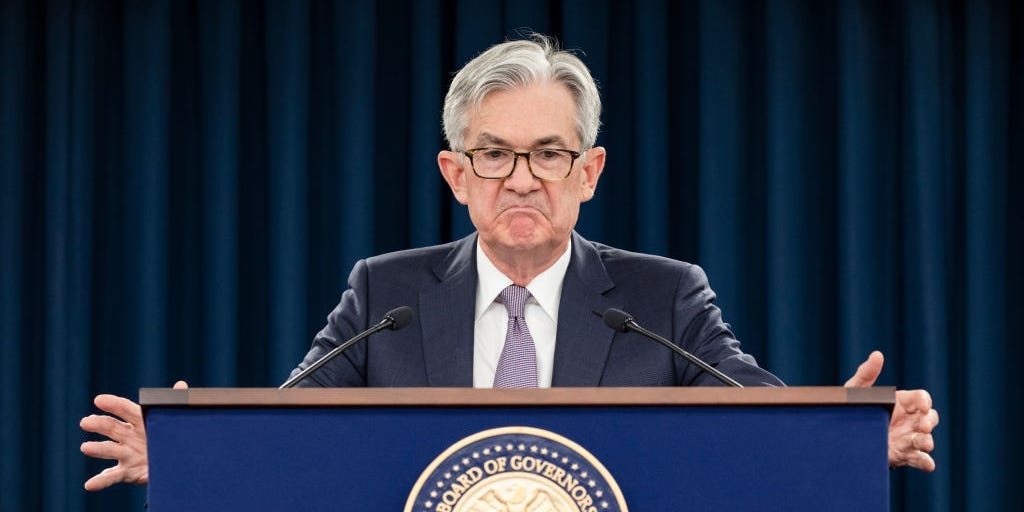 The odds of a recession are rising as the

The central bank is expected to raise interest rates by 25 basis points on Wednesday to clamp down on inflation, which rose 7.9% year-over-year in February, the fastest surge since 1982.

The near-certain rate hike comes at a precarious time. Economic sanctions and supply-chain disruptions stemming from Russia’s war against Ukraine have driven a surge in commodities, resulting in soaring food and energy prices around the world. Oil prices rose as high as $139 a barrel before falling below $100, though some investors are expecting crude to top out at $200 in the next few months.

The latest risk to the inflation outlook emerged in China where a surge in Omicron-related Covid-19 cases has led to a citywide lockdown and shutdown of factories in the tech hub Shenzhen.

Markets have swung wildly between gains and losses, but stocks are broadly shrouded by bearish sentiment. About $12 trillion in market value has been erased from global equities in 2022, according to Bloomberg.

The yield curve that measures the spread between the yields of 10- and two-year Treasuries fell to 22 basis points on Monday, its flattest level since March 2020. A further decline in the spread below zero would cause a yield-curve inversion, which often signals a recession in one to two years.

“Historically, whenever you have the combination of an oil shock and the Fed raising rates in that environment, you often do end up in a

,” Bilal Hafeez, the CEO and head of research at Macro Hive, said in an interview. “I kind of agree with the yield curve in that there’s a high chance of a recession, which then means equity markets will remain under pressure.”

Hafeez, whose model converts the yield curve into a probability of recession, said his model is estimating a 45% chance of a recession compared to the 18% probability at the start of the year. Strategists at Goldman Sachs said in a Friday note that the current S&P 500 index level of 4,260 suggests an approximately 40% likelihood of a downside recessionary case.

The outlook for a recession is clouded by the uncertainties around the outcome of the war in Ukraine, including whether it could escalate into a global war.

In the near term, it is the pace and strength of the Fed’s rate hikes that weigh on markets the most.

“I think the biggest risk to the market is the Fed raising rates because we’ve had such a long period where rates were low,” Hafeez said. “Whenever the Fed raises rates, all sorts of problems could come out.”

Currently, the market is pricing in as many as seven rate hikes, while Wall Street strategists have predicted up to 11 interest rate increases. But as the war slows global economic growth while fueling inflation, hiking too aggressively could also tip the economy into a recession.

“Everything the Fed does today will affect the markets and the economy six months from now. The problem the Fed has is that they have to take their foot off the brakes before it’s all clear,” Rhys Williams, the chief strategist at Spouting Rock Asset Management, said in an interview. “But the good news is that the economy is very strong going into this, so I think at least for the first couple of rate increases, we don’t have to worry about mistakes.”

How to weather the bear market and recession risks

Faced with the prospect of rising rates, Hafeez, whose 20-year-plus career spans JPMorgan, Deutsche Bank, and Nomura, has turned “neutral or bearish” on stocks.

“My view on stocks overall is to remain very defensive,” he said, adding that sectors like energy and utility could do well despite the overall downward pressure on equities.

In his view, investors are better off holding cash right now because both bonds and stocks are selling off. Indeed, global investors are allocating to cash by the most in nearly two years as they prepare for a

in 2022, according to Bank of America’s fund manager survey.

“Even though the yield on cash is close to zero, at least you don’t lose your money. The issue with putting your money in bonds and equities is that there’s scope for losses in a year like this,” Hafeez said. “It also gives you optionality because if you have cash, it’s very easy for you to come in and buy stocks and bonds at lower levels.”

He adds that the time to buy normally aligns with when people start to panic about recessions. While growth fears are on the rise, there has not been a consensus about the advent of a recession. Meanwhile, investors can wait for a few months to act on signs including the inversion of the yield curve, commodities price decline, and less hawkish signals from the Fed.

Spouting Rock Asset Management’s Williams is more positive on markets given the strength of the US economy and his belief that many of the macro concerns are priced in.

“It is quite possible that we are going to avoid recession because the strength of the economy is so good coming into this period,” he said. “If we avoid recession, this correction may be close to being over and this will prove to be a good buying opportunity.”

To generate income and hedge against inflation, he likes stocks with high dividend yields, energy stocks, and big tech stocks.

Although rising interest rates tend to negatively affect tech stocks by raising their cost of capital, big tech stocks act more like “the consumer staples of the 21st century” based on their pricing power and revenue growth, in his view.

“These are companies that you sort of can’t live without so they don’t need a tremendously strong economic background to produce good earnings,” he said.