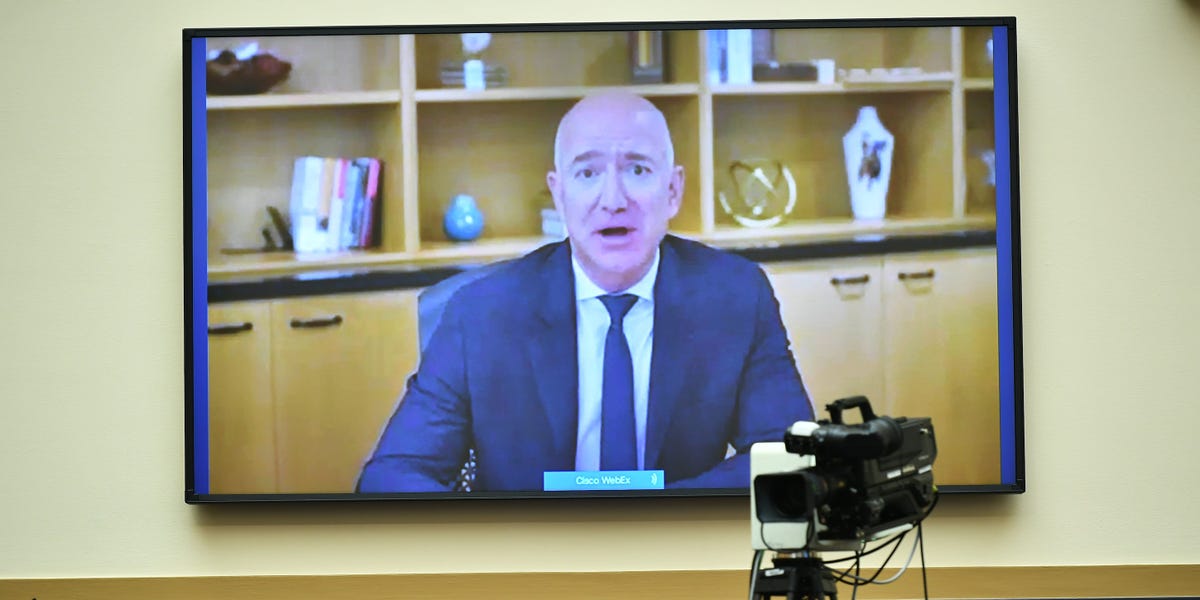 Americans got a rare chance to take the measure of the world’s richest person on Wednesday, when Jeff Bezos, the press-shy CEO of Amazon, testified before Congress for the first time.

But far from making an indelible impression, Bezos stood out mainly for what he didn’t do, sidestepping sensitive questions about Amazon’s market power and business practices, and behaving with the calculated caution of someone hoping not to be noticed in a crowd.

During the House Antitrust Subcommittee hearing that also featured the top execs of Facebook, Apple, and Google, Bezos mostly stuck to party-line comments, rarely giving definitive answers, and instead offering to get back with more details at a later date. By one count, tracked by the Markup news site, Bezos had the most “I’ll-get-back-to-you-on-that” comments of the four CEOs at the hearing.

At one point, Bezos struggled to answer a basic question about requiring seller names and addresses when opening an account on its marketplace, saying he’d get back because he’d “rather give the accurate answer.” Amazon does verify seller name, address, and phone numbers, a company spokesperson later told Business Insider.

The cautious demeanor underscores the heavy scrutiny Bezos, the world’s richest person, is facing as lawmakers debate whether Amazon, along with other tech giants including Apple, Alphabet, and Facebook, need to be broken up in an effort to foster fair competition. While it may make Bezos look evasive, and almost detached from the company, it’s the right approach when you’re testifying under oath, according to Bill Kovacic, former chairman of the Federal Trade Commission who now teaches antitrust law at George Washington University.

“He was trying to be very careful — it’s a natural consequence of being sworn in,” Kovacic told Business Insider. “Rule number one is never guess or speculate.”

Bezos, one of the most feared competitors in the business world, has earned a reputation as someone with the courage to fight for their beliefs — as was the case in 2019, when he publicly declared that he would not cooperate with a tabloid that had obtained sensitive selfies and text messages about his extra-marital relationship.

But the Bezos that appeared before lawmakers on Wednesday showed no signs of spoiling for a fight. When Florida Republican Matt Gaetz attacked Amazon for working with the Southern Poverty Law Center — a renowned, 50-year old nonprofit that monitors extremist and hate groups — because in Gaetz’s word the group is hostile to “Christian doctrine” and “out of step,” Bezos demurred.

“I’m going to acknowledge this is an imperfect system,” Bezos said, of Amazon’s program allowing consumers to donate to charities that include the SPLC.

And when it came to important questions about the company, some legal experts said Bezos should have been a lot more forthcoming.

That includes his response to a question about Amazon looking into individual seller data to clone best-selling products. The question follows a Wall Street Journal report alleging that Amazon employees accessed proprietary data about third-party merchant on its platform in order to come up with its own competing product that eventually stole market share from the original seller.

Bezos said it’s against company policy to access proprietary seller data, and the company has additional safeguards to prevent it from happening. But he said he couldn’t guarantee that policy “has never been violated,” adding that the company is still investigating the case.

“I do not want to go beyond what I know right now,” Bezos said.

John Kirkwood, a law professor at Seattle University, told Business Insider that it was “disappointing” to see Bezos dodge the question because it was the issue of greatest importance during the hearing. Given tbat the story came out in late April, Amazon had plenty of time to come up with a better answer, he said.

Instead, Bezos could have used it as an opportunity to tackle the antitrust issue more directly, explaining why it’s pro-competitive to use publicly available information to copy or improve others’ products. He could have also explained in more detail about Amazon’s policy of prohibiting the use of confidential data about individual sellers, he said.

“You’d think on such a key issue they could move faster,” Kirkwood said.

Part of the reason why Bezos failed to appear more engaged may have had to do with the format of the hearing. Due to COVID-19, the testimony took place virtually, with each of the CEOs speaking through online video conferencing software.

Because each speaker was given a five minute limit to ask questions, some of the conversations seemed rushed and disorganized, according to Juozas Kaziukenas, CEO of Marketplace Pulse. He said it would have been more effective if the committee had questioned each CEO on separate days, as the questioning seemed to lack depth.

“It didn’t seem to present any new angles or uncovered evidence,” he said.

On less sensitive issues, Bezos didn’t appear to hold back.

Rep. David Cicilline, who chaired Wednesday’s hearing, shared a story about a seller who compared Amazon to heroin for its addictive nature — because it’s so big, it’s the only place to sell online and merchants keep coming back, even if Amazon may engage in abusive tactics, like copying their products or undercutting them.

Bezos also disputed the idea of Amazon being the only viable online marketplace for sellers. When asked about its growing market size, including Amazon’s roughly 40% share in US e-commerce, Bezos said he doesn’t think e-commerce should be considered a separate category from the broader retail market (under that premise, Amazon owns just 4% of total retail).

“I think we’re the best one,” Bezos said. “But we’re not the only option [for small sellers].”

On one occasion, Bezos appeared to take a jab at Facebook. When each of the CEOs were asked to share their thoughts on social media, Bezos said he viewed it as a “nuance-destruction machine,” without further elaborating.

Amazon’s biggest critics, however, took Wednesday’s hearing as an opportunity to pounce on Bezos. Athena Coalition, a nonprofit organization that previously organized worker walkouts for Amazon employees, said Bezos largely gave “non-answers” during the hearing, often appearing to lack “the will or competence to change Amazon through his own leadership.”

“During today’s hearing, Jeff Bezos seemed to be unaware of the widespread harms that Amazon inflicts, including the company’s mistreatment of sellers, raising the question: has Amazon grown too big to be managed?” Dania Rajendra, a director at Athena, said in a statement.