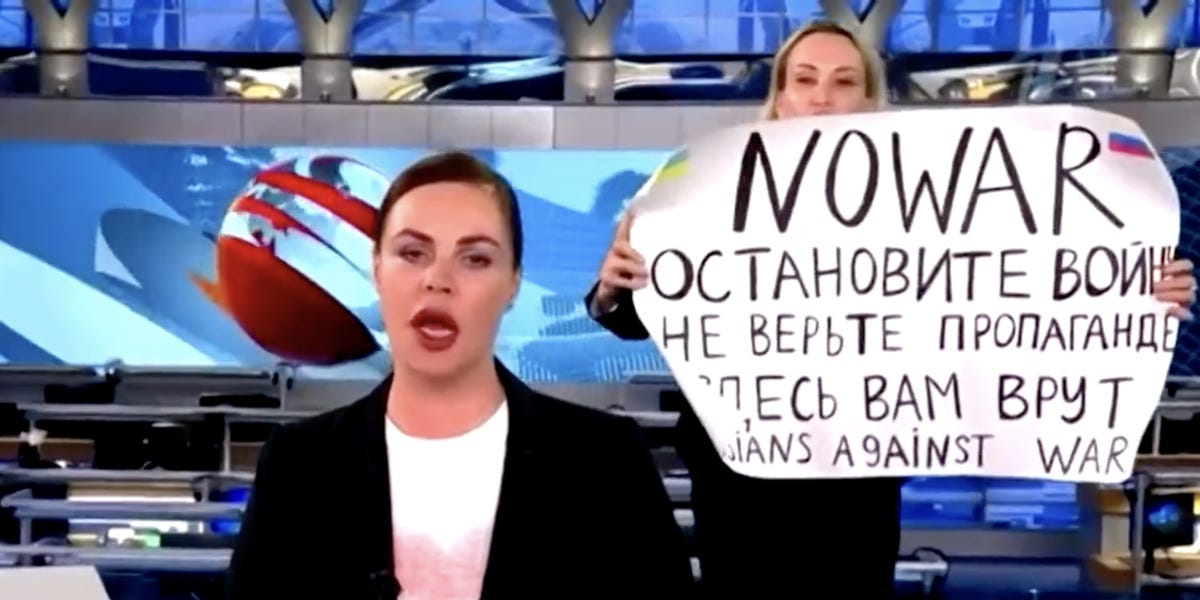 A Russian journalist who charged onto a state TV broadcast to protest the war in Ukraine told CNN that she did so because she found it “impossible to stay silent.”

Maria Ovsyannikova, an editor at Russian state broadcaster Channel One, ran onto the set and interrupted the network’s broadcast on Monday, holding a sign telling viewers that they were being lied to.

Speaking to CNN’s Christiane Amanpour on Wednesday, the editor said she decided “spontaneously” to launch a protest, but the notion had been “brewing” for a while.

“I have been feeling a cognitive dissonance, more and more, between my beliefs and what we say on air,” Ovsyannikova said.

“It was a brewing sense of dissatisfaction that kept increasing every year. And the war was the point of no return when it was simply impossible to stay silent,” she continued. “And I realized we would have to do something, or we will reach a point of no return, and it will be more and more difficult to do anything.”

She told CNN that her protest inspired some colleagues to resign from their posts after feeling a similar “disconnect” from reality.

Ovsyannikova said that she was handed an administrative sentence and that there was an ongoing criminal investigation into her on-air protest.

Despite becoming the face of protest in Russia, Ovsyannikova said her family held divided opinions on the Russian invasion of Ukraine. She told CNN her elderly mother had been “brainwashed” by Russian propaganda.

“She keeps repeating the phrases she hears on TV, the phrases that our propagandists created,” Ovsyannikova said of her mother.

Russian leader Vladimir Putin has baselessly attempted to justify his invasion of Ukraine as a mission to “de-nazify” the country.

Ovsyannikova has been fined $273 but has not been charged yet for the on-air demonstration. She was released after a 14-hour interrogation.

“I don’t feel scared, but at the moment, of course, I feel a huge burden of responsibility, and I realize that my life has changed irreparably. I don’t think there’s some kind of sad fate in store for me for the demonstration on air, but I am hoping I won’t face criminal charges,” she told Amanpour.

The journalist’s protests could land her in prison for up to 15 years, according to Russia’s wartime censorship law, reported The New York Times. Members of the media are prohibited from calling the invasion a “war,” per The Times.