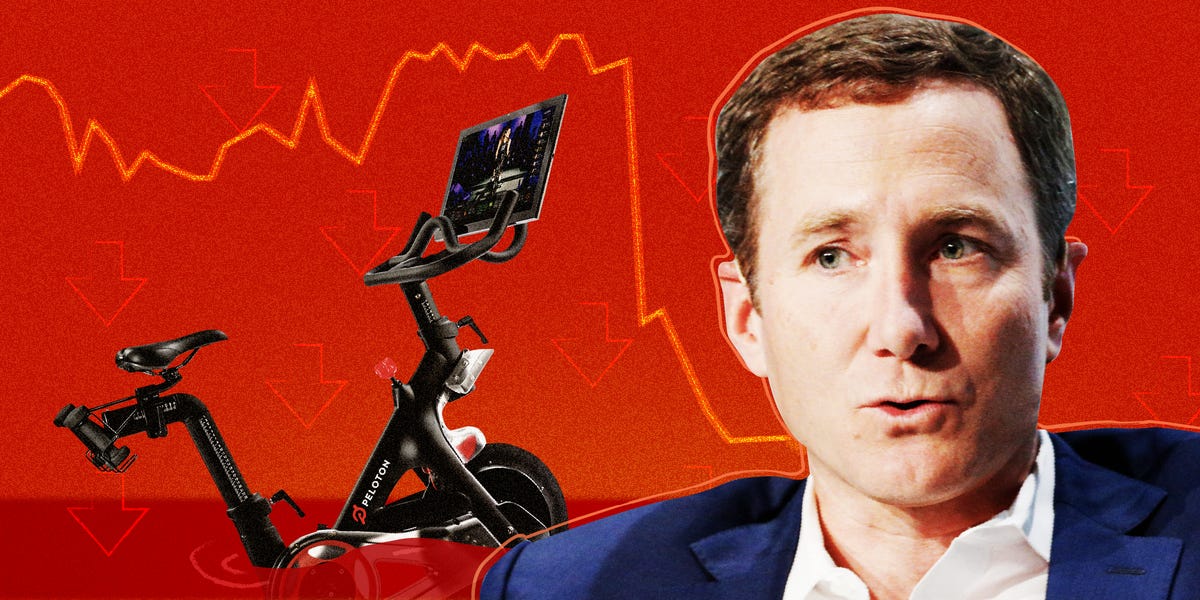 A year ago, Peloton was scrambling to supply the overwhelming demand for its sleek stationary bikes, which had become a pandemic status symbol. Today, the company has too many bikes and not enough people to buy them.

That striking reversal is emblematic of Peloton’s fall from hot pandemic stock pick to punchline. The stock soared 440% in 2020, hitting a high of $166 as the world adjusted to lockdowns and those with $1,500 to drop on an exercise bike looked for a safe way to get their fitness fix.

But as vaccine shots went into arms, Peloton’s stock started to sag, sinking 76% in 2021.

The bad news hit like a HIIT and hills class. There was the public recall of its Tread+ treadmill after reports that it had caused injuries and, in one instance, the death of a child. In November, Peloton slashed its outlook for the fiscal year amid slowing demand, lowering projections for subscribers and profit margins. Its stock fell in November by 53%.

What could have been an injection of energy, a prime product placement in the first episode of a Sex and the City reboot, instead featured a key character suffering a heart attack after a workout.

CEO and founder John Foley admitted in an all-hands meeting the pandemic boom had made the company “undisciplined”. Black employees hammered execs with questions about what they saw as systemic unequal pay. An internal hiring freeze hung over the entire company.

Then 2022 kicked off. January has been dominated by news of price hikes, layoffs, and a possible halt in production. The stock dropped 24% on Thursday alone. “Felt something squeezed in my heart,” one employee said in an internal chat in response to the stock drop.

Peloton responded by releasing its earnings two weeks early, and Foley, who had largely remained quiet, published a companywide memo.

He dismissed reports that Peloton is planning to halt production of new bikes and treadmills, framing it instead as “right-sizing our production.” He also addressed layoffs, confirming reports that a reduction in Peloton’s workforce is likely.

“In the past, we’ve said layoffs would be the absolute last lever we would ever hope to pull.” Foley wrote. “However, we now need to evaluate our organization structure and size of our team.”

The following is an account, gathered from previous reporting by Insider and other outlets, of how Peloton’s month of nonstop bad news played out.

In mid-January, Peloton execs were trying to spin up a subtle way to raise prices.

During an internal conference call on January 11, Peloton executives talked through doing away with free delivery and set-up fees, bumping prices on its $1,495 bike by $250 and its $2,495 treadmill by $350.

The changes were part of “Project Phoenix,” a plan to boost revenue across the company, according to a source familiar with the matter.

“It’s part of a broader move within the organization,” a speaker identified as chief commercial officer Kevin Cornils said on the call. “We’re looking to get gross margin between 25 and 30% on our products.”

Peloton was getting a scant 12% gross margins on fitness products like the Bike and Tread in 2021, according to its first-quarter earnings report.

“We were operating at a low general margin on Bike and a negative gross margin on Tread,” Cornils said. “The reality is the business itself is not a healthy business without some of those increases.”

In August, not long before the price hike, Peloton had slashed the cost of its flagship bike by $400. The discount, code-named “Lucky Dog,” was meant to bring in new riders and featured a significant media push. But now it was causing headaches.

As news of the price hikes was spreading, another conference call, this time from mid-December, was leaked to Insider and CNBC.

There, executives discussed cutting 41% of sales and marketing staff. Retail workers were also on the chopping block, according to comments made during the call, with 15 stores identified as “on the cut line.”

The e-commerce division was also named as a potential place to reduce headcount. One exec noted there had been a recent talent review in e-commerce and “we can make it pretty easy by just stripping out low performers.” The company has dubbed the cost-cutting initiative “Project Fuel,” and hired McKinsey to help.

In his memo to staff, CEO John Foley said recent reporting on the company was based on information that was “incomplete, out of context, and not reflective of Peloton’s strategy.” In relation to layoffs, he added the company is “still in the process of considering all options.”

But a former employee in product management who recently left the company told Insider layoffs have already begun.

“They’re basically doing layoffs without really calling them layoffs,” they said, adding that severance packages with NDAs attached were being handed out. The employee said marketing, research and development, and human resources departments were all being affected.

“Everyone’s trying to figure out the prioritization of who’s gonna be let go first and how they’re going to approach it,” another former employee who left in 2021 told Insider. “The overall lack of communication is really stressing folks out. I feel really bad.”

The two former employees requested anonymity in order to speak freely. Their identities are known to Insider.

In an internal Slack chat this week, one current employee wrote: “It seems clear that this company is going to go through a brutal downsizing and I think this is a pretty normal reaction given that A: there have been zero internal comms about this stuff, and B: our stock continues to tank, affecting everyone’s equity they have as ‘owners in this place. There’s a good chance some of us in this channel won’t be here in a few weeks (and I include myself in that reality).”

But the biggest hit to Peloton was a report by CNBC that Peloton planned to pause production on all its bikes and treadmills. The news triggered the second-biggest stock drop in the company’s history, ending Thursday down 24%.

In his memo, Foley dismissed the reports, writing: “Rumors that we are halting all production of bikes and Treads are false.”

Instead, Foley said the company is working to “right-size” its production and is now “evolving to meet seasonal demands” for “sustainable growth” after the unprecedented surge in orders spurred by the pandemic lockdowns.

In an internal presentation on January 10, Peloton outlined plans to pause production on all bikes and treadmills for at least six weeks, according to documents viewed by Insider.

It would pause production of the Bike for two months, beginning in February. It had already halted production on the more expensive Bike+ in December and would continue the pause until June. The Tread treadmill would pause for six weeks starting in February, while the Tread+ machine has been paused for all of fiscal year 2022 following a safety recall. And Peloton’s upcoming weightlifting product, Guide, would have a nine-month production pause from February to November.

It’s not clear if Peloton’s strategy changed between the presentation and Foley’s memo.

The former product management employee told Insider the company’s warehouses were stuffed with inventory with nowhere to go, due to an overly-rosy holiday forecast.

According to the former employee, during holiday rush in November and December, Peloton was putting around 10,000 bikes a day on container ships from Taiwan. But Peloton was only selling 4,000 to 5,000 bikes a day, the employee estimated, causing a glut.

“Peloton was looking at it like they needed to build up their inventory so they didn’t have a shortage like they did during COVID in 2020,” the employee told Insider. “Anybody with actual industry knowledge was like, ‘This is a bad, bad idea.'”

The employee described warehouses stuffed with bikes that were “a gigantic jigsaw puzzle, just moving things around to try and fit another bike in there.”

“Our warehouse was unsafely packed, really for months,” another former employee, who left in late 2021 and requested anonymity to speak freely, told Insider. “I guarantee it’s still completely packed to this day.”

What’s next for Peloton?

Analysts say Peloton faces an uphill ride as it adjusts to a post-pandemic world.

Jessica Ramirez, a retail research analyst at Jane Hali and Associates, said Peloton’s period of explosive growth was likely a one-time occurrence. “With anything that grows that quickly, it has to stop at some point,” she said.

membership costing $40, but it’s unlikely Peloton will ever sell hardware at the same pace it did early in the pandemic.

“If you were at all interested in Peloton, maybe you bought one during the pandemic,” said Ed Yruma, managing director at KeyBanc Capital Markets. “The question now is really incremental new users and how many of them are still there.”

One former employee summed it up by saying: “Ironically, the pandemic might turn out to be the worst thing to ever happen to Peloton.”