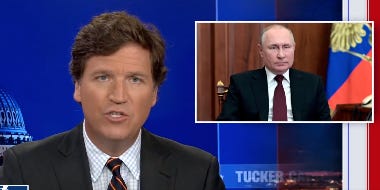 The Kremlin instructed Russian state media to feature Fox News host Tucker Carlson “as much as possible,” according to Mother Jones.

A leaked 12-page war memo, titled “For Media and Commentators,” told Russian media that it is “essential” to use more Carlson segments in their coverage because of his positions on the war in Ukraine, Mother Jones reported.

Carlson “sharply criticizes” the actions of the United States and NATO and their “negative role in unleashing the conflict in Ukraine,” the memo said, per the media outlet.

He is also critical of the “defiantly provocative behavior from the leadership of the Western countries and NATO towards the Russian Federation and towards President Putin, personally,” the memo continued.

The document was provided to Mother Jones by a Russian state media contributor who asked not to be identified. According to metadata reviewed by the media outlet, it was produced by a Russian government agency called the Department of Information and Telecommunications Support.

Mother Jones said that Carlson was the only Western journalist mentioned by name in the document.

Clips of Carlson are now commonplace on Russian TV, Newsweek reported, noting that he is portrayed as being pro-Russia and sympathetic to Russian President Vladimir Putin. In late February, his sympathetic coverage of Russia led to state TV re-broadcasting his show with Russian subtitles.

Insider’s Mia Jankowicz reported that Carlson, before the Russian invasion of Ukraine, echoed many of Putin’s talking points during a Fox News segment. In a now-infamous speech, he posed this question to viewers: “Why do Democrats want you to hate Putin?”

After the invasion, he changed his tune, saying that Putin is to blame. But, on Wednesday, Carlson embraced Russian disinformation, repeating a line put out by the Russian foreign ministry, The Washington Post reported.

Insider contacted Fox News for comment on Sunday afternoon but did not immediately receive a response.