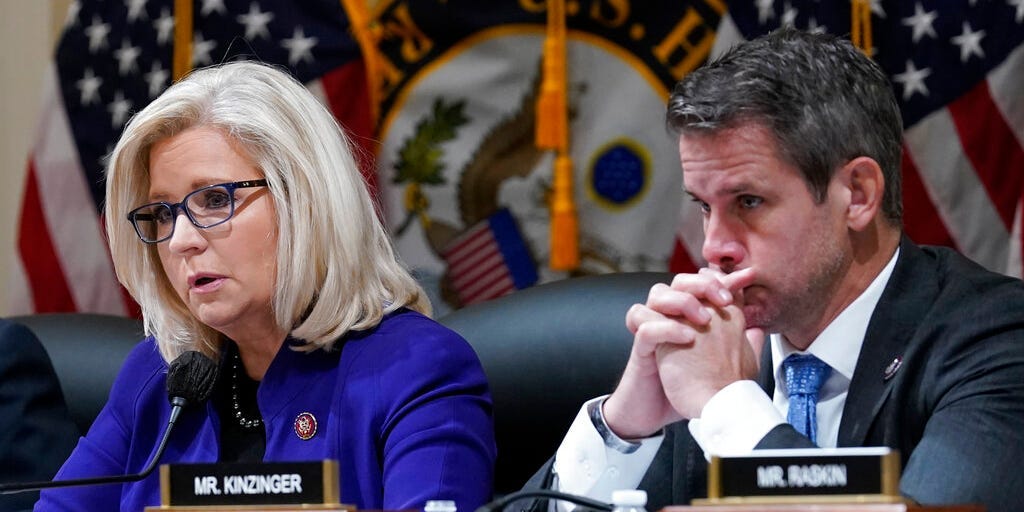 Rep. Liz Cheney skewered top Republicans after an RNC committee voted to advance a censure targeting her and Rep. Adam Kinzinger for serving on the panel investigating the January 6 attack.

According to Politico’s David Siders, members of the Republican National Committee’s resolutions committee unanimously voted Thursday to advance the resolution to censure Cheney and Kinzinger, who are the only two Republican lawmakers serving on the January 6 House select committee.

They were also two of the ten GOP members who voted to impeach former President Donald Trump following the insurrection.

“The leaders of the Republican Party have made themselves willing hostages to a man who admits he tried to overturn a presidential election and suggests he would pardon Jan. 6 defendants, some of whom have been charged with seditious conspiracy,” Cheney tweeted following the Thursday vote.

“I’m a constitutional conservative and I do not recognize those in my party who have abandoned the Constitution to embrace Donald Trump,” she added. “History will be their judge. I will never stop fighting for our constitutional republic. No matter what.”

In May 2021, Republicans voted to remove Cheney from her leadership position in the House, and the Wyoming Republican Party voted to no longer recognize her as a member of their party in November last year.

In September, Trump endorsed a GOP primary challenger against Cheney, but Rolling Stone reported that candidates backed by the former president are lagging behind their incumbent rivals in fundraising. Cheney has already broken her own fundraising records, raising more than $2 million in the final quarter of 2021 and bringing her total to $7.2 million, ABC News reported.

Kinzinger announced in October that he would not run for reelection in 2022.

Following Thursday’s vote, the Illinois lawmaker said he had “no regrets” about his decision to “uphold my oath of office and defnd the Constitution.”

“I will continue to focus my efforts on standing for truth and working to fight the political matrix that’s led us to where we find ourselves today,” Kinzinger tweeted.

The motion to censure heads next to the RNC’s Friday general session meeting, where the organization’s entire body is set to vote on the proposal during the party’s winter gathering in Salt Lake City. According to CBS News, the motion could be amended during the Friday session, but supporters expect it to pass.

Fox News reported that Thursday’s closed-door meeting included little discussion of the resolution itself, though the specific language used in the proposal was fiercely debated prior to the gathering.

According to CNN, a previous version of the resolution called for Cheney and Kinzinger to be expelled from the Republican Party’s conference, but the final version was “watered down” after some RNC members worried the effort to punish the lawmakers was too extreme.