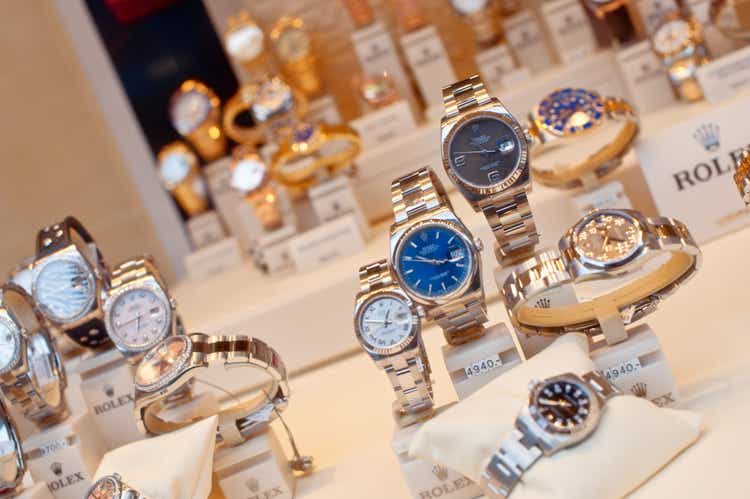 High-end watch prices continue to plummet, making for another possible bad sign for luxury retailers like LVMH (OTCPK:LVMHF), Richemont (OTCPK:CFRHF) and more that either directly sell flashy watches themselves or rely upon high-end consumers willing to splash out on statement-making jewelry.

The resale price of luxury watches – which some people buy as an investment – continued to wane over the past week from already lowered levels, according to WatchCharts.

WatchCharts reported that the average resale price of luxury watches fell to $18,206 on July 20, down more than 20% from the indicator’s March peak. The pullback has almost entirely wiped out big gains that high-end watch prices saw in the first quarter: Over the past three months, the average of Rolex prices fell 13.6%, while Patek Phillippes sank 16.4% and Audemars Piguet shed 11%. Popular models like the Rolex Daytona and Audemars Piguet Royal Oak have seen sale values drop about $10,000 and $20,000, respectively, in a matter of months.

Bloomberg recently pointed out a possible connection between luxury watches’ outsized declines and slumping crypto prices, as well as the implosion of multiple crypto exchanges.

However, the correlation hasn’t held since then, with watch prices sliding even more crypto’s recent rebound. Watch values fells even as Bitcoin (BTC-USD) rebounded about 20% from its recent lows.

Alternate explanations simply put forth that wealthier watch-collectors are merely “deeper into luxury territory”, as the New York Times suggests. If true, the declines in the previously most popular models would still stand to reason as fashion tastes dove into more obscure offerings and skewed the indices of the most popular models. Whatever the answer, the close correlation with crypto and prices and the resale the most well-known luxury watch resale prices appeared to deteriorate into the summer.

The Broad Luxury Category Is Rebounding

Additionally, the correlation of watch-resale prices to broader luxury-retail spending has appeared to grow more tenuous in recent months.

Even as watch prices fall, a recent Bank of America study found that overall European luxury spending rebounded 11% in May and June, reversing losses in the months prior. In fact, the bank cited luxury and beauty segments as the only two sectors within online retail that saw a reacceleration to start the summer.

Bank of America found similar results in America. “In the U.S., our tracker for online luxury goods accelerated on a year over year basis, turning positive,” BofA analysts wrote in their report.

The bank found U.S. luxury online retailers enjoyed an 8% year-over-year jump in sales during June compared to flat sales in May. An expected return of the tourist trade is also anticipated to help in-store sales for numerous retailers, particularly if China follows through on promises to allow international travel once again.

If this is to come to fruition, Statista forecasts that Chinese tourists will spend $41B on luxury items and support the overall luxury-retail industry to the same degree they had prior to the COVID-19 pandemic.