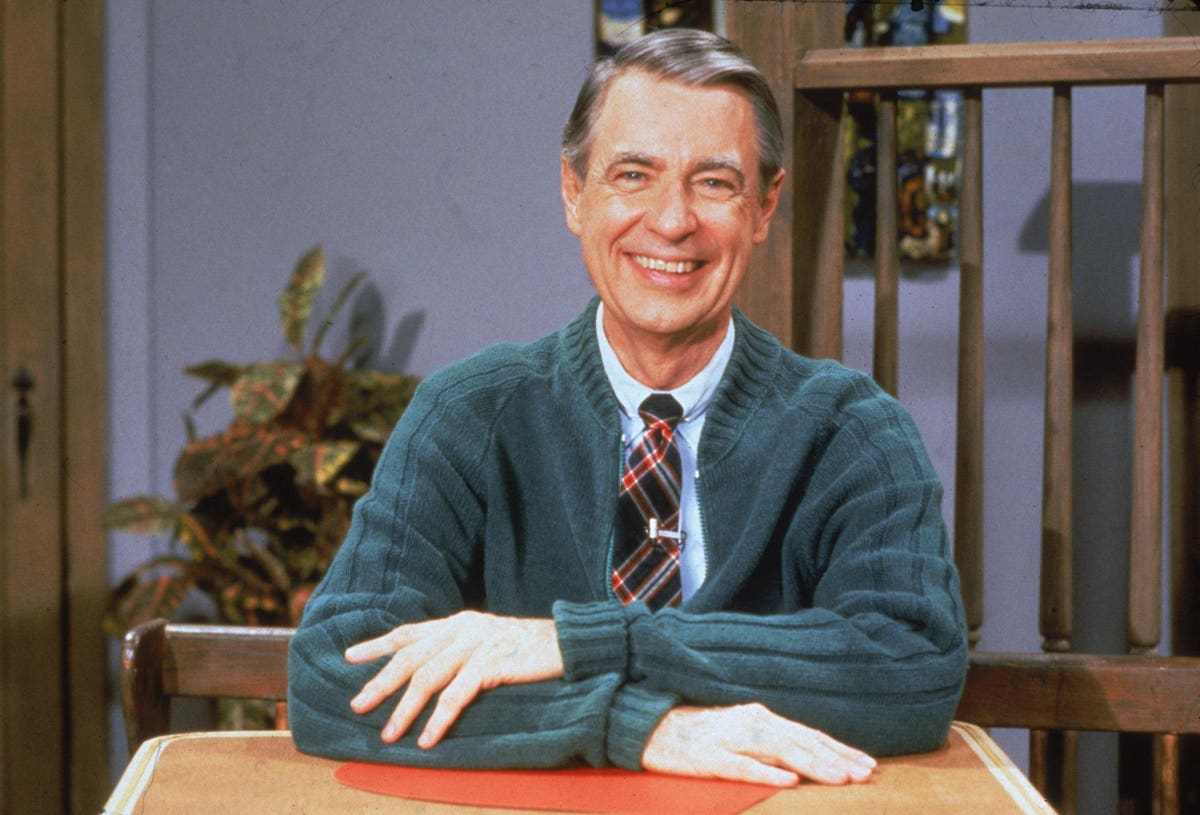 The Education industry is in a state of flux trying to meet the current needs of students while teachers, librarians, and administrators ponder their careers in the sector, long term.

A book about the present curated through filters of childhood’s past has readers wondering if they might have missed the signs an iconic character brought to life decades ago. Former teacher turned journalist, Ryan Rydzewski and his co-author Gregg Behr believe a journey back in time just might shed light on the path forward.

This reporter spent time with Rydzewski over two encounters to learn more about the book, When You Wonder, You’re Learning, a meticulous journey into the nature of Mister Rogers’ work, and the powerful messages that have forever altered Rydzewski’s and Behr’s mindsets. The following is an excerpt spanning these encounters.

Rod Berger: Take us back. Why this project? I would imagine, as a writer, many opportunities flash by you, or hit your desk. What were the reasons this topic of Mr. Rogers interested you and your co-author?

Ryan Rydzewski: I think it starts with the fact that both of us grew up in western Pennsylvania. Like Mr. Rogers himself, we were born here. We moved to different parts of the country for a while, and eventually, we found our respective ways home.

I’m a former educator and my co-author, Greg Behr has been leading the Grable Foundation for 16 years, a private family foundation that supports children and youth. With those backgrounds, we began translating findings from the learning sciences to understand more about learning itself. What are the conditions and methods most conducive to learning?

As we dug into the project, we realized our strong connection to Fred and a trend. When learning scientists talk about learning, they talk in very Fred-like ways. We expected a lot of pedagogical data, but instead, we found these brilliant education scientists were actually asking important questions. How do we make sure the children feel safe? How do we create an openness to learning? How do we make sure wherever children learn ‌they are loved and capable of loving? The scientists sounded like scriptwriters in Mister Rogers’ Neighborhood and that’s when we realized we had a book idea.

Berger: Was there ever a point in time where you and Greg realized the responsibility and emotions attached from a community perspective to writing about your neighbor, Mr. Rogers? There must be an entirely different layer of responsibility and pressure.

Rydzewski: That’s a fantastic question. It’s not one that we’ve ever gotten. There is a great story about the sentiment of the community. Tom Hanks was visiting Pittsburgh to shoot a Beautiful Day in the Neighborhood. He’s in this hotel elevator in downtown Pittsburgh, and a person walks in, a random guy on the street. Rather than being star-struck, he says something like, “We take Mr. Rogers really seriously around here, you better not screw it up.” It says a lot about the importance of Fr​​ed overall.

We both feel that weight of responsibility. When we first had the idea of the book, we called Fred’s wife, Joanne Rogers (who was still alive at the time) for her opinion and whether we were on the right track in writing something that she and Fred would be proud of. Her answer was a resounding, yes. Joanne was an amazing champion for our book. She wrote the foreword, and I think it’s one of the best parts of the book.

We also talked with Rogers’ colleagues, many of whom are still living in Pittsburgh. They are as Fred-like, as Fred himself. They are generous and selfless. They want to see that legacy stewarded in ways that are healthy, accurate, productive, and helpful to teachers and parents.

We both love Mr. Rogers and realize how much intention Fred put into every single scene, to make‌ sure that he was giving to kids. You can’t write about Fred without trying to do that yourself.

Berger: Let’s talk about the creative process, especially writing about someone you are passionate about and emotionally connected to, who also is an icon. How did you balance the reporter and writer in you?

Rydzewski: There were moments where the emotion of learning about Fred was almost overwhelming. It was almost paralyzing as a writer. How dare we even begin to convey the gravity of what this man meant to so many people, including the two of us?

There’s also the journalistic side. I have to fact-check everything. So does that mean I have to ruin the magic of Fred by finding out if this stuff really true? And in deconstructing what Fred was doing in the neighborhood, are we going to somehow lessen the magic? That was a real concern.

I admire the neighborhood now on so many more levels than I did as a kid. I appreciate Mr. Rogers. When you realize the level of work and the level of intention that went into every single scene of the neighborhood, down to what sweater Fred wore that ‌day, the syntax of a single line or song, and the choices he made about the design of the physical set, it’s incredible. Fred thought about the placement of things and how they would make children feel. You don’t want to lessen the magic. I’m even more in awe of Fred now than I was because he made it look so easy.

Berger: It always struck me that‌ to get down to the level of the child, Fred had to be intentional. Could you talk more about his intentionality?

Rydzewski: Episodes of Mister Rogers’ Neighborhood in his famous TV living room had blue walls but in the early years they were yellow. Taking in the science of creativity made Fred and his team change the color to incorporate the power of blue for kids. Fred dedicated a whole episode with just him and Mr. McFeely painting the walls.

He wanted to show the process of how things change. There are several scenes in that episode with Fred literally sitting and watching paint dry. It is Fred giving children space to just be quiet and something not seen on television very often. Once you realize that every choice Fred made was grounded in some scientific principle and the learning sciences – psychology, behavioral science, you ‌see it everywhere.

You realize when Fred did something that might look a little off to adults, he’s doing it for a very specific reason. He did that for 28 minutes, some 951 times, and that’s a lot of work.

Berger: I feel this book is incredibly timely in our country. It’s very optimistic in a time where there are many challenges facing everyone from parents to teachers to kids. Educators are battling many issues, and care deeply about what they do. They’re looking for inspiration outside of the four walls that they work in every day. In essence, who should read this book?

Rydzewski: It’s interesting. We released this book in the middle of the pandemic and as we’ve entered back out into the world, we’ve shared this book not only with parents and educators but with judges, healthcare professionals, and others. The word, “healing” was the overwhelming response.

It’s a testament to what Fred did that can be distilled into one sentence he said again and again, “I like you just the way you are.” It’s a healing message for everyone who has experienced difficulties and hardships, especially over the last two years.

Berger: Let’s put you in the elevator instead of Tom Hanks. What have you heard, that has been the most meaningful outside of that healing component that has changed you? What feedback have you received that you would have never anticipated?

It feels good that others are reading the book inspired to live up to the example that Fred left. I think the world needs more Fred’s. So if our book can play a small part in making that happen, then I think we will have done our job.

Berger: Could you share a little about how progressive Fred was? I feel it is something we should honor and celebrate as someone far ahead of his time.

Rydzewski: He was absolutely progressive in terms of who he was representing on public television. He spoke about it so plainly and in such an inviting way, that everybody came to love the world that Fred built. In many ways, it is much preferable to the world that we all live in.

He was very intentional about what kinds of images he was broadcasting in the neighborhood, and what ‌images and side publications ‌he put out there. For instance, Fred brought in Mayor Maggie, a black woman in the 1970s. He wanted to show kids a black woman in a position of power and other roles in publications so that kids could identify visually. In some ways, he created a blueprint for the new productions of today.

Berger: Do you think of Fred as a learning scientist or more of an artist? What have you taken away from this process?

Rydzewski: Both, actually. I sort of see Fred as a sort of triad. Artist, learning scientist and philosopher. Fred was a trained was also an ordained minister in the Presbyterian Church and an extraordinarily gifted pianist. He worked with some of the world’s brightest psychologists and pediatricians and psychiatrists in the world, all of whom were working in Pittsburgh at the same time. Benjamin Spock, and Erik Erikson and his mentor Margaret McFarland to name a few.

Without all those elements of Fred coming together, I don’t know that we would have had Mister Rogers’ Neighborhood.

The sun is beginning to set on another school year across the U.S. The Great Resignation may spill over into the Big Quit for the education sector.

Rydzewski and Behr may just have penned a moniker, poignant and expressive for a forever changed industry – when you wonder, you’re learning. Wonder has taken a backseat to the ills of society, maybe it wouldn’t hurt to stop, and watch paint dry.

Interviews have been edited and condensed for clarity.