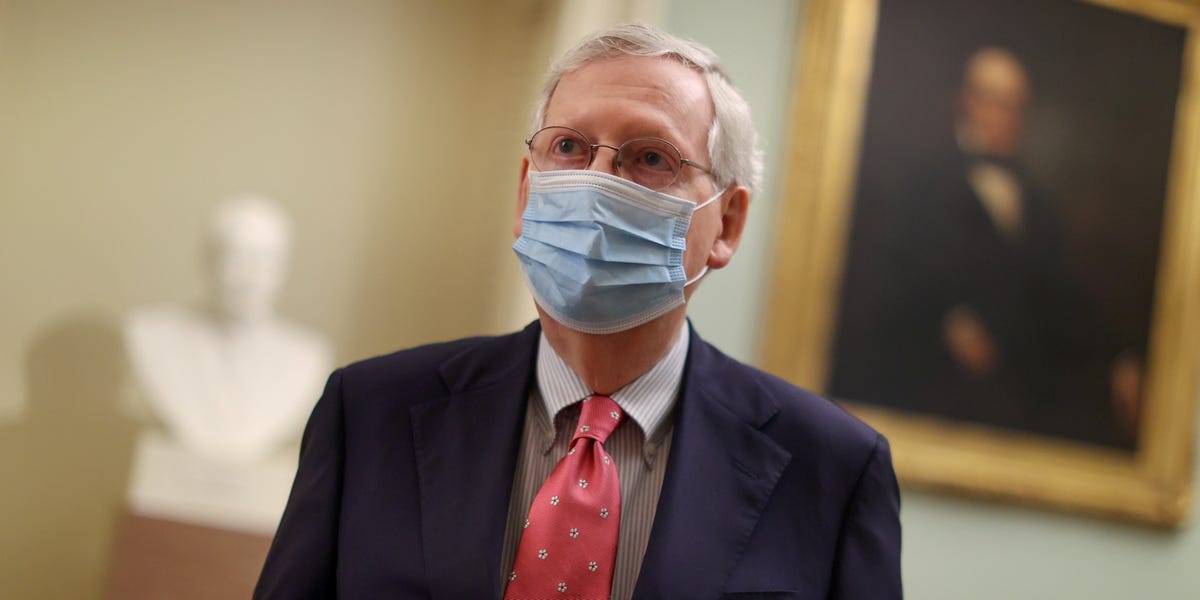 Senate Majority Leader Mitch McConnell said on Tuesday that the GOP supported a second wave of stimulus checks in its coronavirus relief bill.

His comment brings Republicans on board with Democrats in supporting a fresh round of payments to Americans. The Trump administration has also indicated that it would back a second set of stimulus checks. But key details remain unclear, such as the payment amount and whether it would phase out at a certain income level.

Read more: Top Republicans share details about the next coronavirus rescue package, including more checks for people, loans for small businesses, and $105 billion to reopen schools

McConnell has floated a $40,000 income cutoff in a bid to lower the cost of another spending package. While Republicans hope to keep new spending at roughly $1 trillion, Democrats are eyeing a package worth up to $3.5 trillion.

The economist Ernie Tedeschi has estimated that implementing that income cutoff could prevent as many as 20 million people from receiving checks.

Read more: GOLDMAN SACHS: These 17 trades can help investors maximize their gains from the stocks most affected by the US elections in November

“The legislation I have begun to sketch out is neither another CARES Act to float the entire economy nor a typical stimulus bill for a nation that’s ready to get back to normal,” McConnell said on the Senate floor on Tuesday.

In March, Congress authorized a wave of $1,200 payments for individuals earning up to $75,000 a year, plus $500 for each dependent child. The cash amount diminished until phasing out for those making above $99,000. Married couples earning up to $150,000 a year also qualified for the full payment.

Democrats have expressed support for more payments with the same criteria — the economic relief package that House Democrats passed in May included the measure.

A loose agreement on a second round of checks is a small victory for legislators’ hasty negotiations. The $600 weekly expansion for unemployment benefits is set to expire at the end of the month, yanking a critical federal lifeline from millions of jobless Americans.

Read more: Leka Devatha quit a cushy corporate career to start flipping houses. She breaks down how she made $1 million on a single deal by supercharging a simple strategy.

“We’re going to make sure that we don’t pay people more money to stay home than go to work,” Treasury Secretary Steven Mnuchin said on Monday during a meeting with Republican legislators. He added that the GOP was looking for a “technical fix” for unemployment insurance.

“I envision that this bill doesn’t get done by the end of July,” McCarthy said, adding that he expected to pass the package “probably in the first week of August.”

Read more: BANK OF AMERICA: Buy these 9 stocks poised to crush the market in any market environment as they spend heavily on innovation