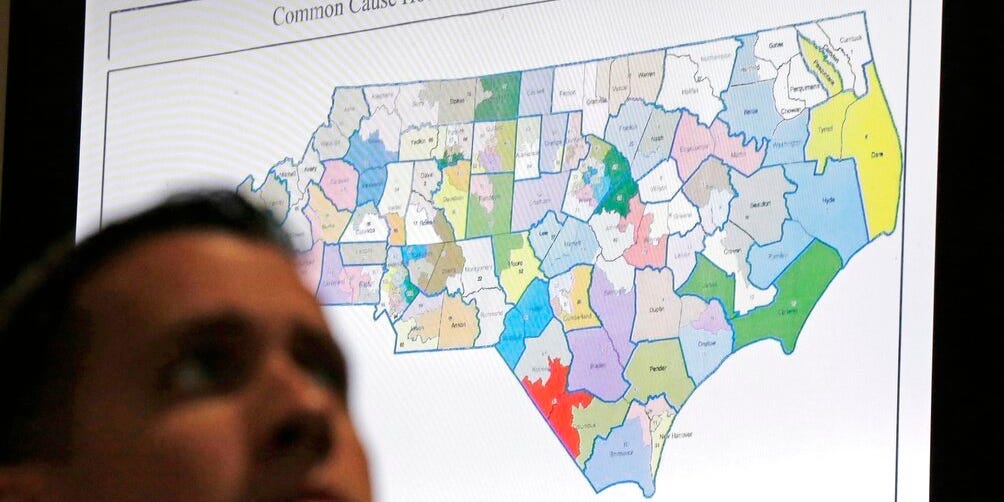 The North Carolina Supreme Court on Friday struck down the state’s new Republican-drawn congressional and legislative maps, giving Democrats one of their most consequential redistricting legal victories ahead of the 2022 midterm elections.

In a 4-3 decision, the court said that the current maps were illegal partisan gerrymanders that violated the state’s constitution, calling the congressional and state legislative maps enacted by the legislature “unconstitutional beyond a reasonable doubt under the free elections clause, the equal protection clause, the free speech clause, and the freedom of assembly clause of the North Carolina Constitution.”

The ruling continued: “When, on the basis of partisanship, the General Assembly enacts a districting plan that diminishes or dilutes a voter’s opportunity to aggregate with likeminded voters to elect a governing majority — that is, when a districting plan systematically makes it harder for one group of voters to elect a governing majority than another group of voters of equal size — the General Assembly unconstitutionally infringes upon that voter’s fundamental right to vote.”

The three Republican justices on the court dissented, arguing that the ruling “violates separation of powers by effectively placing responsibility for redistricting with the judicial branch, not the legislative branch as expressly provided in our constitution.”

The state Supreme Court made its ruling two days after opening arguments began on Wednesday, reversing a January 11 decision by a lower court that allowed the maps to stand.

The court gave the Republican-controlled General Assembly until February 18 to craft new redistricting maps for review by the judicial body, or a trial court will have to sign off on a fresh plan.

The decision is a win for Democrats, who have made a concerted effort to challenge Republican-drawn maps this year after being outmaneuvered by an aggressive GOP redistricting effort during then-President Barack Obama’s first midterm election cycle in 2010.

That year, Democrats lost 63 US House seats — wiping out their majority in the lower chamber — and ceded 680 state legislative seats to Republicans.

Moreover, as a result of recent population gains from the 2020 census, the state has earned an additional House seat through the reapportionment process.

In North Carolina, where no winning presidential candidate has carried the state with more than 50.4% of the vote since 2004, Republicans last year drew congressional lines that would have boosted their advantage in the US House delegation from 8 GOP-held seats and 5 seats for Democrats to 10-4, or potentially 11-3.

The GOP-crafted maps in the state created an immediate pushback from Democrats, who said that the districts disenfranchised Black voters, which make up 19% of North Carolina’s electorate and cast over 1 million ballots in the 2020 election, according to WFAE, a Charlotte-based NPR affiliate. (Democratic Gov. Roy Cooper is unable to exercise veto power over the maps.)

But, even before President Joe Biden took office, Democrats mapped out potential strategies to battle against conservative attempts to dominate the redistricting process after the 2020 Census. The most recent legal victories were in crucial swing states, Ohio and Pennsylvania, which appear to have given the party hope that it can emerge from the redistricting process on more solid footing than in 2010.

Biden’s approval rating currently hovers in the 40s and recent polls have revealed voter unease about the country’s direction.