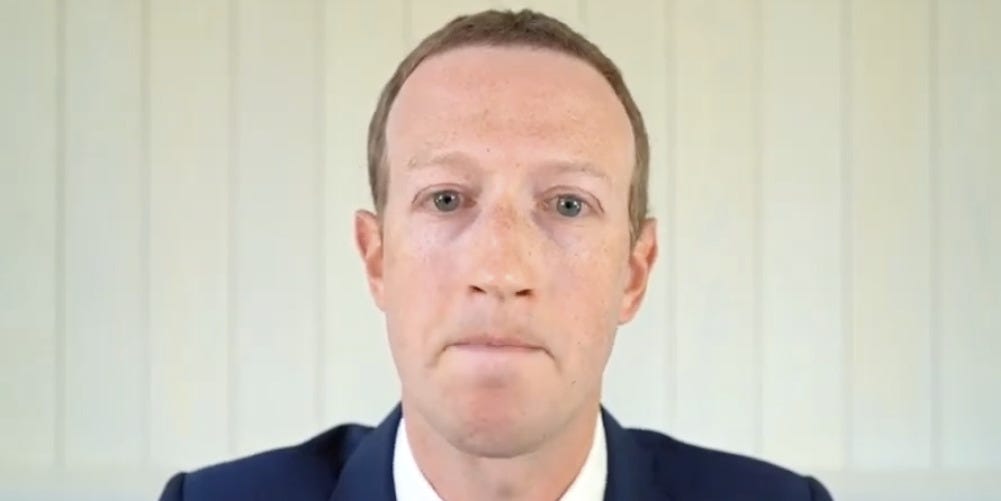 Patriotism, as Samuel Johnson observed some 245 years ago, is the last refuge of the scoundrel.

Making an appeal to national sentiments — or, relatedly, warning about the dire threat from foreign competitors — is also a time-worn tactic of corporate leaders who seek to evade scrutiny of their companies’ behavior or shed what they see as onerous regulations.

And so, on Wednesday, with Big Tech under the harsh glare of a Congressional antitrust investigation, the CEOs were quick to dust off the old playbook.

The success of Facebook, Google, Apple and Amazon — four companies with a combined market value of roughly $5 trillion — is the epitome of the American Dream, their CEOs told lawmakers at the House of Representatives antitrust hearing.

The success of these four tech giants is something to be cheered; the result of the American system, not any nefarious actions or problems in the market’s rules, they insisted.

Apple, CEO Tim Cook said, is “a uniquely American company whose success is only possible in this country.”

Amazon’s Jeff Bezos discussed the lessons in self-reliance and ingenuity that he learned being the son of a high-school aged single mother and the adopted son of an immigrant father. And on it went.

Most importantly, the CEOs implied or said directly, the US needs national champions like their companies to lead the internet age, because without them, foreign competitors — most worryingly, Chinese ones — will take over.

“China is building its own version of the internet focused on very different ideas, and they are exporting their vision to other countries,” warned Mark Zuckerberg, the CEO of “proud American company” Facebook.

“We believe in values — democracy, competition, inclusion and free expression — that the American economy was built on,” he said.

If it sounds familiar…

These types of arguments aren’t new. Sheryl Sandberg, Facebook’s chief operating officer, deflected questions about her company’s power by pointing at the threat from Chinese competitors in an interview with CNBC last year.

In fact, these types of arguments long predate the scrutiny of the tech giants. They’ve been used for decades by all stripes of American corporations to evade concerns about their power.

Financial services companies made similar arguments in the 1980s when they sought the repeal of regulations that limited their size and ability to operate across states lines, arguing that they needed to grow large to be able to compete against giant foreign banks. IBM and AT&T made such appeals when they faced antitrust scrutiny in the 1970s and 1980s, arguing that they were needed to help defend the US from the rising threat of competition from Japanese tech companies.

Indeed, such patriotic or nationalist arguments go back as far as the 1910s, during some of the first efforts in the US at breaking up monopolies, said Matt Stoller, the author of “Goliath: The 100-Year War Between Monopoly Power and Democracy.”

“This is a long-standing trend,” he said. He continued: “It’s always, ‘give us more power, we’ll defend you.'”

Every US company has an all-American story

The problem with such arguments is they’re banal, irrelevant, and misleading.

Pretty much any US company big or small has an all-American story to tell. At a basic level, the success of Amazon or Apple is no more or less impressive than that of the corner grocery that was founded by immigrants fleeing war or oppression. Nearly all founders and entrepreneurs have to overcome challenges and hardships, and the American system has led to outsized success for lots of companies past and present. Amazon, Apple, Alphabet, and Facebook weren’t the first, and they won’t be the last, regardless of whether regulators seek to limit their power.

What’s more, many of the companies that are being quashed by the tech giants have American stories too. We shouldn’t ignore, for example, how Amazon used underhanded tactics to undermine Quidsi, the owner of Diapers.com, or how it allegedly throttled the business of a small company that sold books through its site just because Amazon has lots of American workers and Jeff Bezos was born to a single mother. While Americans may benefit from the services Amazon offers and the jobs it fills, they’re hurt when it throttles competition. Prices can go up and employees of the competitors Amazon has stymied lose their jobs.

There’s little doubt that China and Chinese companies have a different vision for the internet than US companies. There are legitimate concerns about Chinese companies spreading the kind of surveillance and censorship that are endemic in China to other countries. But the best way to meet such international challenges is through encouraging innovation and competition here at home — not by giving the US tech giants a free pass to trample on their smaller domestic rivals.

Giant monopolies tend to stop innovating. They become sclerotic and have trouble adapting as markets and fashions change. But breaking up said monopolies can spur innovation and the creation of whole new markets.

History bears this out, repeatedly. The worldwide dominance of the Big Three automakers in the 1950s and 1960s left them wholly unprepared for the oil shocks of the 1970s and the onset of competition from more nimble Japanese companies. Likewise, Boeing’s troubles in recent years are attributable to its ability to wipe out all US competitors in the commercial airline market, said Stoller.

“When you concentrate power, you destroy companies,” he said.

On the flip side, the antitrust actions against IBM and AT&T opened up the tech industry for Microsoft, Apple, and Intel and for the internet itself. And the later antitrust case against Microsoft allowed Google, Facebook, Netflix, and other companies to emerge.

So ignore the patriotic appeals and the grim warnings about Chinese competition from the desperate CEOs. We’ll all be better off if we break up Big Tech.

Got a tip about Big Tech? Contact Troy Wolverton via email at [email protected], message him on Twitter @troywolv, or send him a secure message through Signal at 415.515.5594. You can also contact Business Insider securely via SecureDrop.