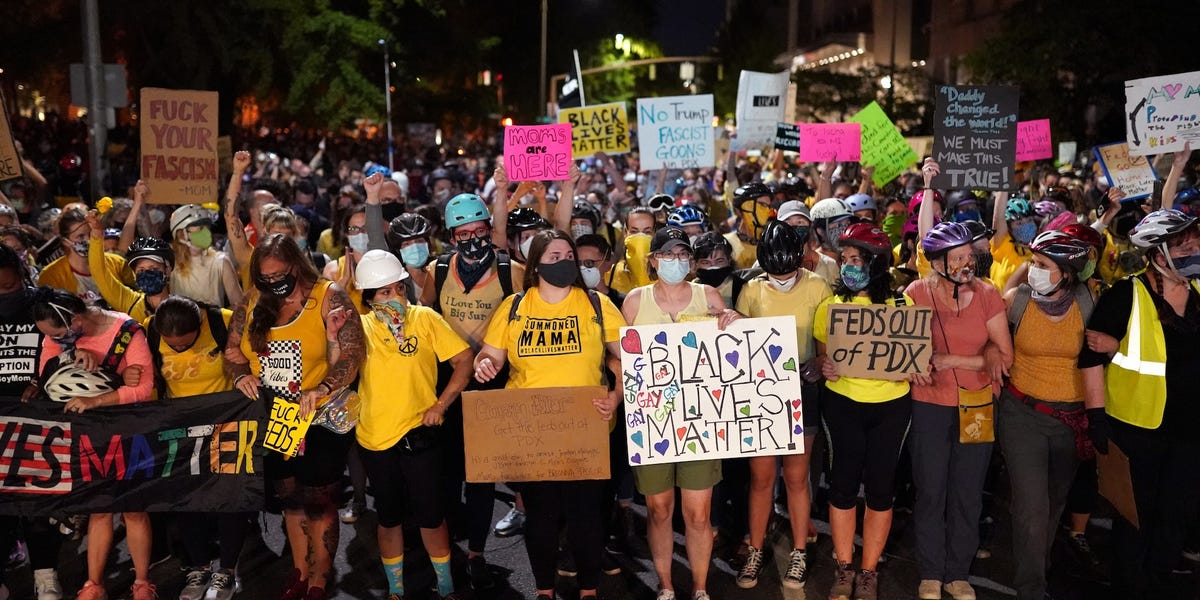 President Donald Trump on Sunday described the “Wall of Moms” that emerged in recent weeks to protect protesters from federal officers in Portland, Oregon, as a “scam.”

“The ‘protesters’ are actually anarchists who hate our Country,” he tweeted. “The line of innocent ‘mothers’ were a scam that Lamestream refuses to acknowledge, just like they don’t report the violence of these demonstrations!”

He did not elaborate on what he meant by a “scam” or offer any evidence of one.

His tweet quoted a tweet from Jennifer Franco, a reporter with the right-wing One America News Network, sharing news that a US District Court judge denied the Oregon attorney general’s request for a restraining order to prevent federal agents from detaining protesters in Portland.

The Trump administration sent the federal agents to the city earlier in July, saying they were sent to protect federal property.

The agents have worn military-style uniforms with no insignia, snatched some protesters and put them in unmarked cars, arrested people without explanation, and used tear gas and shot impact munitions at protesters at close range.

Women in Portland earlier this month formed a “Wall of Moms” to protect protesters from these agents. The first had about 30 women, with more joining since then.

The women carry peace signs, wear bicycle helmets, and link arms as they form at the front line of protests.

Bev Barnum, who started the group, told BuzzFeed News on July 19 that she hoped the women’s nonthreatening appearance would keep agents from confronting protesters.

A “Wall of Vets” and a “Wall of Dads” have also joined the protests, with veterans and fathers aiming to protect the demonstrators.

Protests in Portland have taken place for 60 consecutive nights — since the death of George Floyd on May 25 as a Minneapolis police officer knelt on his neck for more than eight minutes.

Floyd’s death sparked demonstrations around the US in what could be the largest social movement in US history.

Portland’s protests have mostly been peaceful, though there have been reports of vandalism and clashes with law-enforcement officials.

Local officials and the state’s lawmakers have criticized the presence of the federal agents and their actions in the city.

Oregon Sen. Ron Wyden told The Guardian over the weekend the US “could be staring down the barrel of martial law in the middle of a presidential election.”

He said in a statement on Thursday that “the violent tactics deployed by Donald Trump and his paramilitary forces against peaceful protesters are those of a fascist regime, not a democratic nation.”

Oregon’s lawmakers have called for the immediate removal of the agents, saying that “neither the public, nor local leaders, nor federal representatives for the people of Oregon know who these agents are.” Portland’s mayor has also criticized the agents’ heavy-handed tactics.

The police in Portland declared a riot at a protest early on Sunday after a group of protesters toppled a fence around the federal courthouse downtown, The Oregonian reported.

The Justice Department’s internal watchdog announced last week that it would investigate the federal agents’ response to protests in the city.

Trump has said he intends to send agents to other cities, as they have done a “fantastic” job in Portland.