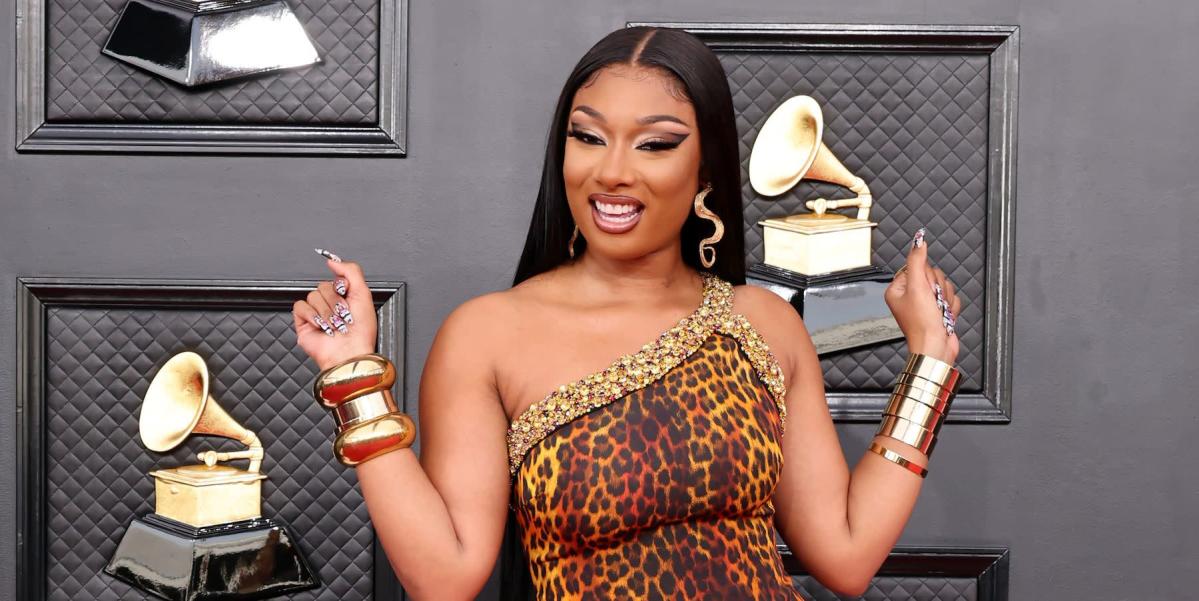 Megan Thee Stallion embraced her wild side for her second-ever Grammys.

The Sweetest Pie rapper walked the red carpet in a skintight one-shoulder gown by Roberto Cavalli. The fierce dress features gold trim at the neckline, a hip-high slit with a gold stud decoration, and dual animal prints—a leopard pattern on the outer fabric and an ombré zebra pattern on the inside.

The 27-year-old rapper has had a standout year since she took home three awards at last year’s Grammys. She followed up her debut album Good News with the single “Thot Sh*t,” which addressed conservative criticism to her music through a powerful music video. (The song is nominated for Best Rap Performance tonight.) She also made a lifelong personal accomplishment: graduating with a bachelor’s degree in health administration last December.

Although the “Savage” rapper isn’t scheduled to perform tonight, she did make her debut on another rarefied awards stage last weekend. Megan gave the first female rap performance in the history of the Academy Awards, joining the cast of Encanto for a remixed performance of the Disney hit “We Don’t Talk About Bruno.” She even had a cute interaction with another star during her rap, which included the lyrics, “Stars everywhere / I need to see Oscar, Zendaya over there.”

Her lyrics also included a mention of her own Oscar aspirations, with the lines, “Believe I’mma make it, I’m comin’ for that gold / You can add it to my shelf, Academy Award.” The rapper’s already taken her first steps toward the filmmaking award, announcing her exclusive first-look deal with Netflix on television shows and other projects last December.

“Megan is a multitalented creative force who has consistently made her mark on culture,” Tracey Pakosta, head of comedy at Netflix, said at the time. “She’s always growing and evolving as an artist, and we’re thrilled that she’s making a home at Netflix for this next chapter in her journey.”