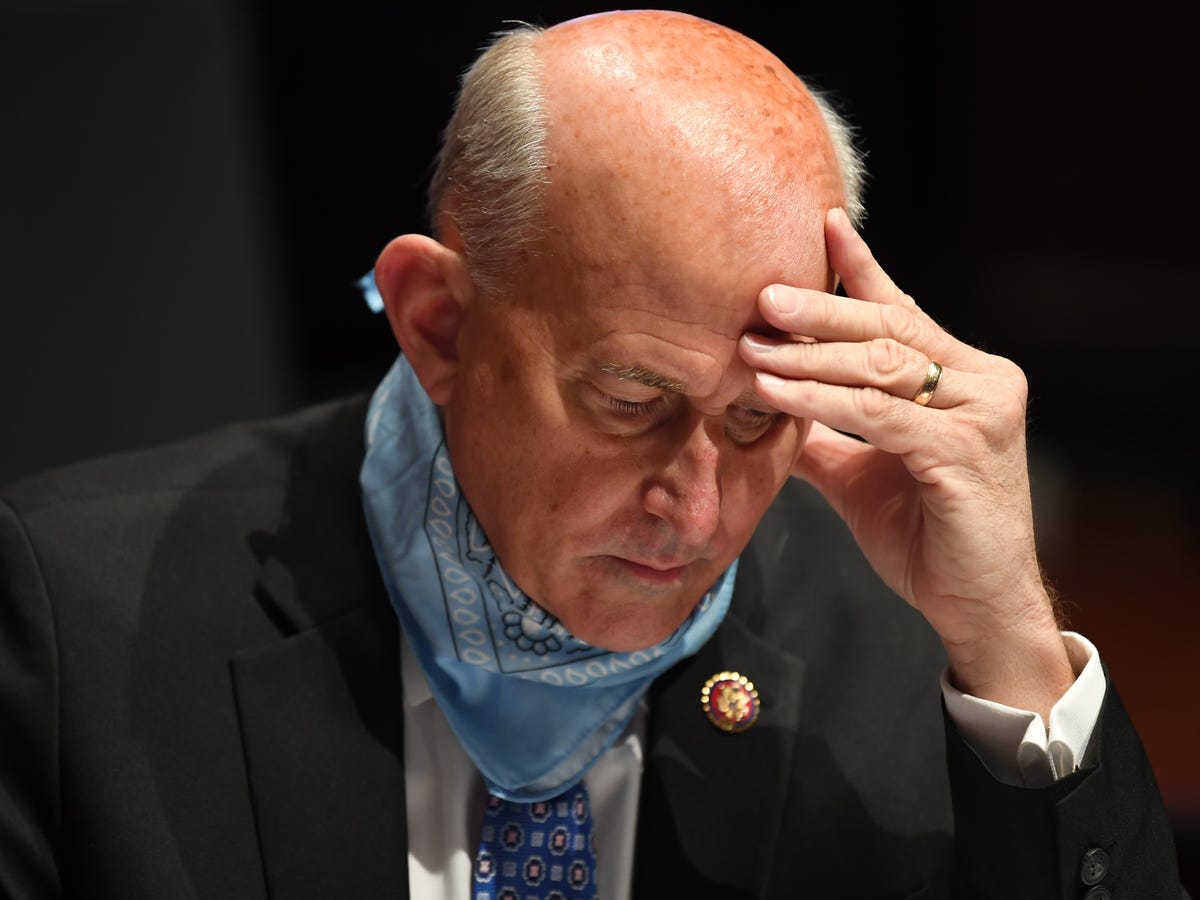 Want some coronavirus with that barbecue? Probably not. But Texas Rep. Louie Gohmert who tested positive on Wednesday after refusing to wear a mask around the US Capitol, is scheduled to host donors next month at a “birthday bash” fundraiser in Tyler, Texas. Fox News host Judge Jeanine Pirro is expected as his chief guest.

The invitation to Gohmert’s event, which Insider obtained, promises a signed copy of Pirro’s book, a VIP meeting and photo with the lawmaker for a top donation of $5,600.

Top Republicans are planning big-dollar soirees throughout August as they engage in a not-so-socially-distanced race to zap a fundraising gap with Democrats before November 3.

By Wednesday evening, it was unclear Gohmert’s positive COVID-19 test results would deter him or other Republicans from continuing with plans for in-person fundraisers. He appeared to downplay his diagnosis and hadn’t announced a cancellation of the birthday bash.

“Reports of my demise are a great deal premature,” Gohmert said in a video posted to Twitter announcing his coronavirus diagnosis. “I’m asymptomatic, I don’t have any of the symptoms that are listed as a part of COVID-19, but apparently I have the Wuhan virus.”

House Minority Leader Kevin McCarthy of California is bringing together supporters in Jackson Hole, Wyoming, in mid-August with tickets running at $50,000 per donor, according to an invite seen by Insider. Sen. Mike Crapo is hosting a “Hook & Bullet” trap shooting and fishing outing in Sun Valley, Idaho, a few days later.

President Donald Trump himself has been prolific on the fundraising trail, making another stop Wednesday in Texas to raise money for his reelection and the Republican Party.  Last Saturday, the president attended a fundraiser at his New Jersey golf club to help his affiliated super PAC, America First Action, raise cash.

“Republicans like to see each other when we give money,” said one Republican fundraiser.

But the situation is making some Republicans nervous about unwittingly spreading the coronavirus. Republican operatives who pointed out the trend of in-person events throughout August said that the number and frequency of those meetings is causing their candidates stress.

Shortly after publication of this article, former 2012 Republican presidential candidate Herman Cain died of COVID-19. He had attended a Trump campaign rally last month in Oklahoma and fell ill soon after, although it’s unknown whether he contracted COVID-19 at the rally or elsewhere.

The mad sprint for money comes as Republicans try to overcome a significant campaign cash lead held by Democrats running for the House, Senate and the White House.

After enjoying a massive fundraising lead for most of the 2020 campaign, Trump has watched Biden outraise him in recent weeks. And pro-Biden super PACs have more money than those backing Trump.

In a statement to Insider, the DCCC said it has encouraged Democratic House candidates to “follow the recommendations of local health officials, err on the side of caution and hold as many events virtually as possible.”

But the Republican fundraising machine continues thrumming, almost as though the country were back to its better days.

Texas Senator Ted Cruz, who is cultivating relationships with Republicans who could help him run for president in 2024, is hosting a “20 for 20” fundraising retreat in Aspen, Colorado, with the chance to drink bourbon and eat s’mores with his team, followed by a skeet shooting outing with him or hiking with his wife, Heidi, according to an invite seen by Insider.

A Cruz aide told Insider that masks will be provided at all events and people will be safely distanced apart. Cruz’s team hasn’t had any cancellations from worried donors, the aide said.

Crapo’s two-day event includes a “Western BBQ” at the Sun Valley Lodge, with an Olympic-sized swimming pool, tennis court, bowling alley, exercise room, beauty salon and spa. The minimum donation is $2,700 to his campaign and separate leadership PAC, according to an invitation obtained by Insider. Crapo’s Senate office directed inquiries about the fundraising event to his reelection campaign, which didn’t respond to several requests for comment.

On Saturday, Republican Sen. Martha McSally and Rep. Paul Gosar, both of Arizona, headlined a Gila County Republican Party fundraising event that promised a cash bar, buffet dinner, and “new friends to meet and visit with.” A photo an attendee posted on Twitter showed McSally, who is running in a tight race against well-funded Democrat Mark Kelly, wearing an American flag face mask. She removed it to deliver remarks.

The senator “implores” all Americans to follow such guidelines and likewise supports “Arizonans’ constitutionally protected rights to peacefully assemble ahead of the most consequential election of our lifetime,” Anderegg said.

Gohmert campaign officials did not immediately respond to questions about whether he will still conduct the Aug. 20 fundraiser now that the lawmaker has COVID-19.

If the event proceeds as planned, the top Gohmert ticket to the barbeque, with all the fixins, also scores donors passes for eight guests and “a special gift from Louie.”

The invite did not specify what the “special gift” is.