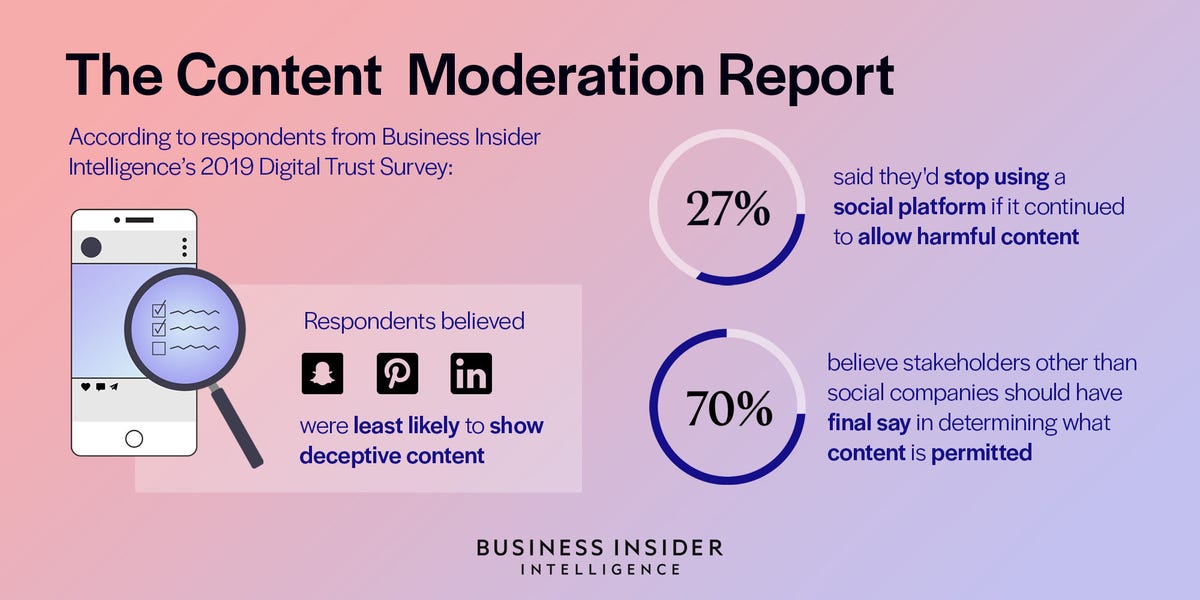 Brands, lawmakers, and even social media execs are coming to grips with the reality that platforms are not up to the task of moderating content on their own, primarily due to their massive scale. The scale of the problem — and the difficulty of fixing it — roughly correlate with the scale of platforms themselves.

Even if 99% of harmful content is removed from a large platform, an enormous amount can still remain. Even leadership at social platforms believe their platforms should have oversight from external stakeholders, with some either publicly stating that belief or privately meeting with regulators. Tech execs including Facebook CEO Mark Zuckerberg, Google CEO Sundar Pichai, and Twitter CEO Jack Dorsey have each come out in support of new regulation around platform content.

Social platforms are committed to getting content moderation right, but a paradigm shift in how online content is governed on platforms is likely coming. Additional stakeholders — like brands, lawmakers, or even users themselves — will increasingly be called in to aid the effort.

Most significantly, regulators around the world are likely to intensify pushes to influence or control online content moderation — and first attempts are likely to be led by the EU, which was also the first mover on creating data privacy regulation. In the near term, we expect regulation to take shape around two areas: Governments may start requiring companies to make more detailed disclosures of their respective moderation efforts; and governments will create rules aimed specifically at moderating political content.

In The Content Moderation Report, Business Insider Intelligence analyzes one of the most pressing issues currently facing social platforms — content moderation — and lays out how we expect the debate to evolve and why we think regulation is soon to emerge.

This report also uses proprietary data collected from our 2019 Digital Trust Survey, an online survey of 1,974 respondents from Business Insider’s proprietary panel fielded from April 23 to May 16, 2019. Respondents to our Digital Trust Survey are social media users and tend to be younger, male, affluent, North American, and early adopters of tech.

As a result, respondents in our sample are more likely to be aware of changes on tech platforms, and they also have money to spend by clicking into ads they see on platforms. So, while our sample isn’t representative of the general population, it offers a window into sentiment among a high-value segment.

Here are a few key takeaways from the report:

In full, the report: