The rise of Wallonia 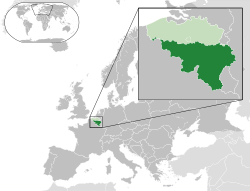 Wallonia is one of 3 regions of Belgium, along with Flanders and the Brussels-Capital Region. In recent history Wallonia has tail-ended the other two economically. More recently several measures are being put in place to accelerate economic growth in Wallonia. Here is a look at how they are shaping up.

Wallonia is a small autonomous region which primarily exports machinery, equipment, metals, and chemical products. According to the National Bank of Belgium, exports from Wallonia formed merely 12% of the total national exports in 2018. However, this was not always the case.

During the industrial revolution Wallonia was a thriving economic center of Europe. It had abundant coal reserves and advanced blast furnace production units. Then the world gradually shifted away from industry and toward a knowledge-based economy. Somehow Wallonia did not keep pace with the other 2 regions of Belgium. This also reflected in migration trends. Today, most foreign migrants in Belgium live and work in Brussels or Flanders. They regularly send remittances to their home countries via the Ria Money Transfer App and similar channels. Wallonia’s share of migrants has remained comparatively smaller.

The Walloon Institute for Evaluation, Prospective Studies and Statistics (IWEPS) conducted an analysis of the region in 2013. It concluded that the economic slowdown since the global crisis in 2008 has severely impacted economic productivity in the region. In 2018 Wallonia recorded a GDP per capita of EUR 25,700. This paled in comparison with the Brussels-Capital Region (EUR 61,300) and Flanders (EUR 36,300). The Walloon government has rolled out several recent measures to stimulate economic growth in the region.

The Walloon government unveiled an aggressive policy plan in 2019. It was named the Déclaration de Politique Régionale du Gouvernement Wallon (Walloon Government’s Regional Policy Declaration) 2019-2024. It explains the region’s social, ecological, and economic ambitions. The policy document lays out a 5-year roadmap that will put the region on the fast track to economic progress. It identifies the creation of employment as one of the cornerstones for boosting the region’s economic growth rate. The Walloon government has committed its support for the professional integration of employees and training people for jobs that are in high demand. The government also announced plans to soon implement an ambitious investment policy in the fields of infrastructure, housing, renewable energy, and research and innovation.

The Walloon government launched a fresh initiative in 2020 to help companies bounce back after the pandemic-induced slowdown. The Get up, Wallonia! initiative provides new economic orientations to companies in prioritizing investment strategies. It recognizes the role of the self-employed and SMEs (small and medium enterprises) in creating value and jobs. It helps firms restore productivity to their pre-pandemic levels, with emphasis on innovation in R&D and exports. The initiative aims at promoting the numerous advantages of digital technology, social economy, and cooperative entrepreneurship. It also provides guidelines on how to use investments and public contracts as contributors to development.

The Wallonia Innovation and Growth, or W.IN.G, is an initiative launched in 2015 which is still going strong. It represents an investment wallet of EUR 50 million, created and managed by the Société Régionale dʼInvestissement de Wallonie (Regional Investment Company of Wallonia). The corpus gives start-ups and SMEs direct access to funds for business R&D and innovation. W.IN.G extends grants and invests in new digital startups with large growth potential and strong market prospects. W.IN.G also helps startups find investors with an important portfolio of partners. Startups can get access to a large network of investors and can acquire investments from EUR 50,000-250,000. The European Commission’s Wallonia regional policy analysis in 2018 lauded the implementation of W.IN.G. The analysis observes that, “…with this type of structure, companies are built faster, which is an advantage in the digital sector.”

The Vanguard program was launched by the EU in 2014. It is a long-term initiative with the primary objective of developing under-utilized regions across Europe. The initiative aims at developing inter-regional cooperation and support clusters for emerging industries. The committee chose the Wallonia region of Belgium for its vast underutilized resources and high growth potential. Life sciences, agro-industries, logistics, and construction were identified as some of the key growth sectors. Through this initiative there will be complete synergy between regional policies and EU policies. Companies in Walloon will benefit from international cooperation via this initiative. Willy Borsus, Vice-President of The Vanguard Initiative committee, believes that “the third industrial revolution will be based on Europe and the regions of Europe. Wallonia will totally be part of this redeployment.”

Hemant G is a contributing writer at Sparkwebs LLC, a Digital and Content Marketing Agency. When he’s not writing, he loves to travel, scuba dive, and watch documentaries.