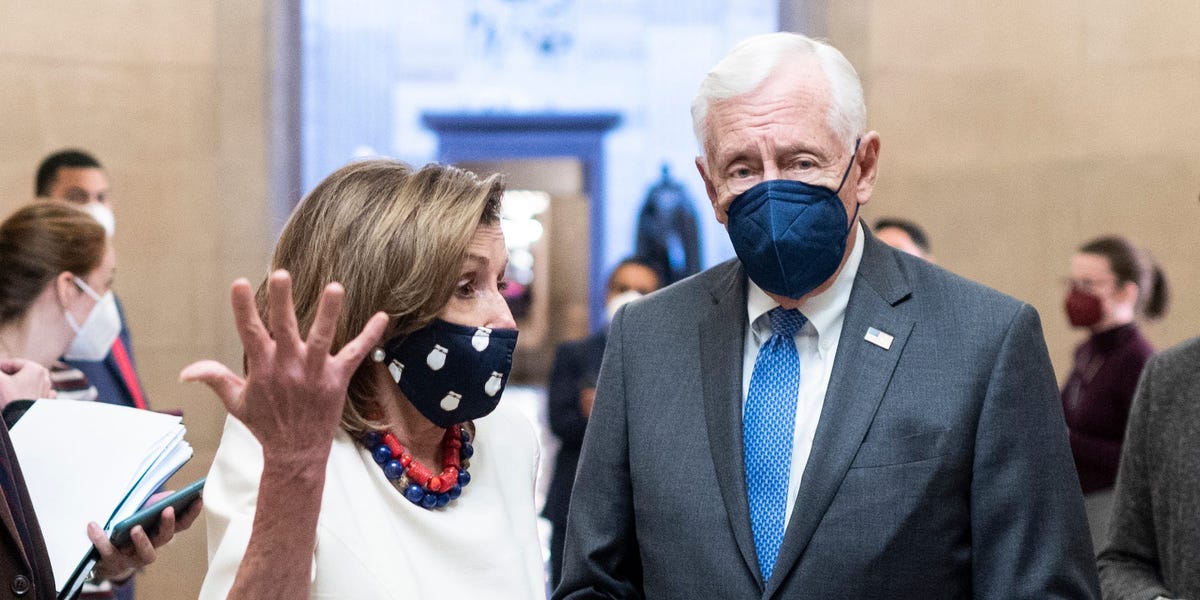 House Majority Leader Steny Hoyer said on Tuesday that Democrats would consider a stock trading ban for members of Congress, but said he was “not sure that it’s necessary” because blatant insider trading is already illegal.

Hoyer’s comments come after House Speaker Nancy Pelosi reversed her firm opposition to a ban, and other Democratic leaders signaled that they’d consider a flood of new proposals to ban stock trading by lawmakers. “If members want to do that, I’m okay with that,” she said last week.

In an interview with Politico, Hoyer was asked about a letter from Rep. Jared Golden of Maine first reported by Insider that called for both Pelosi and Republican House leader Kevin McCarthy to “swiftly bring legislation” to ban stock trading to the floor. The bipartisan letter was signed by 27 lawmakers and included members from across the ideological spectrum, ranging from Democratic Rep. Rashida Tlaib of Michigan to Republican Rep. Matt Gaetz of Florida.

“This is an issue that I think is dealt with in present law,” said Hoyer. He referred to the case of former Republican Rep. Chris Collins of New York, who resigned from Congress in 2018 and was sentenced to several months in jail for insider trading.

“We have a law that says you can’t do what people are concerned about doing,” he added. Last week, Pelosi said blatant insider trading is “a Justice Department issue.”

Insider trading was banned by the Stop Trading on Congressional Knowledge (STOCK) Act in 2012, which instituted a system under which both lawmakers and congressional staffers are required to report their stock transactions in a timely manner.

But Insider’s recent “Conflicted Congress” investigation found that at least 54 current members of Congress and almost 200 senior congressional staffers have violated the law by failing to disclose their transactions on time. And the law’s enforcement is uneven and inconsistent.

Insider also identified numerous examples of federal lawmakers trading stocks in industries they oversee as part of their congressional committee assignments, including within the defense, healthcare, and energy industries, posing a potential conflict of interest.

In response, a growing number of lawmakers have proposed bans on stock trading by lawmakers, including competing bills put forward by Democratic Sen. Jon Ossoff of Georgia and Republican Sen. Josh Hawley of Missouri.

Recent polling also shows that at least 67% of Americans support a ban, and McCarthy reportedly discussed the issue with donors recently at a Republican retreat.

In response, Pelosi has asked the Committee on House Administration to review members’ compliance with the STOCK Act and consider the range of bills that have emerged.

But Hoyer expressed reservations about the idea of a ban.

“I want to look carefully at legislation that takes away from members the ability to make investments that we encourage in every other sector,” he said. “The business community, the legal community, the medical community, they can all invest. And I’m not sure that it’s necessary to do that because I think the current law covers what they want to preclude.”

That largely echoed Pelosi’s initial position against a ban. “We are a free-market economy. They should be able to participate in that,” she said in December, referring to lawmakers.

While it appears that Hoyer did not trade stock in 2020, a recent financial disclosure does show that the Maryland Democrat owns up to $1,000 worth of shares in Telkonet, a provider of energy-management technology. Reached for comment, his office told Insider that Hoyer has held the stock for decades and does not actively trade.

“Leader Hoyer purchased the stock in question about 20 years ago and he has not traded, nor bought or sold this or any other stocks since,” Hoyer spokeswoman Margaret Mulkerrin told Insider. “It currently has negligible value. Mr. Hoyer does not actively trade individual stocks.”

Hoyer also echoed Pelosi’s comments on the issue last week, expressing an openness to new legislation provided it has support among rank and file House members.

“Having said that, I think we’ll consider this, and we’ll see if the majority believe that we ought to preclude it altogether,” he said.