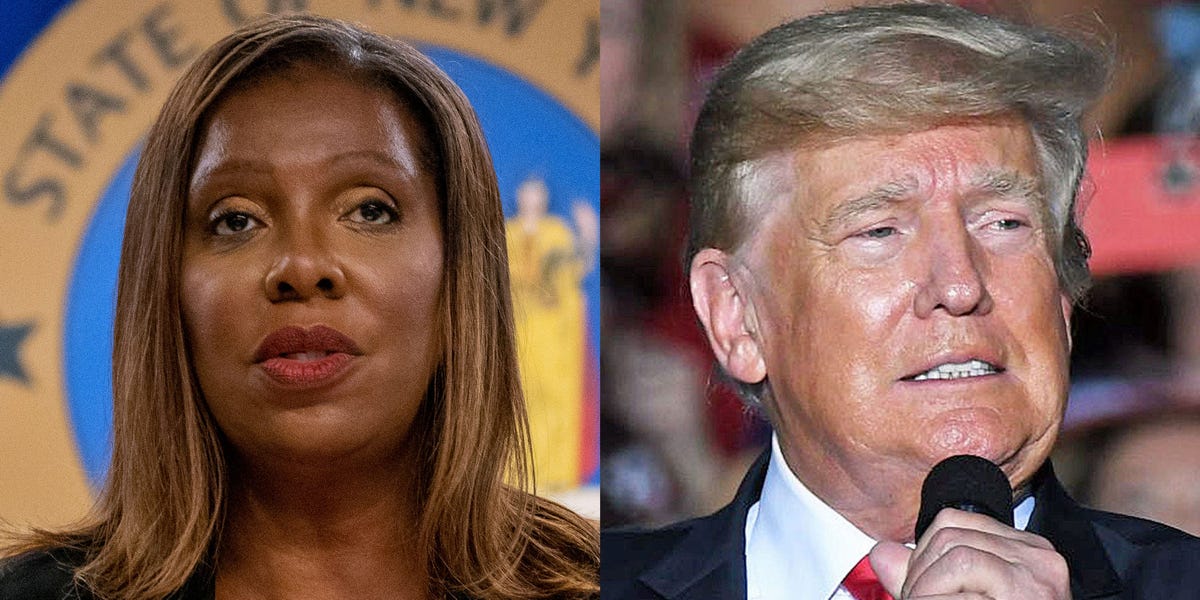 The Trump family continued its fight on Monday against New York Attorney General Letitia James’ efforts to grill them under oath, filing a lengthy appeal that seeks to quash her subpoenas.

In a 63-page filing in Manhattan, lawyers for former president Donald Trump, Ivanka Trump and Donald Trump, Jr., reprise many of the same arguments they’ve been using since they were first subpoenaed in James’ probe of the family business in December of 2021.

The appeal argues that James has demonstrated her political “bias” against Donald Trump through numerous “inappropriate” public threats to prosecute him and his New York real estate business.

“These subpoenas … followed an extraordinary and unprecedented barrage of inappropriate public statements starting in 2018 made by then-candidate Letitia James and, later, elected Attorney General Letitia James,” the appeal states, “in which she promised and threatened investigation and prosecution of Donald J. Trump and those closest to him.”

It also argues that the three subpoenas, filed as part of James’ 3-year civil probe, are entangled in a criminal probe her office is also conducting.

Anything the three Trumps say in the AG’s civil probe could be used against them in the AG’s criminal probe, which is itself sharing information with prosecutors with the Manhattan District Attorney’s Office, the lawyers argue.

But by using a civil subpoeana, James is able to gather evidence from the Trumps without granting them the automatic immunity that comes with a criminal subpoena, they argue.

The civil subpoenas are being used as an “end-around,” to avoid immunizing the Trumps while still compelling them to testify, the brief says.

As first reported by the New York Times, the Manhattan DA’s investigation has “unraveled” this year under the borough’s new top prosecutor, Alvin Bragg.

No one in The Trump Organization’s “C-Suite” has flipped against their boss during the course of the office’s 3-year investigation of Trump’s business; the probe has so far yielded a single felony tax fraud indictment.

But in Monday’s appeal, the Trump lawyers still make mention of that lone indictment, which alleges ex-CFO Allen Weisselberg and The Trump Organization schemed to hide $1.7 million in Weisselberg’s income from taxing authorities.

“Lest there be any doubt that this was a joint prosecution, on the day of the indictment, Attorney General James and [then Manhattan DA Cyrus Vance] presented a unified front to the public, arriving for the arraignment together, sitting next to each other in the front row of the courtroom and leaving the courthouse side by side,” the appeal says.

The appeal also argues that the Manhattan judge who ordered the Trumps to comply with James’ subpoenas last month erred when he cited federal law in saying the three could just sit for the deposition and invoke their Fifth Amendment right against self-incrimination.

The judge, Manhattan Supreme Court Justice Arthur Engoron, should have been guided by New York state law, under which anyone testifying under subpoena in a criminal probe must be granted immunity, the Trump lawyers argue.

It’s a stance that assumes James’ acted as a prosecutor when issuing the three civil subpoenas, something her office has pushed back hard against and Engoron has rejected.

“Unfortunately, the trial judge, Justice Engoron, did not address the major issue that we had, which is that this is not to be considered under federal law,” Trump family lawyer Ron Fischetti told Insider of the appeal’s main point.

“It’s to be considered under state law,” he said.

“And we prove in this appeal beyond a reasonable doubt that the Attorney General was acting as a state prosecutor, with the District Attorney, and therefore this is subject to the statutory and constitutional laws of New York state.”

James issued a statement shortly after the Trumps’ appeal was filed.

“Donald J. Trump, Donald Trump, Jr., and Ivanka Trump were ordered by a judge to comply with our investigation into Mr. Trump and the Trump Organization’s financial dealings,” it said.

“Despite continuous efforts to impede this investigation, no one can stop our pursuit of justice, no matter how powerful they are. We will continue to follow the facts without fear or favor.”

A decision on whether the Trumps must indeed sit for depositions could take months.

Under an expedited schedule agreed to earlier this month by James and the Trump family, the Attorney General’s office now has until March 28 to file their response to the appeal.

Oral arguments have yet to be scheduled; a decision by the state Appellate Divisision’s First Department would then follow.