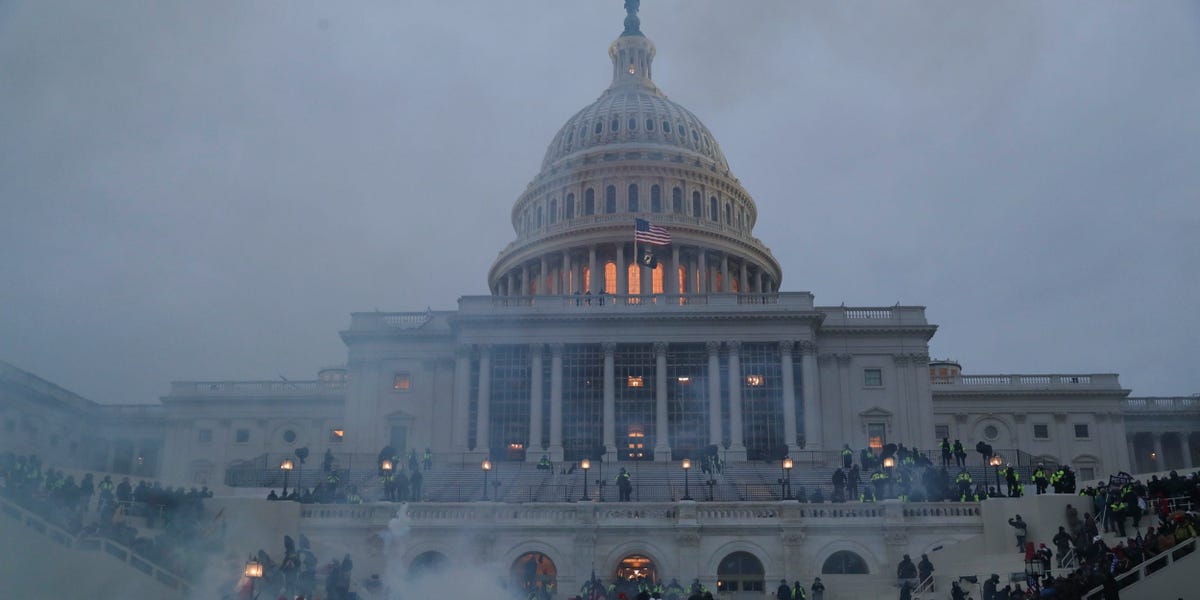 President-elect Joe Biden expressed confidence Friday afternoon his inauguration would be secure despite the deadly pro-Trump mob that infiltrated the Capitol.

But hours later Twitter warned there’s talk in pro-Trump online forums of more violence in Washington both before and during the scaled-down January 20th outdoor ceremony marking the start of the Biden administration amid a global pandemic.

The social media platform that Trump used to fuel his political ascent to the White House justified its permanent ban on @realdonaldtrump with specific concerns about more attacks on the Capitol around the inauguration.

Twitter referenced recent posts from the president and his top social media staffer, as well as plans that “have already begun proliferating on and off-Twitter, including a proposed secondary attack on the US Capitol and state capitol buildings on January 17, 2021.”

Trump’s final tweet Friday morning to his 88.7 million followers said he’d not be attending the Biden inauguration. That, plus an earlier message from White House social media director Dan Scavino about “an orderly transition” to the Democratic administration  “may also serve as encouragement to those potentially considering violent acts that the Inauguration would be a ‘safe’ target, as he will not be attending,” Twitter said in its statement justifying its permanent ban on the personal account to the 45th president of the United States.

Just hours earlier Biden expressed confidence in the US Secret Service to keep secure the scaled-down inauguration that will come nearly a year into the COVID-19 pandemic that’s killed nearly 1.9 million people worldwide.

Washington DC remains under an official state of emergency through the final days of Trump’s presidency and with warnings growing of more armed marches and possible violence in the capital.

One flyer that Insider found Friday night on the social media site Parler advertises a Jan. 17th “REFUSE TO BE SILENCED ARMED MARCH ON CAPITOL HILL & ALL STATE CAPITOLS.” NBC News reported right-wing extremists on the social media site Parler and the platform TheDonald are vowing a return to the nation’s capital for the Biden inauguration. NBC also reported there are fliers for multiple rallies planned for Jan. 17 by the far-right militia group, the “Bugaloo bois.”

A Biden inaugural planning committee spokesman said there were no updates when asked about the chatter surrounding a Jan. 17 threat of attacks on the US Capitol. The congressional committee tasked with planning the day did not immediately respond to questions on Friday night.

Biden’s big day had already been scaled down due to the pandemic.

For weeks, the former Democratic vice president has been urging his supporters not to attend an inauguration event that drew an estimated 1.8 million people back in 2009 when he took the oath alongside President Barack Obama.

Instead, Biden said his team has been working to deliver a seamless, virtual event, with advice from the Democratic National Committee. Even his own staffers are expected to be sparse. Only the most senior aides and those who have helped with inaugural planning are scheduled to attend. Others are being urged to watch online or the old-fashioned way on television.

Biden and Vice President-elect Kamala Harris will take the oath of office on the Capitol’s West Front. But stands that had been erected along a parade route are being taken down. And crews put up a seven-foot-tall fence around the entire Capitol on Thursday in the aftermath of the melee that left five people dead, including Capitol Police officer Brian D. Sicknick.

Secretary of the Army Ryan McCarthy said the fence would stay in place for at least 30 days.

The pandemic has prompted a scaled back event for many.

Tickets are being limited. The inaugural luncheon in the Capitol is gone. A Pennsylvania Avenue parade will be virtual.

For security purposes, Biden’s inauguration was long ago designated a National Special Security Event by the Homeland Security Department. That means planning has been underway for about a year led by the Secret Service and including the Capitol Police, the FBI, the US Park Police, the Metropolitan Police Department of Washington DC and other law enforcement and public safety agencies in the surrounding area.

An additional 6,200 National Guard members from six neighboring states to the nation’s capital are also on call and can aid Capitol Police and law enforcement for 30 days, should they need additional support.

Neither Trump nor the Homeland Security Department made any move to designate January 6th a National Security Special Event despite the online chatter that it could get violent at a Trump rally to protest the Electoral College results.

Former senior law enforcement and Secret Service officials told Insider they were baffled as to why the Trump administration didn’t make the move.