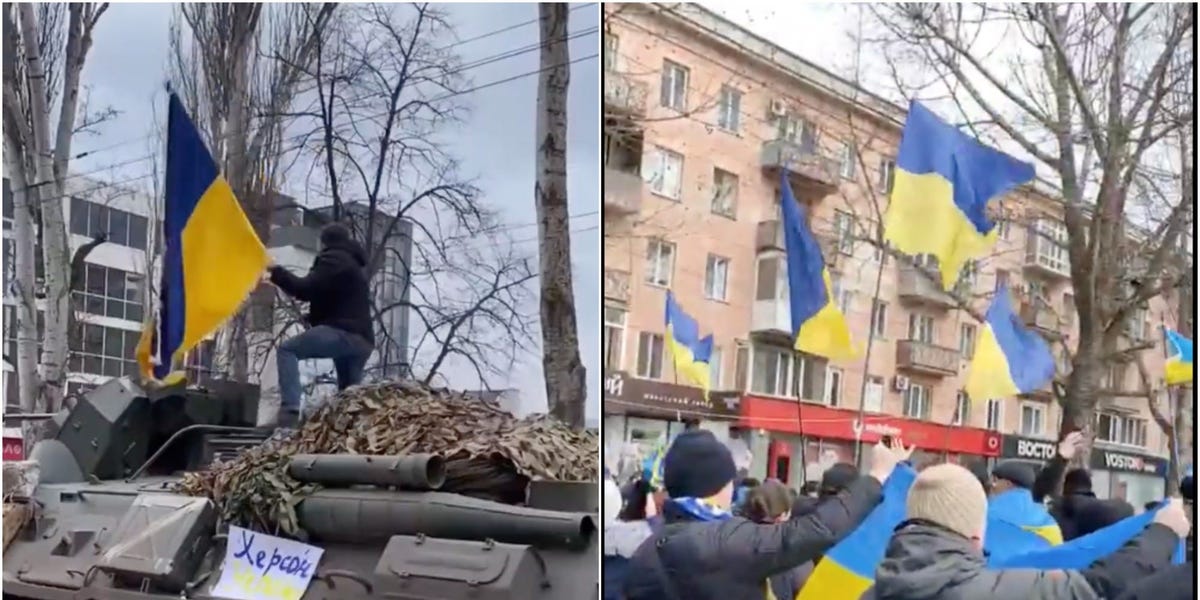 A Ukrainian protester in the occupied city of Kherson said Russian forces are “really scared” of demonstrators who have taken to the streets since the city was invaded last week.

In a promotional video posted to YouTube on Wednesday, an unnamed man in the city of Kherson described the Ukrainian response to Russian tanks in the city center.

The video, titled “Kherson is Ukraine,” was posted by Kherson Now, a video channel that publishes “socially relevant events and stories of Kherson,” according to the channel.

“The people are ready to pull together, and even if it is necessary to arm themselves and drive the enemy out of our land,” the man said in the video.

Kherson, a key southern city along the Black Sea, was the first major city to fall to Russia on March 2. Home to nearly 300,000 people, the strategic port was besieged by Russian troops and tanks following days of fighting in the area that left approximately 300 Ukrainians dead, according to government officials.

Since the city was seized last week, hundreds of Ukrainians have taken to the streets to protest the Russian occupation. Over the weekend, the city’s mayor estimated that nearly 2,000 people attended a protest in Liberty Square, according to The New York Times.

“They are afraid of us so they put up fortifications,” the narrator said, gesturing to a line of tanks parked some yards away from the crowd of demonstrators.

“When I was there, I was talking to the soldiers, they were really scared,” he added.

The man said the Russian troops threatened to shoot if protesters stormed the administration.

A separate video reviewed by Insider showed Russian troops attempting to disperse crowds by firing into the air during a previous demonstration.

“They really know that people can’t be stopped,” the man in the Kherson Now video said.

Still, he added, Ukrainian people are afraid themselves as well.

But despite that fear, he said Ukrainians are prepared to fight.

“We are ready for absolutely any scenarios and will resist any Russian scenarios,” he said.

Ukraine’s military high command said on Wednesday that more than 400 protesters in Kherson had been detained by Russia’s National Guard, according to Reuters.