Why rich people steal and the phenomenon of ‘nonsensical shoplifting’ 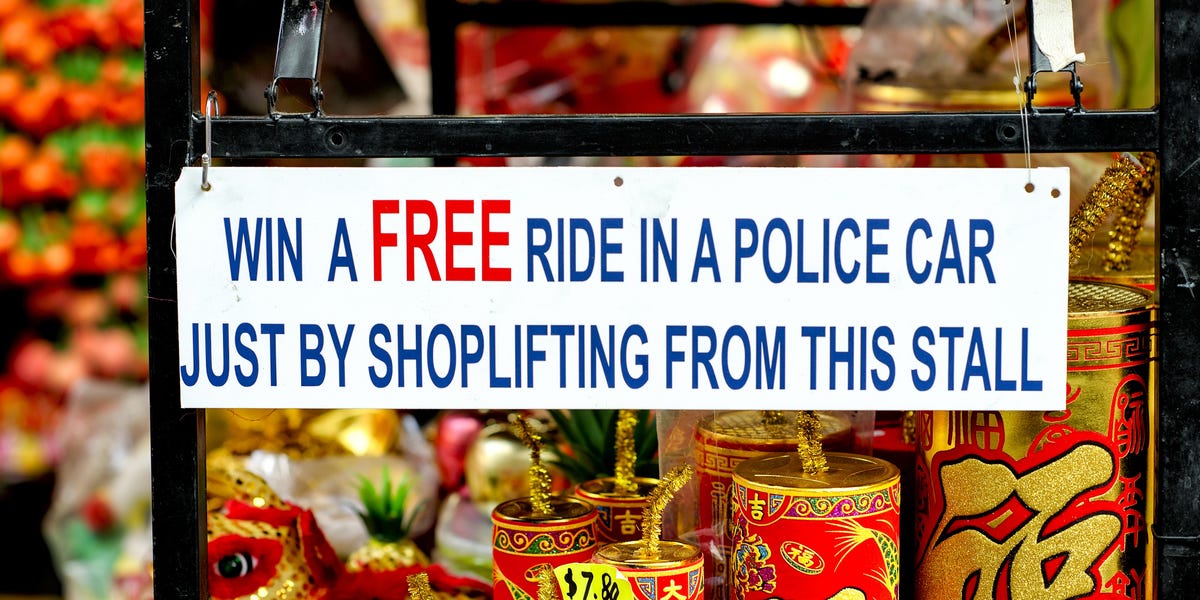 It was the gold-plated hairdryer that surprised him the most, and not just because gilding that gadget seems so unnecessary.

Tassilo Keilmann, the CEO of German-language spa and hotel guide Wellness Heaven, surveyed hoteliers from across the world seeking details on the items stolen from their properties in September and October last year. He was astonished at the loss of that “Goldfinger”–worthy trinket, pilfered from the bathroom of a six-star hotel in Dubai. Just as surprising was the story of how professional mechanics dismantled a Tesla supercharger from the garage of another property in Italy.

As for mattresses, GMs told him it was commonplace for them to go AWOL. Usually, Keilmann explains, they’re bundled into service elevators late at night, but at one high-end hotel, the thieves were more brazen. “They caught them on the security camera, throwing it out of the window — it bounced into the parking lot, where someone drove up and put it in their car,” he told Business Insider.

Aside from the ingenuity of such dishonesty, another element of the survey stood out to him: the likelihood of high-end items, whether TVs, pianos, or even artwork, being stolen at the priciest hotels was higher than at four star properties. Wealthy guests, in other words, had stickier fingers than ordinary travelers.

“It’s the perfect crime, because five star hotels don’t really want to go to the police and risk their reputation, with officers walking around among the other guests,” Keilmann said.

It isn’t just hotels that face such elite underhandedness, either. Consider the shoplifting problem at high end retailers. One 2008 study in the American Journal of Psychology suggested that wealthy people — considered as those with family incomes over $70,000 for the study’s purposes — were 30% more likely to steal from any store than those who made $20,000.

Of a series of high-profile cases in past years, perhaps the most infamous is Winona Ryder’s. The movie star made headlines almost two decades ago when arrested trying to steal from Saks. She initially claimed it was research for a role, then blamed a rogue prescription; she was convicted and sentenced to probation. In 2011, police nabbed model and party staple Beata Boman for stealing an $11,000 scarf from a department store in Connecticut; her dog-ate-my-homework excuse involved a distracted state induced by a phone call from a sick friend. “Anyone who knows Beata knows she has no need and no reason to steal anything,” said her lawyer in her defense. Two years later, after Boman completed an 18-month rehab program, charges against her were dropped.

And last year, multimillionaire Andrew Francis Lippi III was arrested for trying to bilk Kmart via fraudulent returns worth around $200; he had bought an $8 million island in the Florida Keys a week earlier. He had little explanation to offer.

Such petty pilfering among one percenters isn’t driven by need; it’s a phenomenon known as “nonsensical shoplifting.”

Criminologist and former retail store detective John C. Brady has spent his career tracking this phenomenon. One former patient, who lived in a $10 million mansion in the hills of Silicon Valley, was arrested for stealing a tube of toothpaste at 4 a.m. from her local supermarket. “She was already on probation and when she was arrested, she said to the cop ‘Go ahead and shoot me!'” Brady, the author of “Why Rich Women Shoplift,” told Business Insider.

Another was chased back to her equally lavish home by a store detective in her Mercedes. As she pulled up the circular drive, she tossed the evidence of her larceny — a can of corned beef from the local gourmet market — out of the window. After her arrest, she focused mostly on the inconvenience of being banned from shopping there again.

“It was more important for her to have social recognition than face the fact she was a shoplifter,” Brady said.

One percenters don’t steal in spite of being rich — they steal because of it.

Why, then, do rich people steal? It’s the wrong question to ask, according to Paul Piff. He’s a professor at the University of California Berkeley who’s spent his career exploring the relationship between money and morals. Better to ponder, instead, why they don’t steal.

“The more money you have, the higher in status you are, the more self-focused you become and are more prioritizing of your own self-interest,” Piff told Business Insider. “They tell themselves justifying narratives that excuse their behavior, not as immoral, but rather a necessary outcome of their circumstances.”

In 2010, he had worked with 124 participants, a combination of community members and students, on another research project that explored the same terrain. When Piff gave $10 to volunteers, he offered them the chance of keeping it or gifting a portion of it to an anonymous stranger. As income went up, giving went down consistently. Participants earning $150,000 or more per year averaged a $3 giveaway. The overall average for the entire study was $7.

Want to take candy from a baby? Ask a rich white friend to do it.

In a study Piff conducted with his colleague Dacher Keltner, he looked at whether rich people were more likely to take candy from a baby.

First, they asked 129 female undergraduates volunteers to rank themselves with relation to 10 socioeconomic groups — where did each woman see herself, comparatively? Mindset adjusted, Piff and co then handed each participant a jar of sweets containing around 40 pieces of candy. The candy, they were told, was for kids in a lab nearby but they could have some if they wished. Sure enough, those who considered themselves wealthier — that is, placed themselves at the higher end of that 10-step economic ladder — grabbed larger handfuls.

The low risk of the activity for wealthy folks helps drive this behavior, according to Rachel Shteir. She’s the author of “The Steal: A Cultural History of Shoplifting.”

“To a lot of wealthy people, it becomes like a video game, trying to get away with it and outsmart store surveillance,” Shteir told Business Insider. “I’ve interviewed very wealthy people and they often feel that they’re entitled to swag.”

Race and class safeguard them from feeling vulnerable, or even criminal, she said: “If you’re a middle class, white shoplifter, it’s really hard to get a prison sentence. Judges are just not that eager to send people to jail for this.” If you’re born and brought up rich, you’re also indemnified from consequences, or much guilt — Paul Piff’s recent work suggests that inherited wealth exacerbates these self-regarding tendencies more than self-made money might.

Sex and shoplifting make for a natural pair

Perhaps that’s the explanation for the most unusual culprit John Brady ever tracked down: a woman, married to a neurosurgeon, who had a secret room her husband and kids were not permitted to enter. There, she stored hundreds of designer purses she had stolen from department stores, much like a shrine; he estimates the contents were worth around $500,000.

Her shoplifting wasn’t about self-regard, or lack of consequences, though: “Some people have fantasies about stealing, and for her, that was the case: she would go in there to feel sexually aroused.”