Zelenskyy Thanks Russia Editor Who Stormed Broadcast With Protest Sign 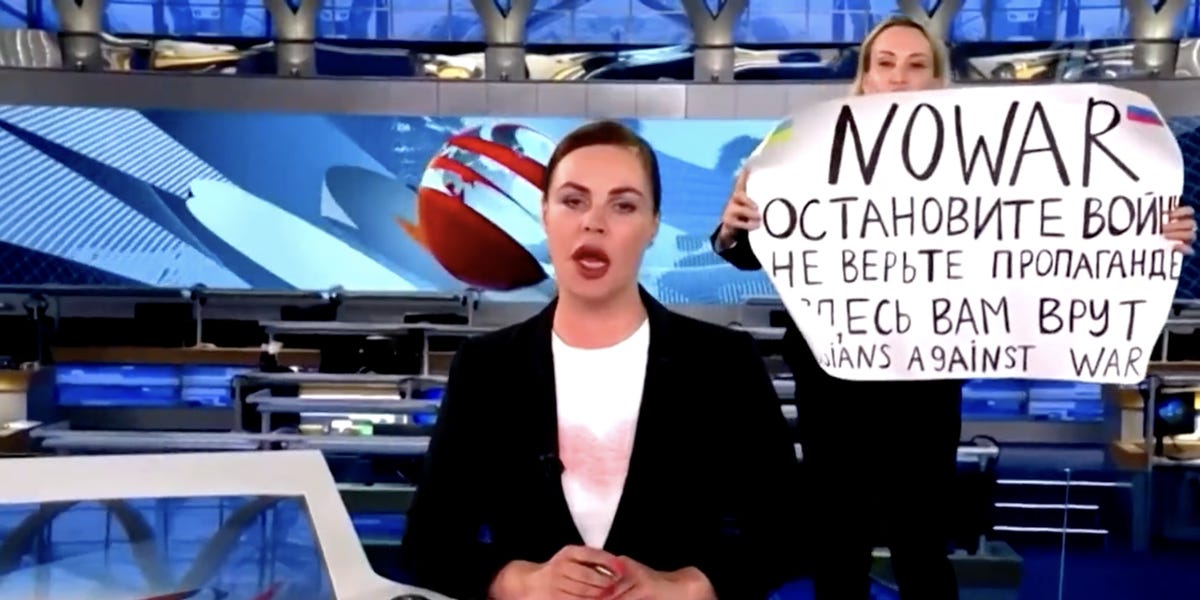 On Monday, Marina Ovsyannikova walked behind the host during the “Vremya” news show on Channel One, carrying a banner reading “they are lying to you” and shouting “stop the war!”

After Ovsyannikova appeared on screen, the live feed cut to footage from a busy hallway. The state-run TASS Russian-state news agency later reported that Ovsyannikova was arrested.

“I am grateful to those Russians who do not stop trying to convey the truth. To those who fight disinformation and tell the truth, real facts to their friends and loved ones. And personally to the woman who entered the studio of Channel One with a poster against the war,” he said.

Ovsyannikova explained her decision to speak out in a pre-recorded video, saying she had been “working on Kremlin propaganda” and was “very ashamed.”

Russian state-run media outlets are heavily censoring news of the Ukraine invasion, and earlier this month President Vladimir Putin approved a law that effectively criminalizes referring to the invasion as a war or invasion.

The independent Russian newspaper Novaya Gazeta covered the news of Ovsyannikova’s protest but blurred out the text on her banner.

“A girl appeared with a poster, the full content of which we are forbidden to transfer,” Novaya Gazeta reported Monday, referring to the new media law.

The Russian government refers to the invasion that began on February 24 as a “special military operation.”

“But why should you die? What for? I know that you want to survive. We hear your conversations in the intercepts, we hear what you really think about this senseless war, about this disgrace and about your state. Your conversations with each other. Your calls home to your family. We hear it all. We draw conclusions. We know who you are,” he said, without giving further specifics.

“On behalf of the Ukrainian people, I give you a chance. Chance to survive. If you surrender to our forces, we will treat you the way people are supposed to be treated. As people, decently. In a way you were not treated in your army. And in a way your army does not treat ours. Choose!”