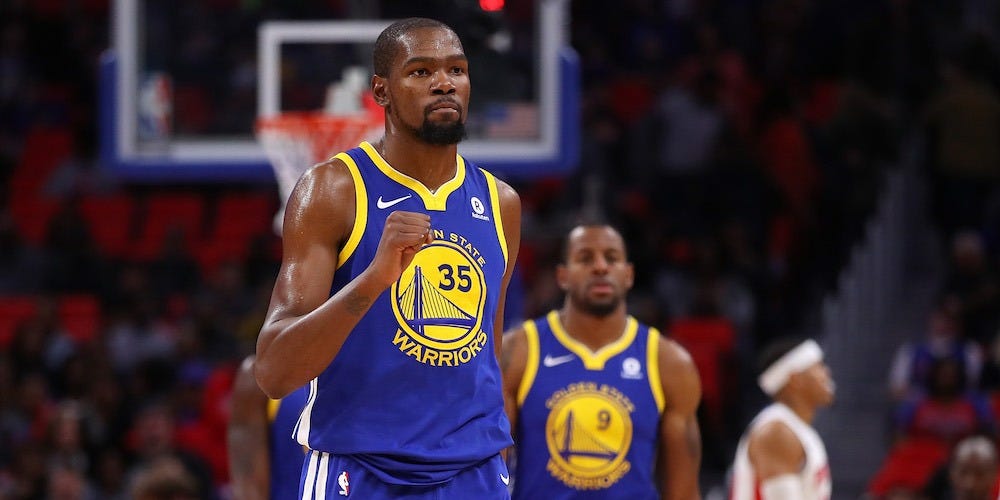 I’ve read more than 1,000 profiles since I started writing The Profile in 2017, a weekly newsletter featuring the best long-form articles of interesting people and companies.

The stories have included high-profile figures like Elon Musk, Sheryl Sandberg, Jay-Z, and Harrison Ford. But they’ve also included some not-so-high profile people like the man who deactivated Donald Trump’s Twitter account and the woman who brought Uber to its knees.

Here are the 11 lessons I’ve learned thanks to the most successful people in the world.

1. Surround yourself with the people you want to become.

There’s a saying that goes, “Show me your closest friends, and I’ll show you the future.” No one knows this better than basketball star Kevin Durant.

While he was winning NBA championships, he was also quietly becoming one of the most active angel investors in the league. He has surrounded himself with some of Silicon Valley’s elite: Ron Conway, Chamath Palihapitiya, and Ben Horowitz. There’s no better way to learn than to befriend the people whose path you admire.

“‘I started to read, to really read, about all these successful men who hadn’t played basketball,’ Durant remembered. He devoured books on Jeff Bezos and Steve Jobs — ‘I went all the way back to [Nikola] Tesla and [Cornelius] Vanderbilt.'”

2. You can be more than one thing in life.

Charlene de Carvalho was a 47-year-old stay-at-home mother of five when her father died and left her the family business. Not a big deal until you realize the family business means running Heineken, which employs more than 73,000 people. Carvalho had 10 days to make a choice: continue living comfortably as a housewife, or run the world’s No. 3 brewer with no prior business experience. She chose the latter, and she’s now one of the world’s wealthiest women.

Not convinced? Here’s another example: Hatem El-Gamasy makes sandwiches by day at a Queens bodega and appears on Egyptian TV news by night. When he gets a call from the producer, he puts on his suit jacket, heads to his makeshift studio, sits on a toilet seat, and looks into the camera to discuss the latest news event.

It’s never too late to reinvent yourself.

“The fear for being exposed is that they’ll say, ‘He’s just a sandwich guy. How does he talk about these big issues?’ said Mr. El-Gamasy, 48. “But I’m also an educated guy and being a sandwich guy is not against the law.”

3. Commit to the process. Results take care of themselves.

A wise person once told me that persistence is the No. 1 indicator of success. You have to commit to something and then refine the process over and over again. The results will follow. Alabama football coach Nick Saban has a vision he literally calls “the process” — a philosophy that emphasizes preparation and hard work over results.

It’s about constantly examining weak spots and gradually improving. If you fall short, you work to meet the standard of excellence next time. And if you win, you work to fight off complacency. The process, then, is never over.

4. Fame and money won’t fulfill you.

Most people want to be admired and successful. Many times, though, it’s a recipe for disaster. Just look around. We’ve got Elon Musk: a genius who’s dealt with toxic relationships his entire life. Brad Pitt: a seemingly happy family man with a serious drinking problem. George Clooney: the “Sexiest Man Alive” with a model on each arm fighting chronic loneliness.

The quote below made me realize something important: We are all Musk, Pitt, and Clooney — just with a lot less fame and money. If you don’t feel satisfied with yourself now, what makes you think that *insert the thing you want most here* will solve your problems? That’s not how life works.

5. It’s hard, but necessary, to be honest with yourself.

Many of us are unaware, or perhaps unwilling, to recognize what it is we’re fighting for. Basketball sensation Allen Iverson was in court to finalize his divorce, and the magnitude of the situation hit him when he saw “Iverson vs. Iverson” written on the divorce document. “You look across that courtroom and see the person you love more than life itself, and you get the picture. As strong as I am, that was my vulnerable moment,” he said. This moment caused Iverson to refocus on being a better father and partner.

So how can we make sure that it’s not too late before we snap back into reality? It comes through self-reflection and transparency. In one of my favorite profiles, Jay-Z opens up about about everything from his marital troubles to his time in therapy. The most difficult thing, he says, is to be honest with yourself.

“You know, most people walk away, and like divorce rate is like 50% or something ’cause most people can’t see themselves. The hardest thing is seeing pain on someone’s face that you caused, and then have to deal with yourself.”

6. One voice can be more powerful than all the money in the world.

How many times have you had an opinion that was squarely in opposition with the crowd? Probably a lot. But many of us have believe consensus is good and challenging the status quo is bad, so we keep our mouths shut. Allow me to introduce you to Susan Fowler, the 26-year-old whistleblower who brought the world’s most valuable private tech company (Uber) to its knees. One voice versus billions of dollars. It was obviously hard, but she did it anyway because it was the right thing to do.

Here’s another example: In one of the most spectacular flame-outs in recent years, Elizabeth Holmes’ blood testing company Theranos went from a $9 billion Silicon Valley unicorn to a unicorpse after a Wall Street Journal reporter brought down the house of cards.

The most powerful people are those armed with facts, data, and ethics.

“Silicon Valley, which is 50 square miles, has created more wealth than any place in human history. In the end, it isn’t in anyone’s interest to call bullshit.”

7. Pain and reflection lead to progress.

Almost all of us expect honesty in our personal and professional relationships. Very few of us demand it.

Ray Dalio, the man who built the world’s most successful hedge fund, encourages radical transparency and organizational dissent. Bridgewater employees grade each other on criteria like assertiveness and open-mindedness, and critique their colleagues and managers regardless of rank. The hope is that if you’re transparent with your ideas and reasoning, then the best ones can win out in an idea meritocracy. The Dalio machine runs on one equation: Pain + Reflection = Progress. Not a bad thing to try out.

“I believe that the biggest problem that humanity faces is an ego sensitivity to finding out whether one is right or wrong and identifying what one’s strengths and weaknesses are.”

8. The biggest successes can come from the most devastating failures.

Russian chess expert Lev Alburt has played chess with some of the highest-profile figures in finance, including Carl Icahn and Stephen Friedman. The financiers took lessons with Alburt to get “frustrated, intimidated, and demoralized.” Why? To grow. When you grow, you get better. And if you get better, you eventually win. That’s why most of our biggest successes often come after our most devastating failures.

Another story that stuck with me was that of retired NFL player Ryan Leaf. While in the league, he valued only three things — money, power, and prestige. After getting released from several teams, Leaf developed a painkiller addiction, attempted suicide, and committed burglary. What saved his life? A 32-month prison sentence. It wasn’t until his cellmate told him to go to the prison library and teach inmates to read that he woke up from his haze. “You’ll feel like for the first time in your life that you’re doing something for somebody else,” he wrote. “That it’s not all about you. And your narcissism will start to wane.”

Life will smack you around once or twice or ten times, but nothing will change until you turn your mistakes into lessons and start growing in a different direction.

“You’ll retire, thinking it’s over and that you won’t have to deal with the pain of being a failure anymore. You’ll just walk away from the game.”

9. Reality is all about perspective.

This is a tough lesson because you can’t truly understand it until you’re faced with unimaginable grief. One story we can all relate to is the loss of a loved one.

Sheryl Sandberg’s husband died suddenly five years ago. After his death, Sandberg texted Facebook CEO Mark Zuckerberg saying, “Urgent, Please call.” Zuckerberg thought it was a work issue even though she was on vacation. “A lot of things used to be ‘Urgent, please call,'” he said. “These days they’re not.”

All it takes is one moment to make you identify the true “urgents” in your life.

“Expressing emotion when you’ve gone through extreme pain is not weakness. It is humanity.”

I’m a big subscriber to the notion that your personal life should be exactly that — personal. No one needs to know intimate details about it unless you choose to share them. Harrison Ford reaffirmed my view. Ford rarely does interviews. And when he does, he has a repertoire of stories that he repeats to the media over and over again.

When he strays from his script, he gets physically uncomfortable. It’s not that he cares about what people think, it’s that his most intimate thoughts are “nobody’s f—–g business.” Don’t talk about it. Instead, do it and then let others do the talking.

“It’s always better not to talk about it, I think. Just fucking do it. Don’t ‘splain it. Especially if you’re getting away with it.”

11. It’s your responsibility to pay it forward.

The biggest lesson I learned from reading thousands of profiles is that we have a responsibility to pay it forward. I see it constantly. I see LeBron James and his wife Savannah working with low-income, at-risk students in their hometown. I see Priscilla Chan and Mark Zuckerberg running one of the most ambitious philanthropies in the world. I see Chobani CEO Hamdi Ulukaya giving jobs to immigrants and refugees at a time when they need them most.

This one hit home for me because when I was little, my parents were working up to three to four jobs, and money dictated every decision. It wasn’t easy to see a way out.

But even during the most grueling times, I will never forget the teachers, tutors, mentors, and kind strangers who gave me something money could never buy: hope.