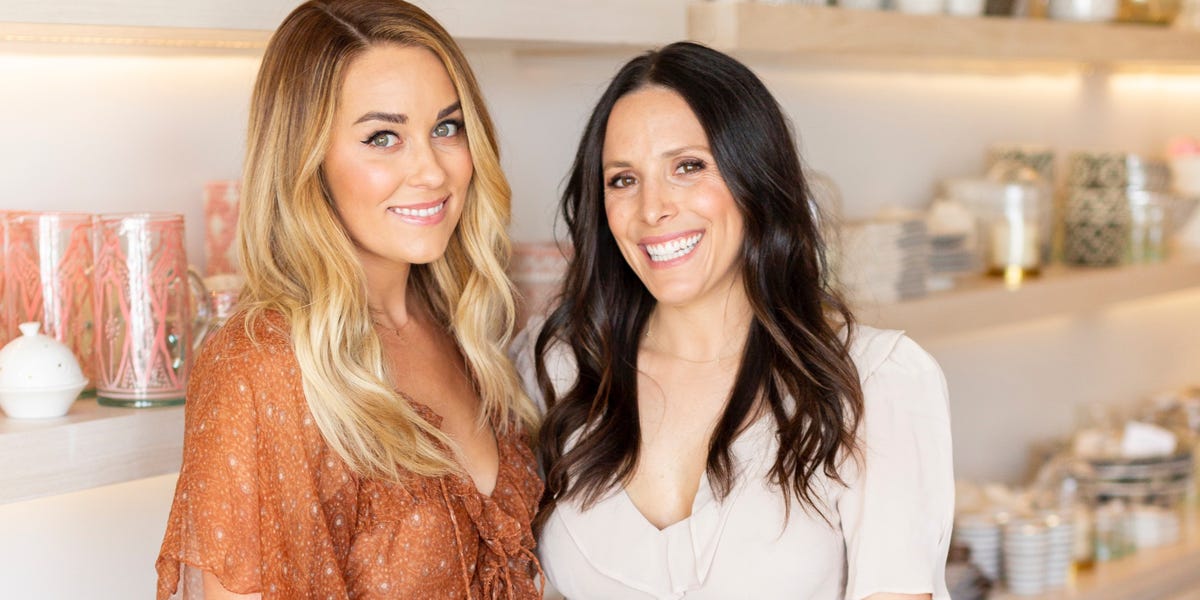 Creative entrepreneurs and small business owners often learn about leadership in unique ways as they scale up and build out their teams. Management truisms that might be taken for granted in larger companies tend to remain more squarely at the mental forefront for founders of smaller businesses.

To give other managers some perspective, successful business leaders from a range of creative backgrounds shared the most important lessons they’ve learned and how those lessons helped them and their companies grow. These strategies can serve as a reminder about the importance of getting back to basics and thinking differently.

Across her multiple ventures in television, fashion, and writing, cofounder of nonprofit fair trade shop The Little Market Lauren Conrad (known from her days on “Laguna Beach” and “The Hills”) has learned the importance of building a team based on shared values. In the last year, The Little Market has sourced more than 65,000 units of ethically-sourced goods from artisans in underserved communities worldwide.

In the hiring process, Conrad pays particular attention to an applicant’s work ethic and passion for The Little Market’s mission. An applicant who comes prepared with substantial research about the company and its mission, as well as ideas for how their personal contributions can grow that mission, will often become the kind of intentional hire she’s looking for.

“When we hire purposefully, we find candidates who are excited about our mission and work,” Conrad said. “Finding the right team of people can make daily decisions easier, encourage leaders in their own roles, and keep everyone focused.”

Hannah Skvarla, who cofounded The Little Market with Conrad, also attributes the nonprofit’s success to the team’s willingness to stay ahead of industry changes.

In the early days of the company, Skvarla and Conrad realized there were few stores functioning both as nonprofits and fair trade shops. By combining both elements into a single business model, the founders anticipated industry evolution and differentiated themselves from the competition.

In Skvarla’s experience, empowering employees to learn about industry changes and brainstorm strategies for adapting to them will also make for a more agile, dynamic organization. The founders encourage managers company wide to prioritize team building activities — dance classes, team hikes, etc. — so employees feel comfortable and supported sharing knowledge and ideas when they’re back at their desks.

Stop trying to be and look perfect

Over the past 12 years, Emily Schuman has grown her personal blog into the lifestyle brand Cupcakes and Cashmere. Since 2008, she’s written two bestselling books, launched a clothing line and ecommerce shop, and built an online community with over one million social media followers and millions of unique monthly visitors to the site.

But in order to get bigger and better, she first had to make room for imperfections.

“I began to feel complacent by just showing such a small portion of my life [on social media], but worried it would damage the brand if everything wasn’t ‘perfect,'” she said. “On the contrary, readers found it refreshing and more relatable when I opened up the less curated parts of my life, which led to expanding our audience and brand into new areas.”

Schuman’s experiment with vulnerability started with blog posts about anxiety, feelings of professional inadequacy, and breastfeeding. Her anxiety blog post garnered such a strong reaction among readers that she took this honest approach to Instagram, where she posted crying selfies and images “that were a far cry from the Pinterest aesthetic that was getting popular on blog platforms when I first launched,” she said. Since then, Schuman said her openness about anxieties and fears have better connected her to more readers and customers.

Get comfortable with delegating

Tonya Dalton was forced to get friendlier with delegation in the early days of inkWELL Press Productivity Co., which has sold 350,000 planners and journals worldwide online and in 1,500 brick and mortar stores. Relinquishing control has become increasingly crucial as inkWELL has added new offerings.

The founder and CEO recently came up with a product called Morning Momentum, which sends daily texts to help entrepreneurs build momentum in their businesses. Her initial instinct was to manage every aspect of the project herself, but she ultimately divvied up pricing, design, tech, and marketing tasks to her team.

“If I had been doing every single task involved in the project, [Morning Momentum] would never have launched,” she said. “When you empower your team to move forward with the tools and support they need to do their individual part, that’s when you can focus on where it is you want to go as a company.”

Before cofounding Studio Simpatico — a boutique firm that supports clients like AdTheorent, Road Warrior, Harmless Harvest, and Brooklyn Botanic Garden with a range of services from web design to user experience — Tamara Olson worked as a design lead at Google, where she learned about the importance of interviewing people for specific and complementary skill sets.

The Studio Simpatico development team, she noted, is a prime example of the balance between big-picture thinking and project management abilities she aims to strike. One developer is “wonderfully detail-oriented” and focuses on “ensuring that front-end implementation matches the design,” she said. The other “is always up for a good, meaty, all-consuming puzzle and loves to dive into complicated JavaScript or an unknown API.”

“Though on the surface [our developers] share the same skill set, the fact that they have opposite things they love to do makes our team much more efficient,” Olson said.

“The success of your business and your team is a perfect reflection of you,” said Samantha Bennett, CEO of The Organized Artist Company, which offers courses and other resources to inspire creatives. Bennett reported that the company brings in half a million in revenue a year.

Bennett was reminded of her responsibility for the company when she launched a course in the fall of 2019 and encouraged a team member to take the lead with a new marketing strategy when early results were mediocre. The new approach made things even worse, resulting in zero sales.

“[The team member] and I had a frank, non-blaming conversation about where we thought things had gone wrong and what we could do better,” Bennett said. “In the next day’s team meeting, I acknowledged we had experienced a big belly flop, but hey — that’s how we knew we were trying new things.”

Bennett said they planned another course with all new content for later the same week, rethought the marketing strategy, and sold over $40,000 in 36 hours.

Don’t be shy about sharing your plans

In the process of growing her design business Pistachio by Elaine, interior decorator Elaine Burns opened up to friends, family, and professional contacts about her goals for the company. When she told a previous boss in another industry about her ambitions to take on larger projects — full homes rather than the single rooms she’d been working on — it was that former employer who connected Burns to two contacts looking for full-service home redesign. Those contacts have since become clients and have helped Burns double her revenue and triple her client base in just one year.

Look for opportunities to network outside of your industry and even in your personal life. Burns, for example, networks primarily through events at The Wing, where she’s built relationships and more widely shared her professional goals.

Be flexible with long-term goals

Founder and CEO of Filipino food company The Sarap Shop Kristen Brillantes has gained an appreciation for timing in her life as a multi-passionate creative entrepreneur. Although The Sarap Shop has experienced quick growth — the brand opened a food truck in just seven days, hit six figures within its first year, expanded to catering in year two, and grew to include a second location and packaged foods in the third year — Brillantes now works on mapping out longer-term business plans with multiple models, laying out a different sequence of steps in each.

“Sometimes, I’ll be really excited about an idea that really shouldn’t happen for another three or four years,” Brillantes said of longer-term plans like a brick and mortar location or a branded vending machine. “I think through what resources, skills, and time will be needed for that idea to have the best conditions to succeed, while optimizing along the way.”

This long-term mindset and flexibility around the sequence of steps necessary to reach each business goal has also opened up opportunities for The Sarap Shop, Brillantes noted. “If our plans were more rigid, we would not have been able to flex into the opportunity to be part of the first generation of food vendors inside the Chase Center [in San Francisco]. It wasn’t on our original roadmap,” she said.

Don’t waste your best working hours in your inbox

“Early in my business, when I obsessively checked my email, I found myself spending my best hours solving others’ problems and getting riled up when I received an email that contained something that frustrated me,” Zimmerman said. “When email had my attention, I found myself giving other people power over my schedule, my mood, and even the direction of my business.”

On the event planning side of her work, in particular, Zimmerman often found herself diverting the majority of her workday to responding to client emails about flower arrangements, squeezing in her own priority tasks while waiting for replies. To increase productivity, she told clients and colleagues that they could expect email responses within 24 to 48 hours of messaging her.

Zimmerman learned to fight the urge to respond to emails the moment they hit her inbox, giving her the space to respond to multiple questions at once if more came in later in the day. She also committed to using the hours when she worked most effectively to tasks outside of email.

“I know my best mental time is in the morning, so the things that will really move the needle in my business happen before lunch,” Zimmerman said. “I save checking my email for after lunch and I block off only 30 minutes.”