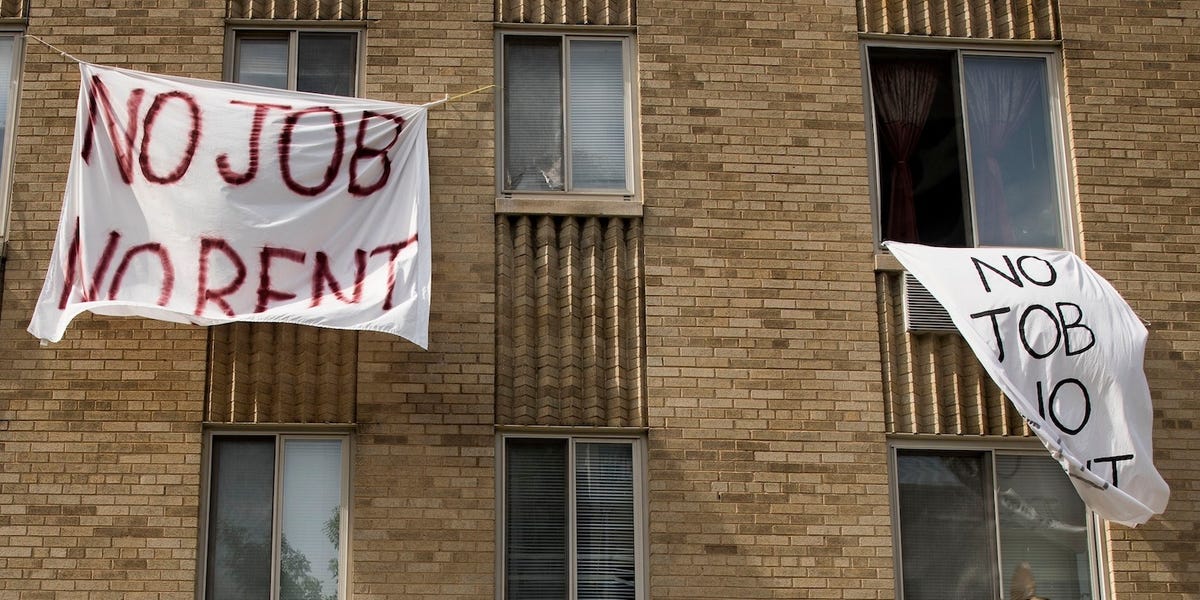 As the coronavirus infection spread across the country in February and March, it shuttered businesses and led to massive job losses. As unemployment soared, states and the federal government rolled out a medley of eviction moratorium to help people keep a roof over their heads.

But those bans have already run out in 29 states and are slated to expire in more, Reuters reported.

And Friday marks the end of the federal eviction ban, which forbids evictions for renters who live in buildings with US government-backed mortgages.

Emily Benfer, one of the creators of Princeton University’s Eviction Lab, told Reuters that a whopping 28 million Americans could lose their homes in the coming months as these bans expire. For context, about 10 million people were evicted following the 2008 financial crisis.

The American Apartment Owners Association reported equally dire findings. Around 60% of landlords said that tenants cannot make rent payments, while 80% expressed willingness to work with their tenants to come up with a solution, according to the organization.

“We made it pretty clear to our landlords that people aren’t just suddenly going to be able to afford to pay back everything they owe on one day. So it doesn’t make sense to create a plan that isn’t realistic,” Alexandra Alvarado, the association’s director of marketing and education, told CNBC.

The association suggested a number of steps for landlords, including checking in with renters, crafting a payment plan and putting it down in writing, contacting mortgage lenders for any relief they can offer, and investigating grace periods and deferments on tax and insurance payments.

“The rent itself has ripple effects for the entire community,” Benfer, who is also a visiting law professor at Wake Forest University, told CNBC. “When the rent isn’t paid, the mortgage isn’t paid, property taxes go unpaid, employees are unpaid, conditions that needed repairs are delayed. And the entire community ends up suffering — from the school system to services that the community provides to residents.”

House Democrats have pushed for a $100 billion national rental assistance program. Sen. Kamala Harris (D-Calif.) is also trying to offer relief to renters and homeowners. Her housing plan would forbid evictions and foreclosures for a year and give renters 18 months to return outstanding payments, the Washington Post reported.

However, neither idea has gotten very far with Republicans, the Post added.

The NAACP Legal Defense and Educational Fund is in favor of Harris’ proposal, according to POLITICO.

“In the midst of this pandemic, as state and local moratoriums end, we are facing the possibility of an eviction catastrophe,” the group’s president, Sherrilyn Ifill, told the news outlet. “We need immediate action to implement a national moratorium on foreclosures and evictions. No family should be concerned about losing their home during this pandemic.”