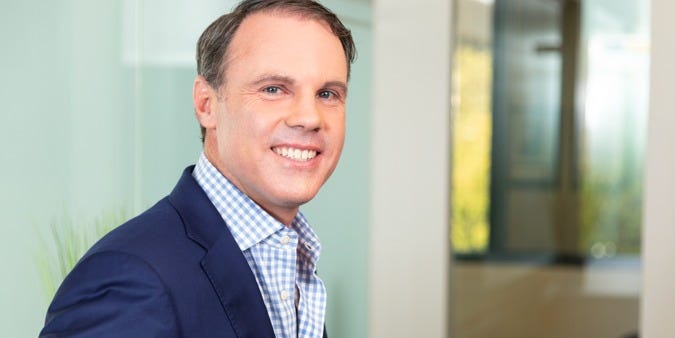 The COVID-19 pandemic has wreaked havoc on the US economy. At the beginning of June, the National Bureau of Economic Research officially declared that the country is in a recession, while companies have been forced to lay off millions of workers even as states reopens.

Getting your company acquired in a contracting economy may seem farfetched, but it’s not impossible, according to Brian Fox, president and founder of Confirmation, a financial data confirmation company.

Though the company now operates in over 170 countries, with over 16,000 accounting firms and 5,000 banks using its tools, it had a humble beginning in Fox’s grandmother’s garage. An electronic confirmation service that provides the network to verify assets like revenues, cash, receivables, and liabilities when companies go through a financial audit, Confirmation had to overcome two economic downturns as it grew — the dot-com burst and downturn following 9/11 and the 2008 Great Recession.

The company was built on a promise that its founder vowed to carry through.

“My first year of business school [in 1999], I took an entrepreneurship class and shared the business plan with my dad,” Fox said. “When he unexpectedly died in a hiking accident at the end of that year, my mom, brother and I used his life insurance policy as the seed capital for Confirmation.”

With the source of the money in mind, Fox said he felt great pressure to make Confirmation thrive.

“Right after I founded the business the dot-com bust happened, and then a year later 9/11 happened and the entire global economy crashed. I was a 26-year-old CEO of a dot-com, pre-revenue business,” Fox said. “Knowing that I was using the money he left us to start my business, I was determined to either succeed 100% or to fail 100%, and there was no quitting or giving up when times got really hard.”

Fox and his team at Confirmation persisted and now have spent 10 straight years on the the Inc. 5000. The Brentwood, Tennessee-based company said it posted nearly $37 million in revenue in 2019, processed trillions of dollars in financial data, and has caught billions of dollars of financial fraud.

Confirmation was in the middle of a growth spurt and had gone through a round of private equity financing when the team was approached about an acquisition.

“[A]t that point we hired William Blair, the investment bank, to help us because we were getting a lot of inquiries from folks who were interested in acquiring our business, even though we hadn’t intended to put it on the market at that point in time,” he said.

Last summer, the business was acquired for an undisclosed amount by Thomson Reuters.

Although Fox’s acquisition story reads a bit like a fairy tale, Chester Spatt, professor of finance at Carnegie Mellon University’s Tepper School of Business, said that businesses should take heart: Even in the COVID-19 and post-COVID-19 economy, the future of mergers and acquisitions may actually be quite positive.

“In light of the magnitude of the current shocks and the long-run potential transformations of various activities and services, the positive case for M&A seems much stronger than in a traditional recession or downturn,” Spratt told Business Insider. “The opportunity to exploit different synergies — including shoring up apparent weaknesses — for the new normal is huge.”

Fox’s journey with Confirmation provides an example of the tenaciousness needed to lead a company through the rough seas of recessions and downturns, and he gave Business Insider a few tips on positioning a company for acquisition amidst this chaotic economy.

According to Fox, the most important acquisition-positioning strategy entrepreneurs can undertake is making sure their balance sheet is firmly in the black.

“Having the ability to determine your own future because you’re cashflow positive is fantastic,” Fox said. “Do whatever you have to do to ensure you have enough cash on hand. Obviously, you want to push off expenses, you want to potentially work with your business partners to see if there are terms they can provide you, maybe longer payment terms — anything you can do to extend your runway.”

Fox said he believes the COVID-19 downturn will last for 18 to 24 months, and encouraged the use of outside-the-box thinking to beef up the bottom line while weathering harsh economic conditions.

“We ultimately issued more stock options in lieu of cash payments in order to conserve our cash,” he said. “We traded services so that both we and our partners could conserve our cash. Those were just a few techniques that helped us to see it through those difficult downturns in the economy.”

Your team is a major asset

Any entrepreneur positioning their company for acquisition should retrench in both directions on their organizational chart, Fox said, for two reasons: One, your team is your greatest asset in working through tough conditions, and two, a harmonious team that works together well is a strong selling point to interested parties on the outside.

Fox noted that when Confirmation was experiencing exponential growth, especially overseas, the company hired key players in several top positions, including bringing on a CFO for the first time and promoting a trusted long-time employee to the position of chief product officer.

“When we went through both the private equity funding round and then our sale just two years later, having a seasoned and accomplished executive team that was hitting on all cylinders and driving our growth was a critical component that allowed us to achieve the valuation multiples we wanted,” Fox said.

While Fox undoubtedly cashed in when Confirmation was acquired by Thomson Reuters, he said the most meaningful part of the deal for him was the team around him at the time.

“When I ended up selling Confirmation to Thomson Reuters, certainly it was a great opportunity for all the investors, but to me, the most personally rewarding component was the fact that the four of us who were in my grandmother’s garage when we started the business were there 20 years later when we sold the business,” he said. “That’s something you just don’t see a whole lot, and I think speaks volumes about the team we created.”

“The last and maybe most important piece of advice I’d provide to entrepreneurs is to find a great mentor,” Fox said. “My business partner Chris [Schellhorn], who had been the CEO of several successful businesses, coached and mentored me and made me into a much better leader. He kept me sane in the crazy times and was the person who guided me most in my decision making.”

Being an entrepreneur can be a very lonely process, so having several core support people to turn to is critically important — especially at milestones when you’re considering significant changes, like acquisition, that may represent progress but also complete upheaval.