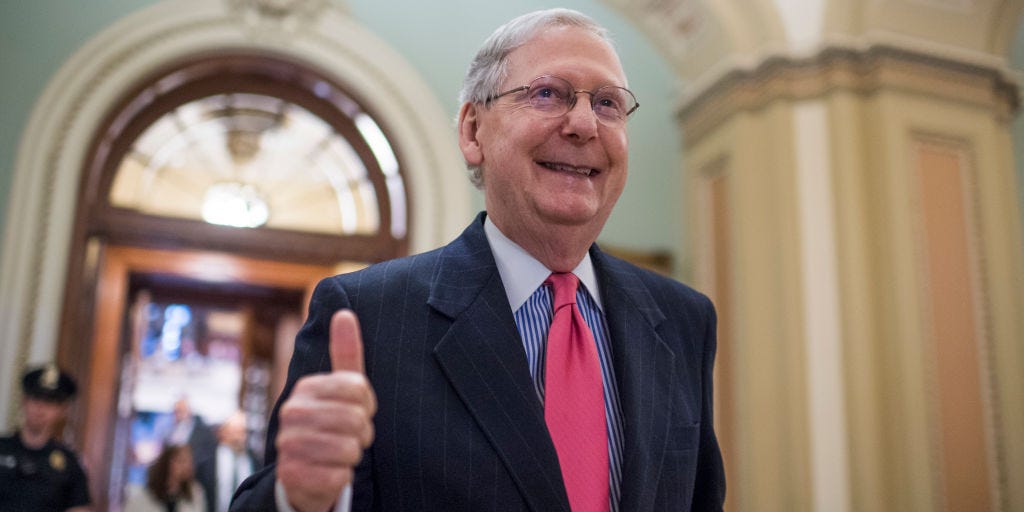 Republican Sen. Majority Leader Mitch McConnell said in an interview posted on Friday evening that part of the reason the payroll tax cut championed by President Donald Trump would not be included in the GOP coronavirus relief proposal was its lack of benefits for jobless people compared to a second stimulus check.

“I think we are a lot better off just to send another direct cash payment to those who have been left out of all of this,” McConnell told WKYT’s “Kentucky Newsmakers with Bill Bryant.”

He went on: “It’s the quickest and easiest way to get relief, “and said there was “bipartisan opposition” to the payroll tax cut.

The remarks from McConnell brings into sharp focus the unpopularity of the payroll tax cut in Congress. Congressional Republicans nixed the tax break earlier this week during negotiations with the White House on a $1 trillion coronavirus relief bill, The Washington Post reported on Thursday. Trump had previously insisted on including it in the legislation, saying it would put more money into workers’ pockets and boost the economy.

But the president encountered staunch resistance from other GOP senators.

Sen. Chuck Grassley of Iowa, the chair of the Senate Finance Committee, said on Monday a stimulus check would “do more economic good” than the payroll tax cut Trump had sought since the outbreak of the pandemic in March.

Trump assailed Democrats for opposing the tax cut in a tweet on Thursday, even though it was lawmakers from his own party that ultimately squashed it.

Economists and many lawmakers in both parties say reducing the amount of taxes taken out of employed people’s paychecks to finance Social Security and Medicare wouldn’t deliver any significant benefits for the estimated 20 million jobless Americans. The payroll tax cut bumps up wages over time across paychecks for people with jobs that they may not notice — while a stimulus check delivers a sizable sum of money up front that’s likelier to induce spending.

The GOP says it will unveil its legislation early next week after days of delay due to infighting. On Monday, McConnell said it would include a fresh round of stimulus checks for Americans, likely modeled after the first one.

In March, Congress authorized a wave of direct $1,200 payments for individuals earning up to $75,000 a year, plus $500 for each dependent child. The cash amount diminished until phasing out for those making above $99,000. Married couples earning up to $150,000 a year also qualified for the full payment.