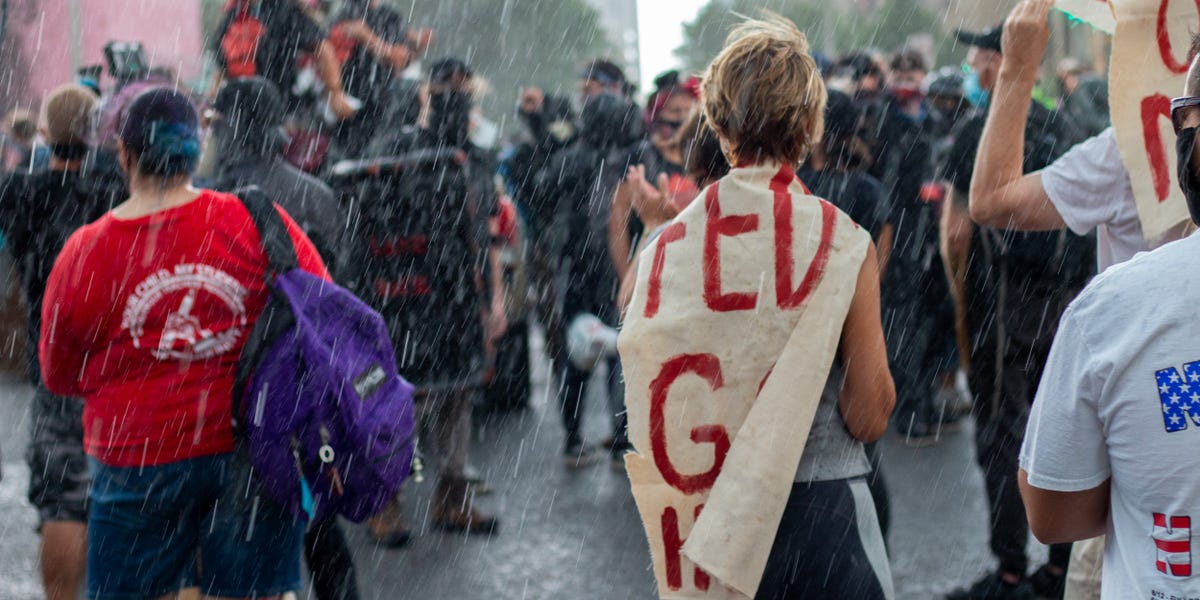 Unlike scenes in other cities, there were no clashes with police, who shut down streets — without leaving their vehicles — for marchers who chanted the names of people killed by law enforcement.

There were also no right-wing counter-protesters at the protest itself, the local militia movement shying away from Black Lives Matter actions after a fellow traveler assaulted a woman and shot a man at a protest back in June. However, some protesters later clashed with members of New Mexico’s far-right “Civil Guard” who had occupied a nearby cheesesteak shop, ostensibly to protect it but reportedly against the owner’s wishes.

After the rain cleared, a double rainbow appeared above the protesters.

The deployment of 35 agents, announced July 22 as part of what the US Department of Justice has termed “Operation Legend,” is ostensibly an effort to combat violent crime. But President Donald Trump sold the policy as necessary in Democratic-led cities, specifically, where he claimed local leaders with to “defund, defame, or abolish” police.

The president’s reelection campaign has also been flooding New Mexico’s airwaves with an ad seeking to tie Democratic rival Joe Biden to that activist demand.

The Red Nation, an indigenous-led socialist group, helped organize Friday’s protest outside the US federal courthouse in downtown Albuquerque.

“What we are seeing today is fascism in its most blatant and simple form,” the group said in a statement.

New Mexico’s Democratic leaders have also condemned the deployment, likening it to the show of force in Portland, Oregon, where Trump also drew ire from locals for sending federal agents to quell protests.

Marg Elliston, chair of the state’s Democratic Party, and Flora Lucero, chair of the Bernalillo County chapter, issued a joint statement criticizing the deployment as “out of line with the needs and interests of our communities.”

“Recently, we’ve seen how the Trump administration is willing to use federal officers to brutalize and intimidate peaceful protesters,” they said. “This kind of violence and suppression has no place in our nation.”

In a July 28 letter to Albuquerque Mayor Tim Keller, US Attorney John Anderson, a Trump appointee, argued the federal contingent was necessary due to the “concerning” pace of fatal shootings in the city, KOBO reported. Anderson maintained that no one should confuse or equate Operation Legend with the events unfolding in Portland, Oregon.

But Keller remains skeptical. He joined mayors from Seattle, Philadelphia, and Oakland on a July 29 phone call expressing opposition to the Trump administration’s use of force, saying federal agents have engaged in “totally inappropriate and often illegal behavior that is designed to incite violence and divide us.”