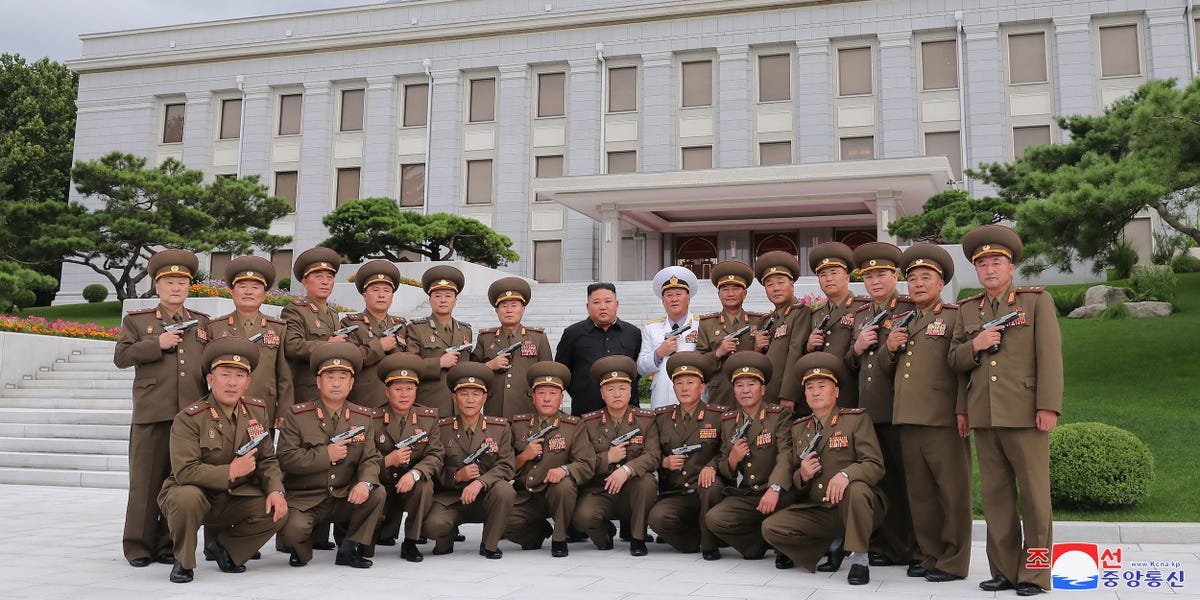 North Korean leader Kim Jong-un handed out dozens of pistols with his name on them to his commanders to celebrate 67 years since the end of the Korean War.

They were standing around Kim, who was in his usual black suit, as they celebrated the end of what is known as the “Glorious Fatherland Liberation War” in North Korea.

The guns were named after Mount Paektu, a dormant volcano that has great spiritual significance to Korean people.

Each pistol carried Kim’s name, which was meant to show his trust in his commanders, and his belief they would be loyal, KCNA reported.

In one of the photos, chief of the general staff Vice Marshal Pak Jong-chon, who was sitting to the right of Kim, made sure to point his gun directly up rather than having it aimed sideways at Kim, the South China Morning Post noted.

It was a stark contrast to how South Korea celebrated the anniversary, where masked veterans gathered for a ceremony, and all maintained social distancing, according to Al Jazeera.

Kim, who has not had many public appearances this year, also visited a cemetery, laid a single rose, and bowed down before a large monument.

He is attempting to bolster public support as North Korea deals with crippling sanctions and faces a possible coronavirus outbreak, The Washington Post reported.

On Sunday, a 24-year-old man with COVID-19 symptoms reportedly came back to the country after defecting in 2017. Kim was quoted saying the “vicious virus” might have entered North Korea.

A “maximum” national emergency was declared, and Kaesong, a city of 300,000 people, was put into lockdown.

The defector could be the first official case in North Korea, although experts are sceptical that North Korea has really had no other cases, according to The New York Times.