List of major company layoffs due to the coronavirus 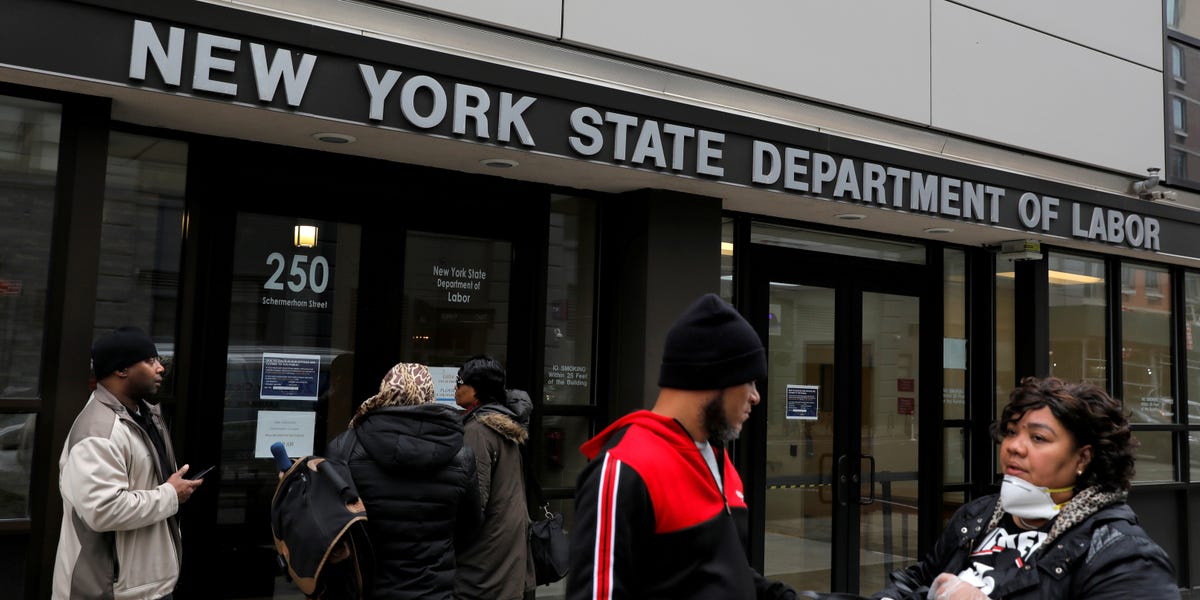 Department store JC Penney announced that it would shutter 152 stores and lay off 1,000 jobs in corporate and field management on July 15. The company filed for bankruptcy in May and furloughed thousands in April.

PVH Corp, the company that owns Calvin Klein and Tommy Hilfiger among other brands, announced that it is shuttering 162 stores and cutting 450 jobs, or 12% of its workforce, on July 14.

On July 9, Bloomberg Law reported that Wells Fargo is preparing to cut thousands of jobs out of its 263,000-person workforce.

Walgreens said it plans to cut 4,000 jobs on July 9, after reporting a $1.7 billion loss in the third quarter.

On July 8, United Airlines said it would issue layoff and furlough notices to 36,000 employees — more than a third of its entire workforce — including 15,000 flight attendants and 2,250 pilots.

Levi’s, the denim company, announced on July 7 it was slashing 700 jobs. The cuts account for 15% of its total workforce.

While Macy’s furloughed the majority of its workforce in March, it announced it would lay off about 3,900 corporate workers on June 25.

On June 16, a union representing AT&T employees said the wireless carrier will lay off 3,400 and shut down more than 250 stores.

Hilton Hotels announced it is laying off 2,100 corporate employees on June 16, amounting to 22% of its corporate workforce.

Boeing said it would lay off nearly 7,000 employees on May 27. The company initially announced that it would cut about 10% of its workforce on April 29. The company had 143,000 workers at the beginning of the year.

IBM will eliminate “several thousand jobs” as of May 22, mainly in the company’s technology-services division. Cuts come a month after new CEO Arvind Krishna withdrew IBM’s financial outlook amid economic uncertainty caused by the pandemic.

Weeks after ride-hailing giant Uber announced it is cutting 3,700 jobs (14% of its workforce), CEO Dara Khosrowshahi announced on May 18 that he will cut 3,000 additional jobs and close 45 offices.

Airbnb announced it is laying off about 25% of its workforce, or 1,900 employees, on May 5. Its severance package includes several months’ pay, a year of healthcare, and support finding a new job.

Richard Branson’s Virgin Atlantic announced it would cut 3,150 jobs on May 5, in addition to retiring its iconic Boeing 747-700 planes a year early.

In a leaked May 4 memo, United Airlines said it expects to lay off at least 30% or some 3,400 employees on its administrative staff on October 1.

Ride-hailing company Lyft is laying off 982 employees and furloughing another 288, accounting for 17% of the company’s workforce. The company made the announcement on April 29 and added that other cost-cutting measures include pay cuts for executive leadership.

On April 28, online travel company TripAdvisor announced it was laying off more than 900 of its employees, amounting to a quarter of its workforce.

On April 12, a union representing workers at Walt Disney World said the company will be furloughing 43,000 employees starting April 19. The amusement parks have been closed since March 16 and 200 essential workers will continue maintaining them.

On April 7, Tesla sent an email to employees saying it will furlough all nonessential workers until at least May 4, and reduce all employees’ pay by at least 10%. These cost-cutting measures are expected to start April 13.

JCPenney has already started furloughing workers and confirmed it would continue to furlough a “significant portion” of its 85,000 employees as of April 5.

On April 3, Under Armour announced that it will temporarily lay off about 6,700 employees starting April 12.

The Wing, a buzzy Instagram-ready women’s coworking company, is laying off nearly all of its hourly employees and half of its corporate staff as of April 3, according to Vice. The company confirmed the layoffs but did not elaborate on numbers. Its founders are foregoing their salaries.

ClassPass, the billion-dollar fitness platform, furloughed or laid off over half of its 700 employees on April 2 — 22% were laid off and 31% were furloughed.

On April 2, airplane manufacturer Boeing announced that it would offer a voluntary layoff plan to employees to cut costs. Those opting into the layoff plan will leave with a pay and benefits package, but the company offered no details about compensation.

Famed auction house Sotheby’s is furloughing 200 people — or 12% of its workforce —as of April 1, according to the Wall Street Journal.

Sephora laid off over 3,000 employees across the US via conference call on March 31. “It is our sincerest hope that we are able to bring these employees back on staff in the near future,” Sephora said in a statement.

Macy’s CEO Jeff Gennette informed his staff via email that the company would be furloughing most of its 125,000 employees on March 30. The company only plans to have work for “the minimum number of employees necessary to maintain basic business operations” across Macy’s, Bloomingdale’s, and Bluemercury, Gennette wrote. He will stop receiving his salary, along with the rest of the board of directors.

Bird, the buzzy electric scooter company, laid off 30% of its staff via a Zoom call on March 27. The call lasted only around 2 minutes.

Everlane, the clothing retailer focused on ethical sourcing, laid off over 200 employees and furloughed 68 others on March 27. CEO Michael Preysman will reduce his salary to zero.

Sonder, a billion-dollar apartment-rental startup billed as a hospitality industry disruptor, laid off or furloughed 400 people — one third of its workforce — on March 24, according to The Information.

GE announced that it will be reducing approximately 10% of its aviation unit’s workforce, amounting to about 2,500 employees, on March 23. It also announced a three month furlough impacting 50% of its maintenance and repair employees. GE CEO Larry Culp will forgo his salary for the rest of the year, while GE Aviation CEO David Joyce will give up half of his salary.

According to the Washington Post, at least 200 workers across President Trump’s hotels in Washington DC, New York City, and Las Vegas were laid off as of March 20. Other Trump properties, like Palm Beach’s Mar-a-Lago, have temporarily closed.

Marriott International, the world’s largest hotel company, said it has started to furlough what could amount to tens of thousands of employees on March 17. Furloughs, as opposed to layoffs, occur when employees are required to take an unpaid leave of absence. Arne Sorenson, the president and CEO, announced that his own salary will be suspended for the rest of the year and senior executives’ salaries will be reduced by 50%.