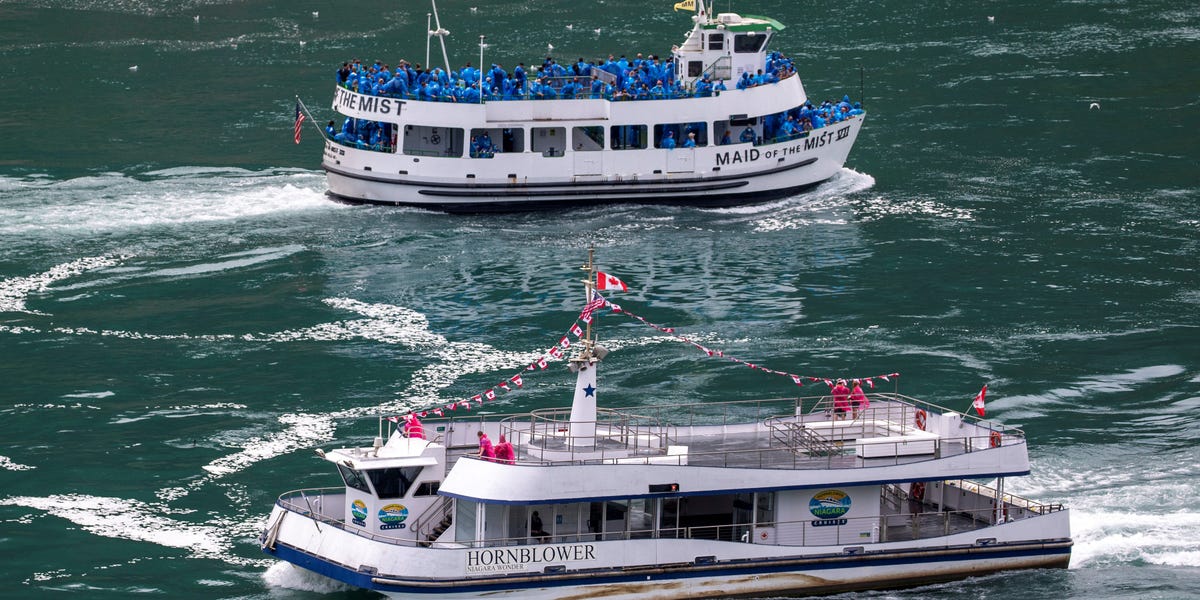 On Wednesday, two tourist boats came to the forefront of the ongoing debate about social distancing.

Maid of the Mist, based in Buffalo, New York, offers boat tours that give tourists an up-close look at Niagara Falls. Its Canadian counterpart, Hornblower, offers roughly the same service, just from across the border. The experience ($22 and $34 CAD respectively) is similar, no matter where it starts: Tourists don a disposable plastic raincoat — blue for American visitors, red for Canadian visitors — and board the boat, which goes so close to the falls that people on board are drenched by the mist.

On Monday, the two boats were photographed next to each other by Reuters — Maid of the Mist teeming with tourists, while the Hornblower had only six people on board.

And this is what the Canadian boat looked like:

Kevin Keenan, a spokesperson for the American company, told Business Insider that on average the boats have had roughly 163 people on board at a time since the start of the season. He added that there are social distancing markers throughout the facility and that guests are required to wear masks.

Additionally, the company website notes that staff members undergo a health screening at the start of their shifts and that there are hand sanitizing stations at different points in the touring facility.

Most regions in Ontario, the province where Niagara Falls is located, entered stage 3 of their reopening today, July 24, which allows almost all businesses and public spaces to reopen but keeps high-risk areas, like amusement parks and buffets, closed.

Mory DiMaurizio, general manager and vice president of Hornblower, told Business Insider that under stage 3 of Ontario’s reopening, up to 100 people will be let on board at once.

As of Friday, the US had reported over 4 million total confirmed cases of the coronavirus compared to Canada’s 114,679, according to Johns Hopkins data.

While wearing a mask and social distancing is highly encouraged across the US to contain the spread of the deadly virus, mandatory mask policies have become a widely debated and politicized issue, with some people flat out refusing to cover their faces, citing personal liberty and conspiracy theories.

How Canadians feel about government policies aimed at curbing the spread is markedly different. Angus Reid Institute, a Canadian non-profit research group, published a study this week sharing that nearly half of all Canadians believe that their fellow citizens would comply with a lockdown if a second wave were to arrive.